Houston Texans star Deshaun Watson might be getting closer to putting his legal issues behind him, but the Pro Bowl quarterback might still be facing a suspension for the 2021 NFL season.

The 25-year-old was first accused in March of sexual assault, with a masseuse filing a civil suit against one of the NFL’s biggest stars. Watson responded to the first allegations, instantly denying them. Before long, more women came forward with more than 20 civil suits filed against Watson.

It didn’t take long before the NFL launched an investigation and the Houston Police Department is conducting its own inquiry into some of the accusations. In three months, Watson went from the hottest name in NFL trade rumors to being off the radar with his professional career in doubt. 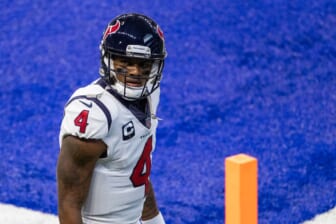 Suddenly, the eight NFL teams that explored a blockbuster trade backed off. Meanwhile, the Texans started preparing for a future without Watson. Recognizing that it was time to find a new quarterback, Houston signed Tyrod Taylor, drafted Davis Mills and traded for Ryan Finley. Now, the Texans are ready to deal Watson.

Things might be taking a positive turn for the NFL star. A judge ruled that the 22 civil suits must be filed jointly with the women required to reveal their identities. Since then, there have reportedly been talks about a settlement that would avoid a court battle and would allow Watson and the women to speak publicly.

Will Deshaun Watson be suspended?

The NFL, NFLPA and commissioner Roger Goodell have all addressed Watson’s ongoing legal issues. But with all of this occurring during the offseason, the league hasn’t had to take any immediate action other than opening an investigation. But that will soon change.

Watson never planned to play for the Texans again and likely would have sat out training camp and the preseason to force a trade. But with everything going on, Goodell will likely place him on the Commissioner’s Exempt list. It would be an indefinite placement, with Watson on paid leave and required to stay away from the team. Once the investigation wraps up, discipline could be handed out.

Sports Illustrated’s Albert Breer believes Watson will be suspended for a period of time this season. The NFL doesn’t need Watson to be found guilty, he can be suspended if it’s determined his off-field behavior hurt the NFL’s image. Given this is one of the biggest stars in football and there will always be questions about whether or not he did it, the NFL will likely determine a suspension is necessary.

Once that decision is made, the trade market will heat up. NFL teams are more than willing to take a chance on a player with behavioral issues or off-field concerns, even if it means there will be a backlash. Given Watson’s skills, multiple clubs will view him as the kind of player who can transform a good roster into a Super Bowl contender. All things considered, it would be a surprise if Watson isn’t suiting up for another team this fall.