How much does an athlete owe fans, the media and the world of social media in 2022?

Not very much and one NFL quarterback is letting you know.

Las Vegas Raiders quarterback Derek Carr explained on Twitter why he blocks reporters, fans and critics alike from access to his account. One of the Raiders’ biggest leaders delivered sound reasoning that sounds pretty healthy in an online environment where that is rare.

The question of how much abuse or criticism a professional athlete or celebrity should take in social media generates plenty of discussion among NFL fans. For Raider Nation, the perplexing and polarizing nature of Carr amplifies that.

Carr has been known to block everyone from critical fans to media who cover him. It’s led to many sometimes wondering what they did to deserve the online door-slam by the veteran quarterback.

Debate or good-natured disagreement is one thing. It’s hard to argue with Carr’s point of view here and I tend to agree with him wholeheartedly. Having spent five years covering the Raiders, the amount of vitriol directed at Carr is obscene. Why should he put up with it? Why does he have to make his social media feed available to those who bring mostly negativity to his digital door?

While Carr readies for a nice contract extension, and those Raiders “fans” who make part of their day focused on railing against his talent, he’s decided to opt-out of engaging with you. Good for him.

Everyone is entitled to their opinion. However, Carr is also entitled not to give a damn about yours or turn you off. Some might call him “soft” or point out that it shows his inability to handle criticism, but I disagree with both assertions.

Carr is protecting his mental space and what he spends his time on. If it’s negative and doesn’t help him achieve his goals (faith, football and family), then why engage? This shows a focus and determination to protect his peace. It shows a quarterback squarely focused on what he wants in life.

Don’t be distracted by criticism. Remember, the only taste of success some people have is when they take a bite out of you.

The fact Carr took the time to explain this to his fans and detractors alike shows a focus you want if he’s at the helm of your beloved Raiders squad. It’s admirable and those who find the negatives in his position, or use it as “proof” that Carr is weak, really don’t matter. By eliminating the negative interactions in social media, and the willingness to explain himself candidly, he’s the opposite of weak. 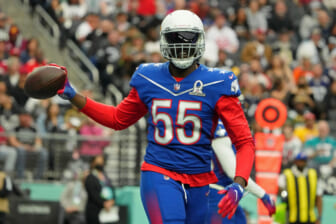 Whether you’re a fan or not, Carr focuses on his job and life.

In a world where others use digital platforms to do much harm, it’s refreshing Carr has his boundaries and he’s willing to share them.