The Las Vegas Raiders have been getting a bargain with Derek Carr as their quarterback for seven seasons, and it’s time he earned more respect from the Silver and Black.

With Carr under center, Jon Gruden and the Raiders can indeed win a Super Bowl. Let’s take a look at several key tasks Carr can accomplish to help Las Vegas reach its ultimate objective of throwing a championship parade in Sin City.

A persistent narrative coming out of Vegas is this “will-they-or-won’t-they?” relationship between head coach and quarterback.

Jon Gruden is notorious for having a wandering eye when it comes to quarterbacks, always looking for the next big thing. Even when Chucky compliments Carr to the general public, there’s a sense he’s not fully supportive.

Outsiders doubt Carr’s leadership ability, but maybe he just feels a little irked about the Raiders not committing to him as deeply as he has to them. The way to solve this is for Carr to sign a guaranteed, multi-year deal that’ll keep him in Las Vegas for the long haul. 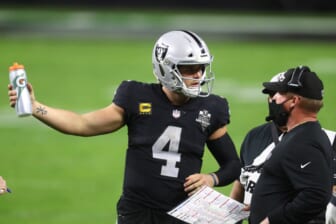 ESPN’s Jeremy Fowler reported earlier this month that the Raiders and Carr are discussing an extension, even as the QB has two years and $50 million left on his current contract. (h/t FanSided’s Bobby Thompson)

If the two sides can strike a reasonable accord that gives Carr a raise but doesn’t completely crush the team in salary cap space, any lingering suspicion about Gruden’s perpetual pursuit of a QB upgrade or Carr’s lackluster locker room presence will dissipate.

The more outside noise the Raiders can cut out, the better off they’ll be. It starts with a legitimate commitment to Carr.

Related: Read more about the Raiders and Vegas’ other major sports teams on VegasSportsToday.com

Speaking of uncertainty about star quarterbacks, reigning NFL MVP Aaron Rodgers may have already played his last down for the Green Bay Packers. Thus, his No. 1 wide receiver, Davante Adams, could be looking for a new team once his contract expires after this season.

Carr has publicly professed his desire to reunite with his former favorite target at Fresno State in a podcast interview with Cris Collinsworth, per ProFootballTalk.com’s Michael David Smith:

Davante […] I’m gonna offer him whatever I gotta offer. I’ll buy him a car, whatever I’ve got to do I’ll offer that man. I know he would fit in great with the receivers we have here. He would fit so well in that room. […] He’s my best friend, I think he’s one of the best — he’s the best receiver in the NFL.

While the debate for the NFL’s top receiver is alive and well with several viable contenders, Adams is certainly among the position’s elite. He had 115 receptions, 1,374 yards and 18 touchdowns in 2020.

It’d cost a lot for Las Vegas to bring in a playmaker of Adams’ caliber, and considering the holes the Raiders have on defense, maybe they’d balk at the chance to sign him. 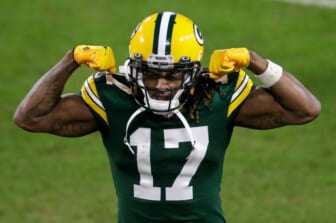 That said, you can’t put a price on the innate chemistry and friendship Carr and Adams have. They’ve both endured adversity at the NFL level and have developed into fantastic players in their own ways.

If 2020 first-round pick Henry Ruggs III winds up hitting, and Las Vegas gets Adams to join a pass-catching group led by superstar tight end Darren Waller, the Raiders would be nearly impossible to stop. Just some food for thought.

So yeah, maybe this sounds misguided, or like Carr having undue influence on how the Raiders build the roster is a recipe for disaster.

Pray tell, though: How has Las Vegas been doing personnel-wise without Carr’s input? Gruden has final say on personnel, and is rumored to be extremely impulsive when it comes to the transaction wire.

That’s not a recipe for sustainable, long-term success. The Raiders’ collective inability to build a competent defense has cost them at least two years of Carr’s prime. Their already unimpressive defense from 2019 took a step back last year, finishing third-worst in points allowed at 29.9 per game.

Nevertheless, Carr finished as Pro Football Focus’ No. 10-graded QB after finishing 11th the previous season. That’s more than good enough to make a run in the playoffs with even a slightly above-average defense. 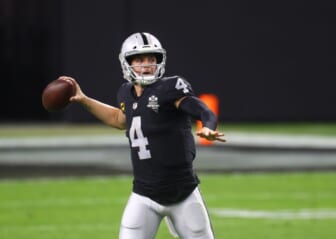 Anyone who thinks Carr just dinks and dunks his way down the field and benefits from Gruden’s scheme will be disappointed to learn that Next Gen Stats graded him as the No. 2 deep passer in the NFL in 2020.

If Carr keeps playing like that — or even steadily improving as he has — and successfully brings Adams to Las Vegas, he should take notes from the GOAT himself, Tom Brady, pound the table for certain players, and get the Raiders to sign them.

Whatever recommendations Carr makes can’t be worse than what Gruden and the Raiders front office have assembled on defense over the past several years. Gruden is old-school and stubborn, but needs to embrace the new era of QB empowerment, which will only reinforce Carr’s confidence as the face of the franchise.

Derek Carr gets a bad rap, but has the chops to win a Super Bowl

Obviously, the recruitment of Davante Adams is a full year out, and it’ll take at least an additional season for Las Vegas’ defense to make the type of jump necessary to contend for a championship.

That said, there’s a clear path for Carr to set the stage for a big push forward in 2022. 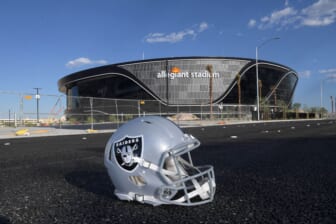 Getting a contract extension knocked out, keeping the phone lines open with Adams, handling business on the field — frustrating as it might be to be in shootouts ever Sunday — and being more collaborative with Gruden when it comes to roster decisions can all culminate in Carr being a folk hero in Raiders lore.

The question is, will Las Vegas empower Carr enough to take the organization to epic heights, and the peak of pro football itself? Guess we’ll find out soon enough.