One year after leading Las Vegas Raiders to playoffs, Derek Carr says team needs to learn how to win 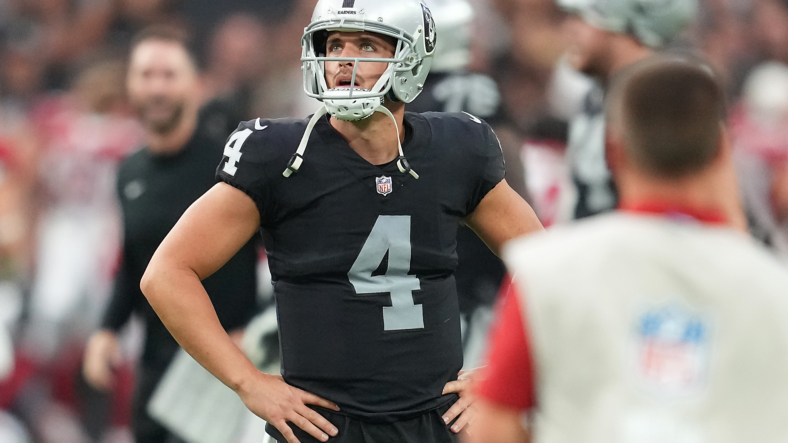 Starting the offseason with a clean slate after Jon Gruden’s resignation and letting Rich Bisaccia go so they could hire Josh McDaniels, the Las Vegas Raiders spent $440 million upgrading their team around Derek Carr this past offseason.

So how come a team that went 10-7, reaching the playoffs in 2021 has started 2022 going 0-2? Where did all that money go, and why isn’t the offense they producing at an elite level after adding Davante Adams? After racking up a quick 210 yards and two touchdowns in the first half, Carr managed just 41 more passing yards for the rest of the day.

According to the team’s starting quarterback, the Raiders need to learn how to win under their new regime.

Credit Carr, a nine-year-pro, for taking ownership and stressing his need to improve instead of pointing the blame on others. Because at the end of the day, the three-time Pro Bowl QB is right.

Look at how they lost in Week 2. It wasn’t that Carr was bad. It’s just that his opponent’s QB, Kyler Murray, was really good late in the game. It obviously also didn’t help that the Raiders were gassed at the end of the game once overtime hit. Maybe it was simply fatigue after a long day, yet from multiple fumbles to dropped passes, the Raiders have a lot they need to clean up.

If the Raiders need to learn how to win, they better do so quickly. Sure, their first two opponents of the season were always going to be a tough beat. The Los Angeles Chargers not only are division foes, but they boast Justin Herbert and one of the most-improved rosters from a year ago.

Plus, the Arizona Cardinals reached the postseason in 2021, and Kyler Murray had to hear about his inefficiencies all offseason as the team negotiated his new five-year, $230 million contract. If you didn’t think Murray would be motivated this season, you’d be wrong.

An 0-2 start is never ideal, and the only way to get the bad taste out of their mouths is by winning their next game, and hopefully the next one, to get back to .500. Yet, as usual, that’s always easier said than done.

Two of the Raiders’ next three opponents are playoff teams from a year ago, and the third are the new-look Denver Broncos led by Russell Wilson, who have been battling some of their own demons early on.

Winning two of their next three games is a must. Starting off 1-4 just might be digging a pit that’s too deep to crawl out of in the AFC West, but 2-3? That’s manageable.