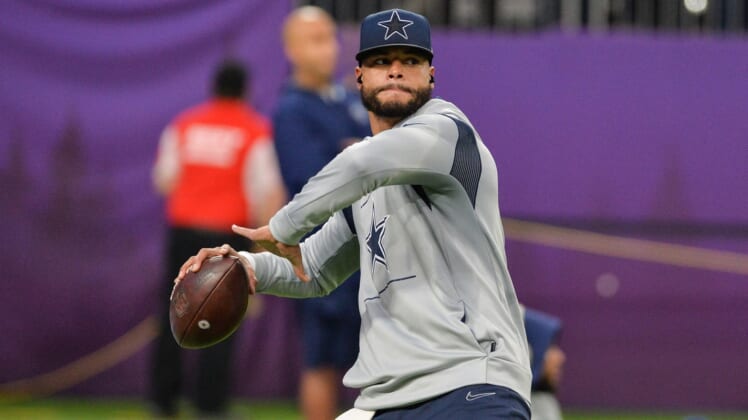 Dak Prescott wanted to play Sunday at Minnesota, but the Dallas Cowboys were not yet giving their quarterback clearance to return from a strained calf.

He does have a chance to return for Week 9, when the Denver Broncos visit, if he makes daily improvement in practice participation from Wednesday to Friday.

Prescott will practice on a limited basis Wednesday and be cleared for full participation Thursday if cleared by medical staff, head coach Mike McCarthy said Wednesday.

“He has a certain number of reps to take, and we’ll reevaluate (Thursday) morning,” McCarthy said.

Prescott was injured on the final play of the Cowboys’ win at New England in Week 6, followed by a bye week.

McCarthy said resting his No. 1 quarterback last week was done with consideration to the two full months of the regular season left to be played.

Cooper Rush won his first career start last Sunday. He guided the Cowboys to a 20-16 victory against the Vikings with a touchdown pass to Amari Cooper in the final minute.

Rush completed 24 of 40 passes for 325 yards, two touchdowns and one interception.

Prescott, 28, has thrown for 1,813 yards, with 16 touchdowns and just four interceptions through six games this season.