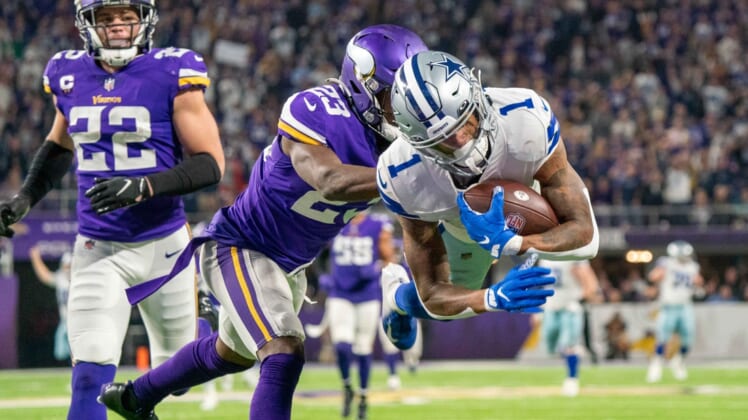 Cooper Rush capped his first career start with a 5-yard touchdown pass to Amari Cooper with 51 seconds left, as the Dallas Cowboys recorded a 20-16 victory over the Minnesota Vikings on Sunday night at Minneapolis.

Rush started in place of an injured Dak Prescott and completed 24 of 40 passes for 325 yards, two touchdowns and one interception. The 27-year-old had thrown three career passes, all in 2017, entering the contest before leading Dallas (6-1) to its sixth straight victory.

Prescott tested his strained right calf prior to the game before it was determined he wasn’t physically fit to play.

Greg Joseph kicked a 24-yard field goal with 2:51 remaining to give the Vikings a 16-13 lead. The drive was aided by three key Dallas penalties — Tarell Basham was flagged for roughing the passer and Randy Gregory was called for two personal fouls.

Rush then drove the Cowboys 75 yards on eight plays on the decisive drive. A key play was a 15-yard completion to Ezekiel Elliot on third-and-11 from the Minnesota 20-yard line with the touchdown throw to Cooper coming on the next play

Xavier Woods forced two turnovers for the Vikings. He intercepted Rush in the second quarter and delivered a strip-sack in the fourth quarter in which teammate Anthony Barr recovered the fumble.

Cooper had eight receptions for 122 yards and CeeDee Lamb added six catches for 112 yards for Dallas. Cedrick Wilson caught three passes for 84 yards and one touchdown and also had a key 35-yard completion for the Cowboys, who outgained the Vikings 419 to 278.

Rush threw his first career touchdown pass on the third play of the second half. He hit Wilson in stride at midfield, and the receiver did the rest to complete the 73-yard scoring play and knot the score at 10.

Joseph’s 40-yard field goal gave the Vikings a 13-10 lead with 6:31 left in the quarter, before Greg Zuerlein kicked a 39-yard field goal with four seconds left to tie it. The Dallas field goal was set up by Wilson’s 35-yard flanker pass to Lamb.

The Vikings struck first when Cousins tossed a 20-yard touchdown pass to Thielen with 11:49 left in the first quarter.