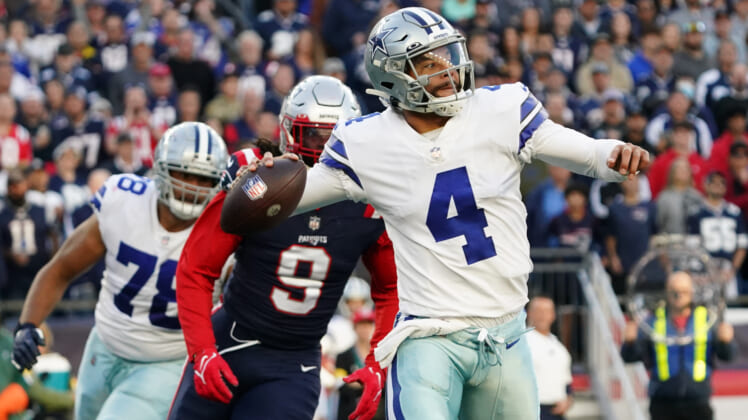 Talk about a hell of a performance from Dallas Cowboys quarterback Dak Prescott Sunday against the New England Patriots.

In a game that saw multiple lead changes late in the fourth quarter, it ended up going to overtime tied at 29. The last few minutes of regulation included a pick-six of Mac Jones from Cowboys cornerback Trevon Diggs followed by a 75-yard touchdown pass from Jones to Kendrick Bourne with Diggs himself in coverage. It’s a thing that actually happened.

After New England failed to score on the first possession of overtime, Dallas took over at its own 20-yard line.

Dak Prescott proceeded to lead the Cowboys down the field 80 yards on seven plays, including a walk-off touchdown pass to CeeDee Lamb that accounted for the final 35 yards. It was insanity at Gillette Stadium in New England.

First off, what an absolutely brilliant play call from Cowboys offensive coordinator Kellen Moore. Faking a run left to running back Ezekiel Elliott on first down and going with the misdirection. New England had absolutely no answer for it. It’s very rare to see a Bill Belichick-led defense fooled like that.

Secondly, the execution was absolutely perfect from Dak Prescott and Co.

By virtue of this walk-off win in a mistake-filled game for the Cowboys, they move to 5-1 and have won five consecutive since a narrow Week 1 loss to the defending champion Tampa Bay Buccaneers.

As for Prescott, he finished the evening having completed 36-of-51 passes for 445 yards with three touchdowns and one interception.