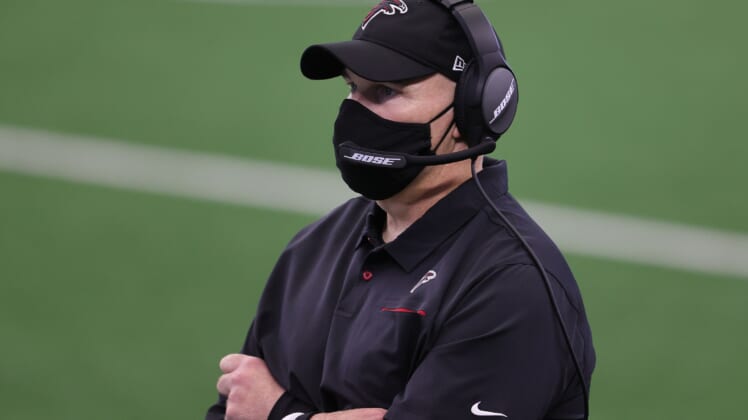 We haven’t even seen player personnel moves take place around the NFL as most teams start their offseason. That has not stopped Dallas Cowboys rumors from suggesting that dramatic changes could be in the cards following a disastrous 2020 season for the team.

Dallas just recently fired defensive coordinator Mike Nolan after one season. Cowboys rumors had previously included the possibility that former Atlanta Falcons head coach Dan Quinn could replace him in that role. We now have confirmation.

“The Cowboys have agreed to a deal in principle to make Dan Quinn their defensive coordinator,” NFL Media’s Tom Pelissero reported Monday.

This is some rather interesting stuff in that Quinn seems to be a major upgrade from Nolan, who McCarthy hand-picked to be his defensive coordinator due to their past connections with the San Francisco 49ers.

These two do not have a built-in relationship. Quinn departed San Francisco one year before McCarthy became the team’s offensive coordinator back in 2005. Cowboys rumors throughout pretty much the entire 2020 season were that they’d move on from Nolan. For good reason.

He’s proven to be a failure in this role more often than not in the recent past. As it relates to Nolan’s one-year tenure in Dallas, his defense yielded 29.6 points per game and ranked in the bottom 10 in yards allowed.

Quinn, 50, was fired by the Atlanta Falcons five games into the 2020 season after posting a combined 43-42 record as their head coach. That included a trip to the Super Bowl following the 2016 season.

A respected defensive mind, Quinn led the Seahawks’ legendary “Legion of Boom” unit to top-ranked finishes in 2013 and 2014 before taking the Falcons’ head coach job. There was some talk about him returning to his 49ers roots if defensive coordinator Robert Saleh found a head coach job. That can now be thrown out the window.

Prior to his stint in Seattle, Dan Quinn served as an assistant with the Jets, Dolphins and above-mentioned 49ers. He has the respect of defensive players around the league.

With that said, the Quinn-led Falcons defenses of the past four seasons each finished in the bottom half of the NFL in yards allowed. That’s a far cry from his days in the Pacific Northwest.

Owner Jerry Jones and Co. made it clear throughout the 2020 season that Mike McCarthy would not be one-and-done in Big D. With that said, the decision to move on from Mike Nolan and replace him with Dan Quinn could tell us a story here.

As noted above, McCarthy does not have a built-in relationship with Quinn. Could this have been a move made from the higher-ups in Dallas? That seems like a more than reasonable suggestion. Whether it pays off remains to be seen.

It’s now going to be up to McCarthy and his staff to improve off a six-win 2020 season. If that does not happen, a usually patient Jerry Jones might not have a choice other than to move on from the head coach. Adding someone of Quinn’s ilk to the coaching staff brings this point to light even more.