Cooper Kupp lists his top-five wide receivers, but not himself 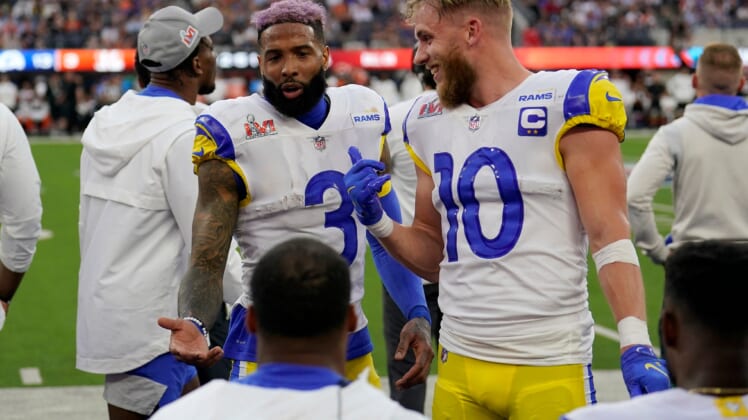 Los Angeles Rams wide receiver Cooper Kupp is coming off a better season than any other pass-catcher in the NFL based on the 2021 season. His effort, not only in the regular season but also in the playoffs, helped the Rams win Super Bowl LVI, where he won the MVP award thanks to a 92-yard, 2 TD catch performance.

During the regular season, Kupp had more receptions, more receiving yards, and more touchdown catches than any other NFL player. These accomplishments won Kupp the ‘receiving Triple Crown’ for leading the league in all three major categories. A feat that hasn’t been done since 2005, when Steve Smith did so with the Carolina Panthers.

Any way you look at it, Kupp had a phenomenal season. But even the player himself doesn’t feel he’s worthy of being named the best receiver in football. He has his own list of top-five WRs, and one of the names might surprise you.

Kupp appeared on the ‘I Am Athlete‘ podcast and revealed his list of the best NFL receivers currently in the game.

Ranking the top receivers in football is a difficult task these days. There truly isn’t one player who dominates in all facets. There are many who have different skill sets, bringing something unique to the table.

Yet if there is one name commonly atop WR rankings, it’s Davante Adams, who’s been a first-team All-Pro each of the past two seasons with the Green Bay Packers. But a couple of newcomers in Justin Jefferson and Ja’Marr Chase have opened eyes with their ability to make an immediate impact.

While Adams has the respect now, an argument could also be made for Jefferson or Chase to take the crown with another strong season in 2022.

Oh, and Odell Beckham Jr.? That’s an interesting name to include. Sure, they were teammates for 12 games during their Lombardi season, and he certainly was once worthy of being a top-five, if not the best receiver. But he’s lost that status after toiling in Cleveland for two and a half seasons. Still a free agent, OBJ is likely to draw plenty of interest once he’s recovered from offseason ACL surgery, though Kupp says they’re still working on bringing him back to the Rams.

So Justin Jefferson is or isn’t better than Cooper Kupp?

Well now Kupp has me confused. Justin Jefferson recently declared himself to be better than Kupp, while noting his respect for the Rams receiver.

The reigning Super Bowl winner didn’t quite agree with Jefferson’s take when asked which receiver was better.

Though Kupp didn’t bash Jefferson’s opinion. He thinks it’s wise to remain confident in one’s abilities, as Jefferson is. But I still don’t understand.

Kupp listed his top-five receivers, and he placed Jefferson No. 2. Later, when asked, Kupp now says he’s better than Jefferson by disagreeing. Which is it?

Maybe Kupp was trying to use his top-five ranking to try and stay humble or avoid sounding cocky. Who knows. The argument for the top receiver will continue raging on. Maybe this season can help provide clarity instead of more confusion.