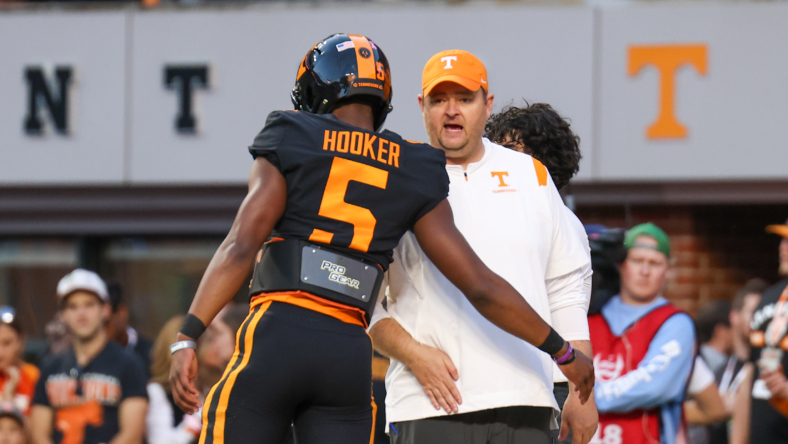 Who is the best team in college football? Week 9 of the 2022 season made that more complicated with several upsets and some shaky performances providing plenty of movement in the top 25 rankings for Week 10.

The slate started early with both the Utah Utes and NC State Wolfpack surviving their matchups on Thursday night with backup quarterbacks under center. As for Saturday, the Ohio State Buckeyes rallied to take down Penn State and the TCU Horned Frogs escaped out of West Virginia with a victory.

Things got a bit wild after that. A pair of prominent teams in the AP top 25 rankings lost blowouts, defeats that raise significant questions about just how legitimate their resumes were. Meanwhile, the Syracuse Orange turned a 6-0 start into consecutive losses. Of course, there was plenty of other action that influences how we view the best teams in college football.

There’s a case to be made for several teams being worth of the No. 25 spot in our rankings. Mississippi State, Florida State, Washington and Maryland each have fairly compelling records. However, Baylor entered Saturday ranked 17th in ESPN FPI and beating Texas Tech at Jones AT&T Stadium only strengthened the Bears’ resume.

The Texas Longhorns return to the college football rankings following a Saturday that saw a number of teams fall out. It’s really betting on the talent in Texas, with quarterback Quinn Ewers and running back Bijan Robinson more than capable of taking over a game. They are the players to watch on Nov. 5 against a Kansas State team that just crushed Oklahoma State.

The Oregon State Beavers are just one game shy of matching their highest win total (seven) since 2013. It’s really been a collective effort this season, with Chance Nolan (939 pass yards, 7 YDs) and Ben Gulbranson (818 yards, 5 TDs) each stepping up at different times. No one is calling Oregon State one of the best college football teams in 2022, but it’s got a chance at a 9-2 record heading into the Civil War vs Oregon on Nov. 26. 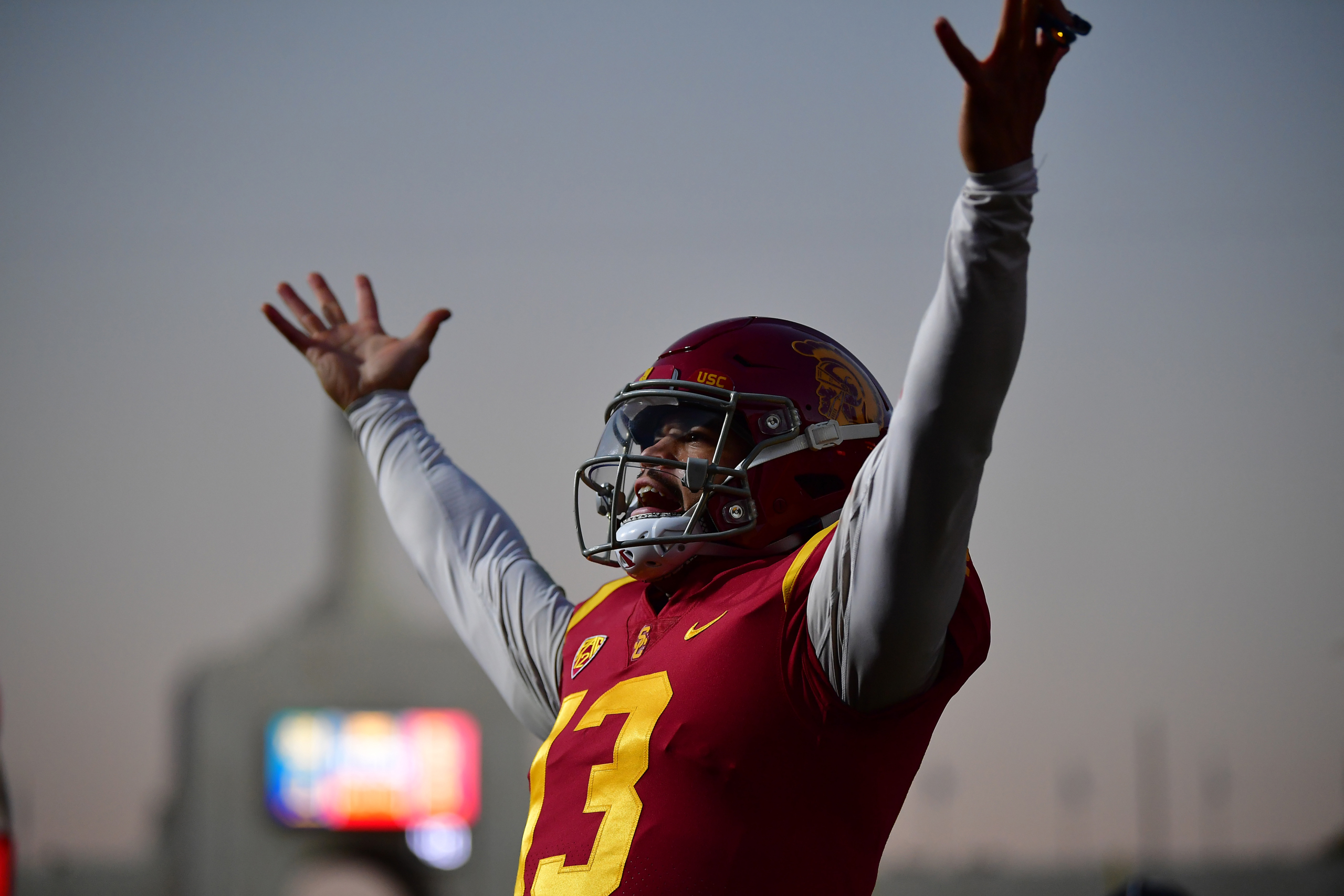 A bye week for the Liberty Flames brought a contract extension for Hugh Freeze. Coming off an 8-5 season, Liberty is on pace to match its success from the 2020 season (10-1). Kept out of the AP top 25 rankings, a one-point loss to the Demon Deacons is a quality ‘blemish’ on the Flames’ resume. With a victory in Week 10 at Arkansas, Liberty would get the recognition it might already deserve.

It’s been a season to remember for the Tulane Green Wave. Under head coach Willie Fritz, an emerging Power 5 coaching candidate, the Green Wave is riding its way through the conference (4-0). While there is a loss that stains the record, victories over Kansas State and Memphis prove Tulane is for real. If this keeps up, this will be the program’s best season since 1998 (12-0).

The best freshman in college football added to his unbelievable season on Saturday night. On the national stage against Pittsburgh, Tar Heels’ quarterback Drake Maye carbed up the Panthers’ secondary and led North Carolina in rushing. Maye makes the Tar Heels appointment viewing and he should slice up Virginia next Saturday on the ACC Network.

Not what anyone expected from Sam Hartman and the Demon Deacons. A favorite on the road, Wake Forest got knocked to the ground and never came close to getting up after that 35-point Cardinals’ fourth quarter. We’d still pick this team to beat NC State, but whoever loses will disappear from the Week 11 college football rankings.

Bret Bielema has officially turned the Fighting Illini around. Taking over this program after a two-win season, Illinois went 5-7 in 2021. Following its decisive road victory over Nebraska, the Illini now have as many wins in the first two months of the season as they did in 2020-’21 combined. Illinois should have little trouble against the Spartans next Saturday.

The woes against top-10 teams in the college football rankings roll on for James Franklin and the Penn State Nittany Lions. Turnovers (four) have everything to do with Saturday’s loss. Ohio State turned three of them into 21 points, including a pick-six that sealed it. The Nittany Lions will almost certainly finish with a 10-2 record, but they lost the games that matter to the fan base. 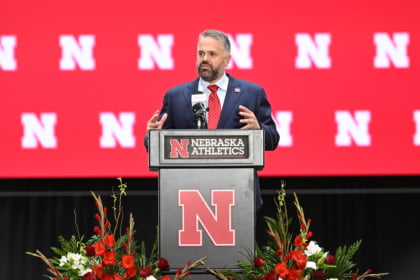 There is getting bead and then there’s what happened to Oklahoma State in Week . After getting into two physical games with TCU and Texas, the Cowboys came out flat and Kansas State ran all over them. It was over before the third quarter and now Oklahoma State can only hope it earns a spot in a quality bowl game.

The Ole Miss Rebels showed some toughness and physicality on Saturday, along with the ability to overcome a rough first-half performance on the road. After trailing 14-10 at halftime, Jaxson Dart delivered two third-quarter touchdowns that provided Ole Miss with a cushion and allowed them to run out the clock. It’s a nice step forward after the loss, but this is not a team we would trust in Week 11 against Alabama.

Jayden Daniels and the LSU Tigers certainly wish they could have taken the momentum from the victory over Ole Miss immediately into the Alabama game. While they missed out on that, Daniels (762 offensive yards, 11 touchdowns) should feel plenty confident after destroying the Rebels and Florida Gators. Tennessee proved there are vulnerabilities in the Crimson Tide’s secondary and if LSU’s offensive line buys time, Daniels could exploit enough holes to deliver a victory to the raucous crowd next Saturday night.

Whoah, Nelly. An old-fashioned beatdown by the Wildcats on Saturday afternoon. With Adrian Martinez still limited, running back Deuce Vaughn provided the early spark and quarterback Will Howard piled on in a statement win. Up next, a tough battle for Kansas State’s defense against Quinn Ewers and Bijan Robinson.

If you told us before Week 9 that the Utes Utes would be without quarterback Cameron Rising and their top running backs, we wouldn’t have picked them to beat Washington State. Credit to head coach Kyle Whittingham, sophomore quarterback Bryson Barnes and freshman running back Jaylon Glover for delivering on a short week. Utah should win its next two games (Arizona, Stanford), setting the stage for a great battle at Autzen Stadium on Nov. 19.

The dream of a perfect season are gone for the UCLA Bruins, but it always seemed unrealistic. However, Dorian Thompson-Robinson still looks more than comfortable carrying this team in big games and there are quite a few remaining. As long as this offense maintains its consistency, UCLA could go into its No.v 19 matchup with USC as a top-10 team in the AP college football rankings.

The USC Trojans defense is still a massive concern, one that keeps it far away from the playoff picture right now. Granted, Caleb Williams id doing everything humanly possible to change minds and he makes a strong case as one of the most exciting players in college football. Fortunately for Lincoln Riley, USC”s bad defense won’t be a concern vs Cal and Colorado. 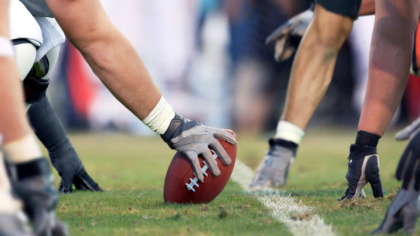 Also Read:
How to Watch College Football Live Without Cable (2022)

The Oregon Ducks didn’t come out of Saturday’s game feeling quite as good as last week. While beating Cal by two scores helps the Ducks maintain their place in the top 25 rankings, Bo Nix’s Heisman campaign took a hit. Fortunately, he can spark some life into it in Week 10 against a decimated Colorado Buffaloes program.

A win that certainly felt too close for comfort. The TCU Horned Frogs needed a fourth-quarter rally, turning a 31-24 deficit into a 41-31 and escaping out of West Virginia. Let’s hope this served as the wake-up call for TCU because they must execute far more consistently in November to win.

D.J. Uiagalelei returns from the bye week as the Clemson Tigers starting quarterback. Dabo Swinney hopes some time to rest and study the film gets his veteran signal-caller out of the funk that nearly wiped out Clemson’s perfect record. As long as Uiagalelei avoids critical mistakes, the Tigers should win a close one on the road against Notre Dame.

Things are about to get interesting in Week 10. While Alabama vs LSU isn’t the best game on the schedule, the Crimson Tide making the trip to Death Valley at night offers significant upset potential. LSU’s offense is cooking since the players-only meeting and a spread offense (Tennessee) just torched Alabama a few weeks ago. The difference might be two weeks to prepare and the quarterback advantage in the Crimson Tide’s favor. One thing is for certain, this matchup will have a huge sway on the CFB Playoff Committe.

Things looked a bit worrisome for the Michigan Wolverines early on Saturday. Blake Corum wasn’t heavily involved out of the game and Michigan State surprisingly jumped out to an early lead. Naturally, the football was put back into Corum’s hands and he carried the Wolverines to an 8-0 record. The next two games should be a breeze, but Illinois (Nov. 19) could pose far more trouble than anticipated. Of course, a win would also strengthen Michigan’s case for the CFB Playoff.

J.T. Tuimoloau is a hero for the Ohio State Buckeyes. A five-star recruit in the 2021 class, the 6-foot-4 defensive lineman took over Saturday’s game. He deflected a ball that turned into an interception, recorded two sacks and closed things out with a pick-six. Oh, C.J. Stroud also improved his stock in the Heisman Watch. It’s full steam ahead for Ohio State with the Michigan game determining who gets a College Football Playoff spot.

Related: How to Watch the Ohio State Buckeyes football games

This is the best the Georgia Bulldogs have looked since the season opener, at least in three-of-four quarters on Saturday. Stetson Bennett and Brock Bowers showde that special connection, picking Florida apart in the first half. This is exactly what you want to see before the Tennessee vs Florida game, a matchup that will determine the No. 1 team in the college football rankings.

The Tennessee Volunteers are the best team in college football right now. Against another ranked opponent, Heisman favorite Hendon Hooker dominated and Josh Heupel’s offense fired on all cylinders. There are improvements to be made defensively, but the offense looks overwhelming right now. The winner of the Tennessee vs Georgia battle will almost certainly earn the No. 1 spot in the CFP rankings.