Chicago Bulls have interest in Matisse Thybulle trade this offseason; How it could work 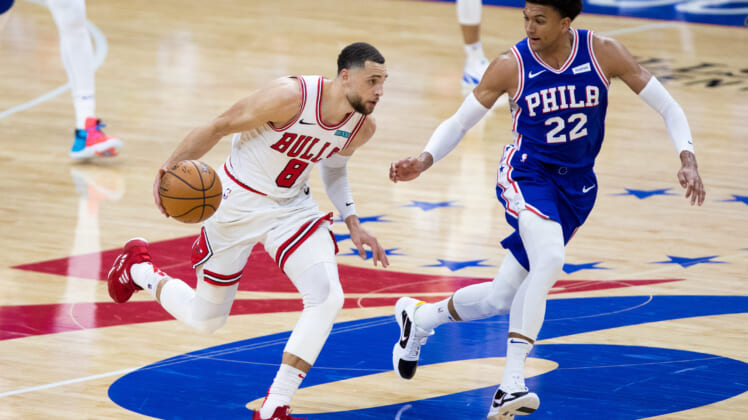 Looking to push past their First Round playoff elimination, the Chicago Bulls are heading into the offseason with a strong desire to add even more talent. Zach LaVine’s pending free agency decision will likely be the biggest factor that shapes their summer, but the Bulls also have their eye on trading for Matisse Thybulle from the Philadelphia 76ers according to Sean Deveney.

Here’s how a potential trade could work.

Bulls’ defense would take a leap with Matisse Thybulle trade

If the Bulls are intent on adding a top wing defender, Matisse Thybulle would certainly fit that mold. Just being named to the NBA All-Defensive second-team, Thybulle has averaged over two steals/blocks per game since entering the league as the 20th pick in the 2019 NBA Draft.

He’s not one who needs the ball in his hands to be successful, making him a perfect fit in Chicago along their many skilled offensive weapons. While his offensive game remains raw, it’s his defensive prowess that gets Thybulle 25.5 minutes per game on what was the fourth-seeded team in the Eastern Conference.

There’s no doubt he’d retain a similar role in Chicago as he enjoys now, as a tenacious defender on the wing who isn’t afraid to mix it up in the paint. At 6-foot-5, 210 pounds, Thybulle injects a versatile disruptor who can guard multiple positions, restricting an opponent’s best scorer on a nightly basis. He’d be a strong addition to the Bulls. Depending on the cost.

While Thybulle is certainly valued highly by the 76ers, he might be attainable for the right price. Entering his fourth season as a pro, his contract won’t be the issue to getting a deal done, but now that he’s eligible for an extension, the Bulls will likely work quickly to get a new contract written up if a trade can be completed.

As far as the actual trade compensation headed to Philly, the Bulls have several options this offseason.

It’s possible sending the 18th pick in the 2022 NBA Draft is enough to entice the Sixers, depending on their mentality heading into the offseason. Doing so clears cap space off their books, kicking the can down the line instead of ponying up extra cash for Thybulle in the near future.

Getting the Bulls’ selection also adds more youth to a Sixers roster after sending out future picks to acquire James Harden just ahead of the NBA trade deadline last season. Or maybe the 76ers are simply looking for the flexibility to make another deal.

Otherwise if it’s proven or rising talent the Sixers seek, a package built around Ayo Dosunmu could get conversations started. The 22-year-old Chicago native likely wouldn’t be thrilled with a trade out of his home state, but the 76ers might covet his ability to shoot threes with a high efficiency (.376% as a rookie in 2021-22).

Lastly, if the Sixers are intrigued with the seventh pick from the 2019 Draft, Coby White’s $7.4M salary would work in a trade for Thybulle, but his contract would actually add more to their books for the 2022-23 season.

Who knows how available Thybulle truly may be this offseason, but if he’s on the trade block, expect the Bulls to get involved. By all appearances, they have the trade capital to at least be involved in negotiations.