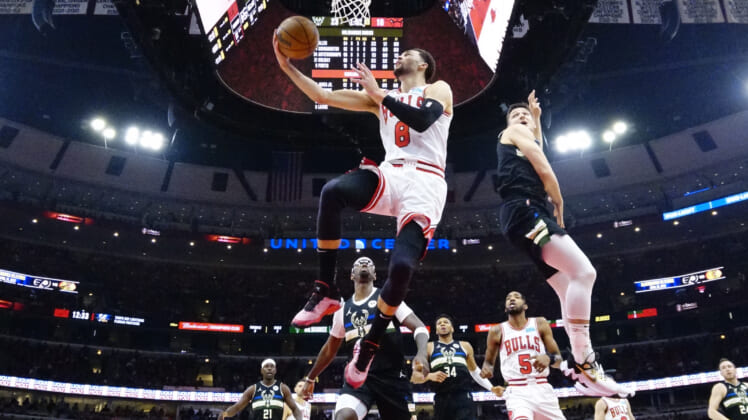 Months before the offseason arrived, everyone assumed Zach LaVine would re-sign with the Chicago Bulls. On the verge of becoming one of the top NBA free agents this summer, a return to Chicago now appears less likely.

The 27-year-old NBA star is hitting the open market at an ideal time. With James Harden and Kyrie Irving likely re-signing with their teams, LaVine becomes the best player available this summer. There will be plenty of demand for his services, opening the door for a lucrative multi-year contract,

However, it’s no longer a foregone conclusion that LaVine rejoins the Bulls. Chicago will be involved in the bidding warm but it seems there is now a real possibility they don’t win it.

NBC Sports’ K.C. Johnson spoke to multiple NBA executives, coming away with the impression that LaVine returning to Chicago is “no longer considered the slam dunk” many believed months prior.

It’s tied to a sense from teams around the league that the Bulls’ front office might not be willing to offer the max contract worth more than $210 million over five years.

An All-Star selection in each of the past two seasons, LaVine made it clear over the past year that he isn’t interested in taking a discount. While playing for the Bulls might offer him the best opportunity to compete in the NBA playoffs, the UCLA alum is prioritizing his future and providing for his family.

Given the increasing hope around the NBA that LaVine can be pulled away from Chicago, there should be plenty of rumors about his free-agent pursuit in the weeks ahead. As for which teams will pursue him Johnson notes the Portland Trail Blazers, Los Angeles Lakers, Dallas Mavericks and Atlanta Hawks are already being linked to LaVine.