Best UFC Fighters of All Time: Who is the Octagon GOAT?

A ranking of the best UFC fighters of all time can be a difficult task. There have been so many amazing talents that have competed in the Octagon with a variety of successes that make them legends in very different ways. Nevertheless, Sportsnaut did the work and looked into the details of the greatest competitors to ever compete in the promotion.

In all its glory, here are the 20 best UFC fighters of all time.

Royce Gracie is the Babe Ruth of MMA. He put the sport and the UFC on the map, as well as introduced the majesty of Brazilian Jiu-Jitsu to the masses. He was the tournament winner from UFC 1 to UFC 3 and remained unbeaten over the first five events. He is an absolute cage fighting legend and the organization would not exist today if not for his early excellence.

Randy “The Natural” Couture was the first fighter in the UFC to truly defy father time at an elite level. He is the oldest fighter ever to win the UFC heavyweight title and was no spring chicken when he held the light heavyweight title a couple of years before that. He was an ageless wonder that showed the offensive value in clinch fighting and half guard on the mat.

Junior dos Santos was one of the greatest strikers to ever compete in the organization’s heavyweight division. During his 12-year Hall-of-Fame caliber run — where he was a UFC heavyweight rankings mainstay– he beat three former division champions. Also, his first title fight with Cain Velasquez in the UFC’s network television debut gave the industry another important jump forward in popularity.

Chuck Liddell is a true icon of the UFC and was one of the promotion’s earliest mainstream stars. He was the perfect marketing foil to the promotion’s other top star Tito Ortiz and was the first UFC talent that had a similar aura to boxing legend Mike Tyson. At his peak, the former light heavyweight champion was one of the scariest fighters on earth.

Until Stipe Miocic built his legendary resume, Cain Velasquez was the greatest heavyweight fighter of all time. His ability to bring elite cardio and wrestling at that size to the Octagon was like kryptonite for many of his opponents. Velasquez was the man who brought an end to the Brock Lesnar era and showed that great heavyweights can also be pound-for-pound athletes.

Jose Aldo is one of the greatest featherweight fighters in MMA history. At his best, he was the perfect mix of speed, power, and explosivity. He beat all of the elite 145-pounders of his era and was one of the earliest dominant champions in the weight class. Even now at 35-years-old, he is still a high-level fighter, and in a different weight class.

Henry Cejudo is one of the great “what if” stories in UFC history. At the height of his powers, he walked away from the sport as a reigning and defending two-division champion at bantamweight and flyweight. Despite only 12 fights in the promotion, he left an everlasting mark in being the organization’s first former Olympic gold medalist, and one of the most talented athletes the industry has ever seen. 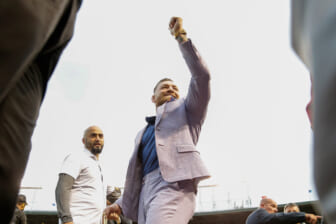 Also Read:
The ‘Notorious’ truth: Is Conor McGregor the greatest UFC fighter ever?

Hate him or love him, Conor McGregor is as important to the UFC and MMA as Royce Gracie. The Irishman’s place in taking the sport to new heights is undeniable and will reverberate for another decade. However, he does not get enough credit as one of the most destructive featherweight forces of all time. Plus, he has victories over the other two greatest 145-pounders ever and was the first man two ever hold two division titles at once.

Max “Blessed” Holloway is arguably the greatest featherweight in UFC history. His blend of elite boxing and a chin not of this world was key in him being in some of the best UFC fights in history. From 2014 and on, he beat every other great featherweight of the era not named Alexander Volkanovsky, and often decisively. He also took the mantle of the legendary BJ Penn as the best MMA fighter ever out of Hawaii.

Simply put, Amanda Nunes is the greatest female fighter of all time — in any combat sport. During her nine-year run in the organization, she defeated six former UFC champions and twice beat the next best female competitor ever Valentina Shevchenko. Furthermore, she is the only woman in promotion history to hold titles in two divisions simultaneously.

Related: UFC predictions for the Octagon card this Saturday night

Alexander Volkanovski’s UFC journey is far from over but he has done amazing things thus far. He holds two wins over Max Holloway and another over Jose Aldo. In 10 UFC appearances, he has yet to lose and is currently one of the three best pound-for-pound UFC fighters on Earth.

A case could be made that Daniel Cormier is a top-five fighter in two different divisions. During his seven years competing in the Octagon, there were only two fighters better than him at light heavyweight and heavyweight. Both men are on this list and both are the greatest ever in those respective divisions. “DC” was also the first UFC fighter two defend championship belts in two different weight classes.

Over his first 11 fights in the UFC as a middleweight, Israel Adesanya has never lost. And in many of those matchups, he rarely lost a round. He is the heir apparent to Anderson Silva as the standard-bearer at 185 pounds and is already one of the best strikers in the UFC’s nearly 30-year history. Before he is done, he will rise on this list and likely be considered the greatest middleweight of all time.

Khabib Nurmagomedov is like the Rocky Marciano of the UFC. In 13 UFC fights, he never lost and finished his career unbeaten at 29-0. Like Marciano, he retired while still at his peak, and used a far from flashy workman style to dominate. He beat many of the best competitors in the UFC lightweight rankings during that time and is viewed as the best 155-pounder ever.

Demetrious Johnson is the best UFC fighter to ever compete at flyweight and that is unlikely to change in the next decade. If he had power, he would have been illegal because he could strike, wrestle, was absurdly fast, technically proficient, and had a great fight IQ. He was damn near the perfect fighter during his seven years in the UFC. 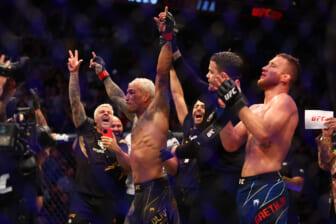 Like Demetrious Johnson, Kamaru Usman is one of the most complete fighters MMA has ever seen. What is impressive about him is that he wasn’t always like that, and evolved from a wrestle-heavy fighter to a competitor willing to stand and trade with elite strikers, and win. By the time he retires, “The Nigerian Nightmare” may end up topping this list.

Anderson Silva is maybe the greatest striker the UFC has ever seen. Not only because he was a sniper in his accuracy and had underrated power, but his defense was unbelievable. If he didn’t embarrass foes with his unreal reflexes, he had a chin that could take serious damage. He beat former champions in two divisions and like Liddell he had a Mike Tyson aura. Silva will also go down as the greatest MMA fighter from Brazil. A country with many of the best MMA competitors ever.

Georges St-Pierre is maybe the greatest pure athlete in UFC history. However, he blended that unreal athleticism with technical mastery and excellent game plans. He is the best UFC fighter to ever come out of Canada and is the greatest competitor in welterweight history. However, he added to his legend in 2017 when he returned from a four-year retirement and joined the rare group of fighters to win titles in two divisions when he won the middleweight crown.

Jon Jones is the closest thing to a create a fighter that combat sports has ever had. He is ridiculously long and tall for the light heavyweight division, and he expertly used his size to decimate opponents. Yet he was more than that because there is nothing in the Octagon he can’t do. What makes him the greatest ever is he showed his elite skills by beating nine fighters that held UFC or other major titles in the industry. His resume is the best in the organization’s history and that is why is the best UFC fighter in light heavyweight history.