The Minnesota Vikings will hit the road to kick off the 2021 NFL season and square off with the Cincinnati Bengals during Sunday’s early wave of Week 1 action. Continue reading for our full game preview and key matchups to keep an eye on.

Cincinnati Bengals vs Minnesota Vikings: What you need to know

Oh, yes. The Vikings are still rolling with Kirk Cousins. To be fair, he’s a solid, above-average starting quarterback. It just feels like there’s a ceiling for this team with him under center. Captain Kirk is also facing a Bengals secondary that’s clearly the strength of their roster at this point.

Lukewarm though the reception may be toward another year of Cousins, there’s a bit of apprehension when it comes to Joe Burrow. Cincinnati’s No. 1 overall draft pick from a year ago got crushed behind a horrid offensive line in 2020, leading to a season-ending knee injury he’s still working his way back from. 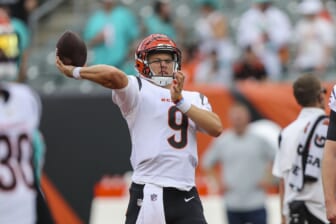 That cliche that the game of football is won and lost in the trenches? Well, it’s commonly cited for a reason. The Vikings and Bengals struggled up front on offense last year, and while many will look at Cincinnati’s revamped unit, Minnesota’s will go a longer way in deciding the outcome of this contest.

The Vikings’ zone-based rushing attack requires timing and finesse. They have a huge margin for error thanks to the greatness of elite tailback Dalvin Cook, though. What the Bengals really need is for their front seven to step up, because they were flat-out awful in 2020.

The former LSU teammates were a dynamic duo alongside Burrow on a loaded Tigers roster that won the 2019 national championship. Based on their respective trajectories, at that time, you’d be forgiven if you thought Chase would have the far better outlook going forward.

But no. In 2020, Justin Jefferson slid to 22nd overall in the NFL Draft, while Ja’Marr Chase opted out of the college football season. Jefferson set the league on fire as a rookie. Chase got drafted with the fifth pick, and by all accounts, has struggled mightily in training camp as he keeps knocking off the rust. 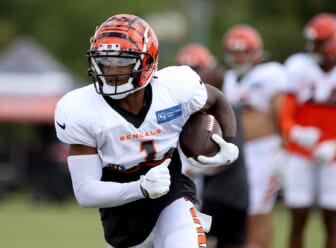 The bottom line: Vikings coach Mike Zimmer spent six years as Cincinnati’s defensive coordinator before leaving for Minnesota. The uncertainty surrounding Burrow should help Zimmer get enough stops early on Sunday to blow this game open against his ex-team. Cincinnati will score in garbage time to make the final score closer than it appears.