The Cincinnati Bengals have to be at least mildly concerned about the drop issues that have plagued rookie No. 5 overall draft pick Ja’Marr Chase throughout the preseason.

Chase spoke out about his inability to hang onto the ball and cited a variety of reasons for it, as reported by Bengals.com’s Geoff Hobson. The main culprits Chase blamed for his catching woes were a lack of concentration and — get ready for it — the lack of stripes and bigger size of an NFL ball versus a college one:

“I would just say it’s a lack of concentration. That’s all it was. If you look back at it, I jumped in the air when the ball got to me. My eyes weren’t concentrating on the ball. I didn’t keep still, so that makes my eye adjustment for the ball move around and now my eyes get lazy where the balls coming in from.

“[…] The ball is different because it is bigger. It doesn’t have the white stripes on the side so you can’t see the ball coming from the tip point so you actually have to look for the strings on the ball at the top, which is hard to see because whole ball is brown and you have the six strings that are white. But for the most part, just have to get used to it and find out what I am comfortable with catching.”

If there weren’t alarms going off around the Bengals organization and their fans, oh my, there should be by now.

This sounds like a classic case of a player completely overthinking everything, and it’s downright stunning. The hope is this is just a blip on the radar in an otherwise phenomenal NFL career for Chase, because let’s face it, Cincinnati deserves a better class of football team during the Joe Burrow era.

Based on what Chase is saying here, talking about the nuances of how a football is constructed, it seems less likely he’ll just shake off his bad streak of four consecutive dropped targets from the preseason and immediately shine when called upon in Week 1. 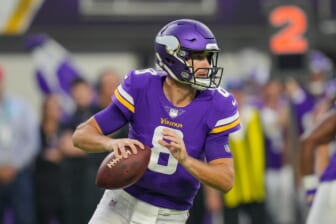 Did the Cincinnati Bengals blow it by drafting Ja’Marr Chase?

The Bengals’ insistence that Burrow constantly air it out during his 2020 rookie campaign led to him suffering a major knee injury that he’s still recovering from. Although the team did attempt to upgrade its offensive line, that remains a major weak point on Cincinnati’s roster, and Burrow is not yet fully confident on his reconstructed knee.

Despite having Tyler Boyd and Tee Higgins already in the receiving corps, the front office couldn’t resist the temptation to reunite Burrow with Chase and try to recreate the magic from their national championship run at LSU.

It’s an extraordinary situation to be able to pair two former teammates like that together. Chase was also thought to be an absolute, can’t-miss wide receiver prospect. Unfortunately, the rust he’s shown after opting out of last season is obvious, and he’s not had as much time to get on the same page with Burrow amid the QB’s recovery.

Second-round pick Jackson Carman failed to secure a starting job in training camp in converting from tackle to guard, so his contribution will be minimal unless someone gets injured.

Selecting Chase so high up made sense at the time, but you can’t help but wonder if sentiment got in the way of the Bengals potentially addressing a greater need.

Teams can easily sabotage themselves drafting based purely on need, yet when protecting Burrow is such a top priority, it’s somewhat baffling that Cincinnati didn’t go with someone like Penei Sewell or Rashawn Slater.

Again, let’s just hope Chase is No. 1 wideout everyone expected him to be coming out of college. Otherwise, the Bengals’ bid to legitimately ascend in the AFC North is going to be set back even more.