San Antonio Spurs assistant coach Becky Hammon already made NBA history once this season, becoming the first woman to act as a head coach for an NBA team. With two coaching vacancies open, Hammon has another shot at leaving her mark on the game.

Hammon filled in for Gregg Popovich on Dec. 30 after the future Hall of Fame coach was ejected from the game. The former WNBA star and long-time assistant stepped in the rest of the game, serving as the acting coach for one of the most storied franchises in the NBA.

With coaching vacancies opening up around the league and more likely to come, it seems Hammon might get an opportunity to become the first women to be a full-time NBA head coach

According to The Athletic’s Shams Charania, Hammon is scheduled to interview with the Portland Trail Blazer and Orlando Magic. While it’s unknown who is Orlando’s leading candidate, Hammon is considered to be firmly in the running to take over for Terry Stotts in Portland.

Hammon, age 44, starred as a point guard at Colorado State before entering the WNBA in 1999. She was a six-time All-Star and made the All-WNBA First Team twice. After injuries forced her to step away from the WNBA, her No. 25 was retired by the San Antonio Stars.

After her playing career ended, Hammon was hired by the Spurs as an assistant. She was only the second woman coach in NBA history and she quickly made a strong impression on the organization. She also earned the respect of many players, even being prominently talked about in an open letter by Pau Gasol about female coaches. 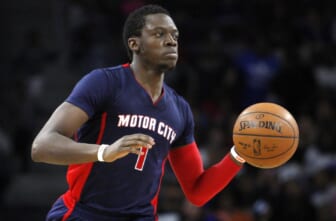 She made NBA history once again in 2015, becoming the first-ever woman head coach in the NBA Summer League. The Spurs won the title that summer and Hammon’s work and reputation led to her being part of the coaching staff at the 2016 NBA All-Star Game.

Hammon has interviewed for coaching jobs in the past. She was a leading candidate to become Colorado State’s coach in 2018. She interviewed for the Bucks’ coaching job a few months later and has received interest from multiple college and pro teams.

Chauncey Billups is currently the favorite to take over in Portland, but there is a growing buzz around Hammon. It won’t be long before Becky Hammon is hired as an NBA head coach, a day that will do down in sports history.