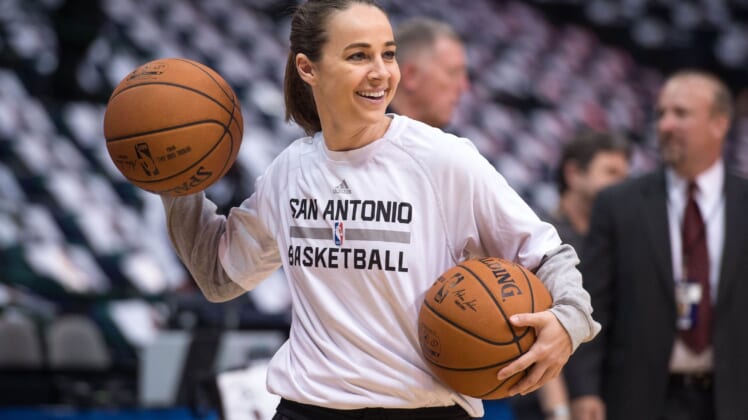 Becky Hammon has spent the last four seasons as an assistant coach for the San Antonio Spurs, and Colorado State has the former WNBA star on its radar.

According to Pete Thamel of Yahoo Sports, a source at the university said Hammon is considered one of the top candidates by the administration.

The report follows CSU athletic director Joe Parker confirming he will consider hiring a woman to coach the men’s team, per Kelly Lyell of the Coloradoan. Parker did not specifically mention Hammon but appeared to suggest she’s clearly in the running.

“I’ve thought a lot about that. It’s the most frequently asked question I get, and recommended candidate. I’m not closing the door on any thought.”

Hammon is a legend at the school, having secured three All-American honors during a prolific career. She shattered program records, and her No. 25 jersey is retired.

And Colorado State surely could use a culture change. Former coach Larry Eustachy resigned following an investigation into his conduct toward players.

Though adjusting to recruiting could be a challenge for someone who has never coached in college, Hammon undoubtedly has the basketball knowledge to run a team. She’s learned from Gregg Popovich and led a Spurs’ Summer League team to a title.

Hammon’s credentials are not a question, and her connection to CSU is obvious.

Regardless of whether she accepts the job, Colorado State would be wise to seek an interview with Hammon.