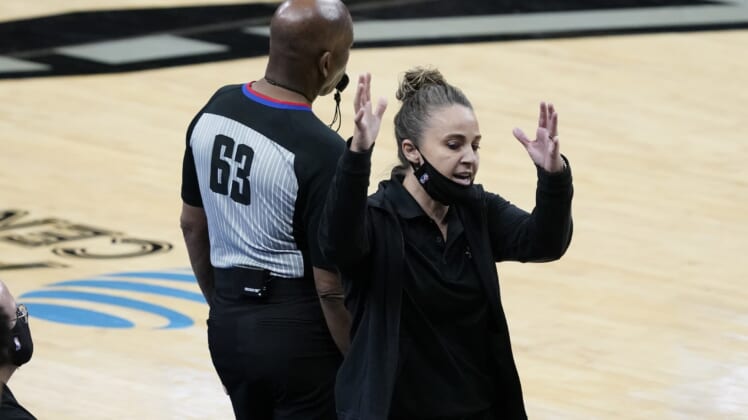 In her role with San Antonio since 2014, the 43-year-old Hammon has received interest from other teams. She’s even received interviews from multiple organizations. However, nothing has come to fruition as of yet.

That did not stop Becky Hammon from making some sports history during the San Antonio Spurs’ matchup against the defending champion Los Angeles Lakers on Wednesday evening. Longtime head coach Gregg Popovich was ejected from the game in the first half after arguing with officials.

This led to Hammon taking over as head coach while calling the shots for the Spurs, marking the first time a woman has acted as a head coach for any major North American professional sports team. That’s an actual thing in 2020.

While the San Antonio Spurs would go on to fall to the Lakers by the score of 121-107, this is in no way the story. Hammon took over for Tim Duncan as the Spurs’ top assistant when the latter resigned following the 2019-20 season. Duncan was the last Spurs assistant to be acting coach when Popovich was ejected back in November of 2019.

A year that has included Kamala Harris become the first female vice president elect will now conclude with Becky Hammon shattering the glass ceiling in the sports world. It’s something to behold. This was not lost on those watching the game Wednesday evening.

In all, the reactions to this moment did not hide from what it meant from a broader societal perspective. Obviously, a majority of the focus was on Hammon making history.

More so than any of the other major North American professional sports leagues, the NBA has done its best to foster an environment of equality and inclusion under commissioner Adam Silver.

It led to some drama during the NBA restart in Orlando last season after players protested during the national anthem and boycotted playoff games in support of the Black Lives Matter movement. With that said, the fight for quality — no matter what said fight derives from — should never be a hot-button topic.

As for Becky Hammon, those around the NBA world respect her as a basketball mind. This is not simply just about equality and inclusion. It’s about earning your stripes. She has now done that in six-plus years as an assistant with the San Antonio Spurs. That can’t go unnoticed here.

For her part, Hammon did not hide from the history-making moment following San Antonio’s loss to the Los Angeles Lakers.

The hope is that a day will come when this is not a big deal or newsworthy. The idea that inclusion and equality should be an afterthought. Even as we head into 2021, we’re not at that point right now. The past calendar year has taught us that in more ways than one.

At the very least, a year that has been trying for those around the sports world and within the broader construct of society can seemingly end on a high note.

Becky Hammon made history. She shattered the glass ceiling in an aspect of American society that had in the past existed under a machismo culture.

Now, it’s time for Becky Hammon to become a full-time head coach in the NBA. Make it happen.