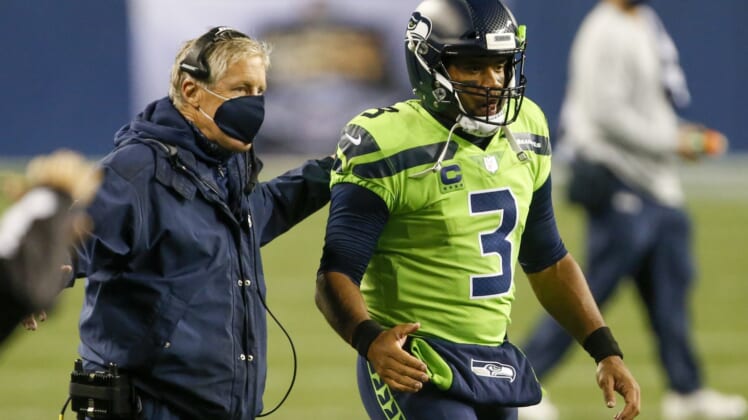 The Chicago Bears are getting desperate to find a quarterback, and to be fair, Russell Wilson isn’t the worst one to be desperate for.

Although Wilson is still on the Seattle Seahawks, he’s made it known that Chicago is one of the four teams he’d be open to moving to. The latest rumors suggest the Bears are doing all they can do get him.

According to Fox Sports host Colin Cowherd, he’s heard that Chicago general manager Ryan Pace is, in essence, throwing everything and the kitchen sink at Seattle to try to acquire Wilson:

At this point, no NFL fans outside of the Emerald City want Wilson to keep slogging away for a franchise he doesn’t want to play for, and one that doesn’t want to cede him more control over the offense.

Seahawks coach Pete Carroll is very much an old-school philosopher. Run the ball, stop the run. Wilson is capable of running a system that allows him to air it out, which he showed in the first half of 2020 as the NFL MVP front-runner.

Alas, now Wilson and Seattle have come to an impasse. For the sake of the game, and for both the Seahawks and Bears organizations, this is a deal that needs to happen.

What can Bears offer Seahawks for Russell Wilson — and how does Seattle find its next QB?

The writing is on the wall at this point. Recent buzz suggests Pace and Chicago head coach Matt Nagy, who are on the hot seat entering 2021, are fully open to mortgaging the future to secure the rights to Wilson, considering they probably don’t have one if they can’t unearth a superstar talent at quarterback this offseason.

Another tell was this sports betting-related development spotted by NESN’s Sam Panayotovich as it relates to the Bears and Wilson:

The author of this article floated an “ultimate” Russell Wilson trade to Chicago in a recent column that would have ripple effects on multiple NFL teams. Here was the compensation Seattle netted in exchange for only Wilson, as presented therein:

Obviously, for this to work against the tighter NFL salary cap of 2021, it’d require some additional maneuvering, contract restructures, and moving of other players on both sides. The Seahawks only ultimately cost themselves an additional $7 million if Wilson is traded, per Over the Cap, but they’re left with only $10 million or so in cap — and they’d be taking on Hicks and Fuller at a combined $21.5 million.

Our aforementioned “ultimate trade “article then had Seattle shipping star receiver Tyler Lockett to New England — who needs a skill position upgrade more than the Patriots? — and dealing left tackle Duane Brown to the in-win-now-mode Los Angeles Chargers. That’d net a 2022 first-round pick, and additional second- and third-round picks in 2021. Lockett and Brown clear just over $24 million in cap space.

So, the Seahawks turn around and send a second-round selection to the rebuilding New York Jets in exchange for Sam Darnold, who Cowherd floated as a possibility given Carroll’s ringing endorsement of the signal-caller. Seattle gives Darnold a test run for this season, and with its massive haul of assets from these trades, decide what to do from there.

That’s right. Chicago somehow gets to keep Khalil Mack and Allen Robinson, yet still comes over the top of any other offers out there and can justify Fuller and Hicks in the package for three reasons: They’re saving cap space, they’re getting Wilson, and they’re earning compensation for two defenders entering contract years.

Lockett and Brown are scheduled to be free agents in 2022, too. The Patriots actually have the financial means to extend Lockett for the money he wants, and can afford to sacrifice their 2021 third-round compensatory pick and a 2022 first-rounder to land him. Also coming to Seattle in that hypothetical trade is New England’s N’Keal Harry, who gets a fresh start out of Foxborough as the Seahawks’ new No. 2 opposite DK Metcalf.

Who loses here? Anyone? Nope. No one.