The injury bug has brutally bitten the Baltimore Ravens leading into their 2021 season, as running backs J.K. Dobbins and Gus Edwards will be out for the entire year.

As a means of reinforcing the backfield, Baltimore signed Latavius Murray on Friday, per ESPN’s Adam Schefter:

To the Ravens’ credit, they’re being proactive to address their suddenly thin tailback depth chart. In addition to losing Dobbins and Edwards, Justice Hill suffered a torn Achilles. Baltimore has already signed the likes of Le’Veon Bell and Devonta Freeman to their practice squad.

Murray is the latest addition to the mix, as the team now has three prior 1,000-yard rushers to complement MVP quarterback Lamar Jackson.

Both Freeman and Bell have seen their production significantly decline over the past two years, so even though Murray is the oldest of the bunch at 31 — the former two are 29 — he’s more accustomed to and fit for a timeshare role.

See where the Ravens rank in our latest NFL power rankings

Having played the past two seasons for the New Orleans Saints, Murray has shown he can thrive when given the opportunity. He averaged a healthy 4.5 yards per carry en route to 656 yards and four touchdowns in 2020. He’s a decent pass-catcher, too, but often deferred in those situations to Alvin Kamara.

Among the three veterans the Ravens have signed, Murray feels like the player who has the best shot at a significant role. Then again, we’ve seen Bell post four seasons of 66 receptions or more, so instead of deploying Murray as an every-down back, Bell could at least be the third-down specialist. 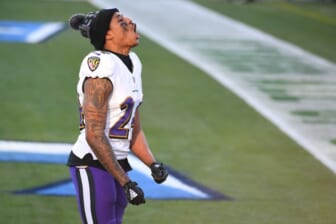 Murray’s massive 6-foot-3, 230-pound frame is a good fit for Baltimore’s bruising rushing attack, which has the dynamic element of Jackson’s running ability. Never before has Murray been paired with a dual-threat QB, so he may have another level of his game to unlock.

But with opponents keyed in on the Ravens’ running game, Jackson will need Murray, Bell, and/or Freeman to all help him establish the run, get some easy completions and keep him protected, as Baltimore could have a very one-dimensional offense.

Can the Baltimore Ravens still make the postseason with all their injuries? Read our NFL playoff predictions now