The Arizona Cardinals have re-signed wide receiver AJ Green, however, that shouldn’t be the last of their notable moves this offseason.

On Thursday, it was announced that the Cardinals had come to terms on a new one-year deal with free agent WR Green. Terms of the deal were undisclosed, but it brings the 33-year-old back to the team after playing his first season in Arizona in 2021.

The 11-year veteran, and former seven-time Pro Bowler for the Cincinnati Bengals, played in 16 games for Arizona last season and started in nine. Despite the low number of starts, Green still pulled in 54 catches for 848 yards and three touchdowns.

It was his most productive season since his most recent Pro Bowl year in 2017. He had down years in every year after, including missing the entire 2019 season due to an ankle injury.

Bringing back Green is a necessary move for the Arizona Cardinals, however, there are several more decisions they need to make to improve on a season where they finished second in the NFC West to the eventual NFL champion Los Angeles Rams.

Arizona Cardinals need to give Kyler Murrary an extension

The Cardinals reportedly haven’t attempted to try and sign franchise quarterback Kyler Murray to a contract extension yet. Despite him and his agent making overtures to do so, and friction developing between the player and team over a lack of movement on a deal. The Cardinals need to stop playing around and not give the two-time Pro Bowler a reason to play out his contract and test his value in free agency.

Arizona’s position on a new long-term deal is understandable. The 24-year-old is signed until 2023, what’s the rush? And that is a fair way to look at things. However, in the end, players of his talent and age hold the leverage. If he goes out and has more Pro Bowl seasons in 2022 and 2023, he only adds to his value and gets pricier. Considering that the Browns gave Deshaun Watson a fully guaranteed deal for $230 million, it would be wise for the Cards to re-up Murray now before the extension cost possibly gets to an absurd level.

The organization needs to improve its offensive line heading into the new season. They have a top-level talent in Murray and need to try and keep him healthy. They should attempt to address this issue with their pick at 23, and Texas A&M guard Kenyon Green would be a good option.

The team added a decent veteran in Will Hernandez last month, but the 6-foot-4, 325-pound Green is a versatile talent that played multiple spots in 2021 and could be plugged in where he is most needed in 2022. Plus, there is far more upside in the Texas native long-term than Hernandez.

One of the biggest departures for the Cardinals this offseason was Pro Bowl EDGE rusher, Chandler Jones. Unfortunately for them, the team does not have the salary-cap space to scoop up a player of equal value. However, there is a solid option out there and one they are familiar with in Carlos Dunlap. 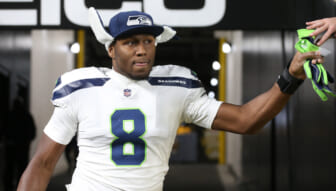 Also Read:
Could the Seattle Seahawks cut and then re-sign Carlos Dunlap for the 2nd year in a row?

The 13-year veteran played the majority of the last two seasons for division rivals the Seattle Seahawks, so the Cardinals know how worthwhile he is as a pass rusher after racking up 8.5 sacks last season. However, at this point in his career, he is likely to come at a team-friendly rate. He helps to address a need while not taking the Cards in cap tax territory.