Kyler Murray yet to receive contract offer from Cardinals, other teams could get involved 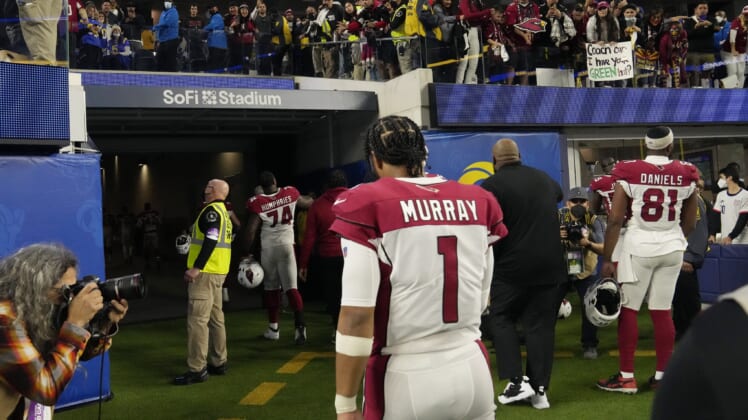 There have been several starting quarterbacks who have received contract extensions this offseason. For the ones who have been extended, it’s clear who their teams want under center next season and beyond. But what about those on rookie contracts who are extension-eligible, like Kyler Murray of the Arizona Cardinals?

It’s not for a lack of trying from Murray and his agent’s perspective. Murray’s agent, Erik Burkhardt has made attempts to get his client a long-term extension keeping him in Arizona for the foreseeable future. Yet, those talks didn’t get very far, and Burkhardt has reportedly since rescinded the initial contract proposal to the Cards.

OK, so naturally, this is a negotiation right? Not exactly, according to NFL Network’s Tom Pelissero, who passes along word that general manager Steve Keim and the rest of the front office haven’t even made an offer to Murray.

So what’s next? Where do Murray and the Cardinals turn now? Murray is under contract for the 2022 season, but at a low cost.

In 2023, his fifth-year option kicks in, which accounts for a $29.7 million salary, fully guaranteed to Murray. They already know Murray is under contract for another two seasons, so from their perspective, extending their two-time Pro Bowl QB now will only cost them more up front.

Why are the Cardinals playing hardball with their franchise QB?

There could be a number of reasons why the Cards are playing hard to get. As mentioned, they don’t have to do anything with Murray’s contract. As it stands right now, the team is getting an absolute bargain compared to his total performance in the three years since being drafted.

Although they may not have done much this past offseason, that could change next year, which might be the time they look to finally extend Murray as he enters his contract year.

Then, there’s also the reported schism between Murray and his teammates at times. Some suggest he’s too ‘self-centered‘, though the Cards were quick to note that they love their 2019 No. 1 overall pick and that they have no desire to trade him.

Of course, the biggest factor might be Murray’s inconsistent play. Sure, he has the talent to be among the best quarterbacks in the NFL at times, but then there are others where the diminutive QB struggles badly with accuracy issues. On the biggest stage of his life thus far, Murray failed miserably

At the same time, did Murray not lead his team there in the first place? Would they have gotten close without him? Probably not. It’s not his fault DeAndre Hopkins wasn’t available due to injury once the playoffs arrived, that’s just football sometimes.

There’s no reason why they should hesitate to make Murray among the top earners in football. Should he be the highest-paid QB? No probably not, and if that’s what the dual-threat, dual-sport athlete is pushing for, he’s not going to get it. For that reason, maybe everyone would be better off pushing this negotiation back another year.

Could Kyler Murray be traded?

Of course, as Tom Pelissero alluded to, maybe K1 doesn’t like the idea of going another season playing under his rookie deal, or at least not having the long-term security that comes with a new contract.

Instead, maybe Murray would prefer a trade, to a team that does see his value and would be glad to sign him to an extension immediately. Maybe he figures if Deshaun Watson can land a $230 million, fully guaranteed deal after spending an entire year out of football while battling legal issues that Murray can do the same, or better contractually.

There are several teams around the league who arguably don’t have a better starting quarterback than they had last season who missed the playoffs, it’s not hard to envision teams lining up for a crack at Murray’s services. Yet, there are others who might like their current QB, but see the potential to improve, should a young, Pro Bowl talent with no off-field issues should become available.

That’s nearly half the league, at 14 teams and a case could be made for a few others to get involved. Basically, the chance to acquire a former No. 1 overall pick, who’s still just 24 years old, with two Pro Bowls and a playoff appearance under his belt doesn’t come around often. If all they have to do is part with maybe two to three first-round picks and pay the man, well that’s likely a price many around the league would be willing to meet.