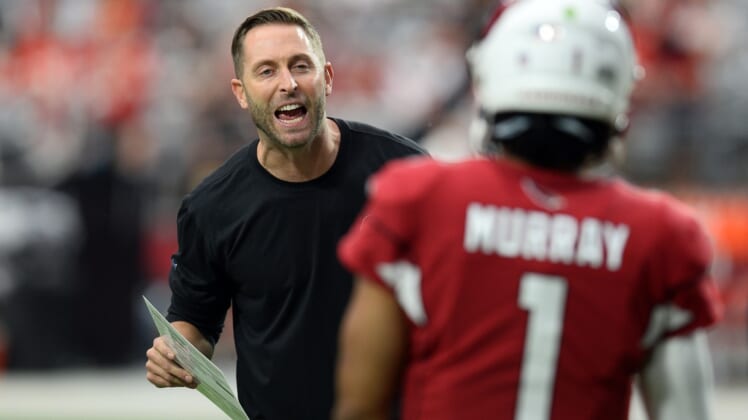 Arizona Cardinals coach Kliff Kingsbury said Tuesday that he is in “a good place” with quarterback Kyler Murray, one day after Murray’s agent released a statement saying Murray wanted a new contract.

“I think our long-term goal here is to have Kyler be our quarterback,” Kingsbury told reporters at the scouting combine in Indianapolis. “He understands that. He understands my view of him and how I feel about him.

“It’s all part of the business right now and things we’ll continue to work through.”

Kingsbury deferred contract-specific questions to general manager Steve Keim while projecting confidence that the issue would be settled. Murray scrubbed all references to the Cardinals from his Instagram last month, setting off a drama-filled offseason.

ESPN reported that some Cardinals decision-makers had questions about Murray’s leadership and ability to handle adversity.

Kingsbury said he did not know Murray’s agent, Erik Burkhardt, would post his statement of more than 1,000 words online Monday. The coach said Murray met with him and Cardinals brass after the season ended with a 34-11 playoff loss to the eventual Super Bowl champion Los Angeles Rams.

“We had a great talk right after the season with him,” Kingsbury said. “He talked about his concerns, we talked about what we wanted. So we’re going to work through those things.”

Kingsbury then added he has not spoken with Murray since Burkhardt released the statement, but that they speak “regularly” — appearing at first to say “frequently” before changing his choice of words.