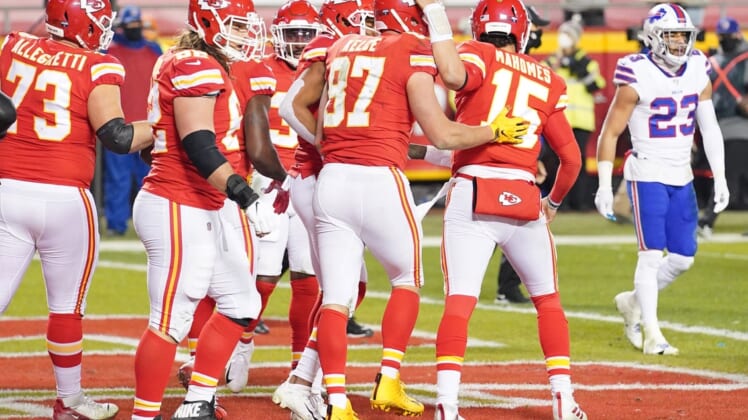 The Kansas City Chiefs are headed back to the Super Bowl following a brilliant 38-24 win over the Buffalo Bills in Sunday’s AFC Championship Game.

Patrick Mahomes had it going big time, finding connections with Travis Kelce and Tyreek Hill throughout the game. Meanwhile, Kansas City’s defense put a ton of pressure on Josh Allen throughout the evening.

In the end, the Chiefs overcame an early 9-0 deficit to win this game going away. Here are the biggest winners and losers from the AFC Championship Game as the Chiefs prepare for Super Bowl LV against the Tampa Bay Buccaneers.

This five-time Pro Bowl performer entered Sunday’s AFC Championship Game on an absolute roll, having recorded 64 receptions for 947 yards with 11 total touchdowns in his previous nine outings. Already seen as one of the most-electric players in the game, Hill was back up to his old tricks on Sunday.

That’s just your ho-hum 71-yard catch-and-run. It also set up a Chiefs touchdown late in the third quarter for a 31-15 lead over Buffalo. All said, Hill recorded nine catches for 172 yards in yet another brilliant all-around performance from Cheetah. The dude is just too good.

As for Kelce, he broke the single-game playoff record for catches from a tight end. The All-Pro performer hauled in a whopping 13 passes for 118 yards and two touchdowns. Much like Hill, this tight end has been on a roll recently. Including Sunday’s game, he’s caught 86 passes for 1,142 yards in his past 10 outings. That’s just insane.

After opening up a 9-0 lead in the first quarter, things were looking good for Sean McDermott’s squad. Unfortunately, the team just couldn’t get out of its own way in the red zone after scoring a first-quarter touchdown. Buffalo’s next two drives inside the Chiefs’ 20 resulted in field goals. The drives went for 73 and 67 yards, respectively, and ended on chip-shot field goals inside the Chiefs’ 10.

That just can’t happen against Kansas City’s high-powered offense. Trading field goals for touchdowns is never a recipe for success. Add in Patrick Mahomes’ presence, and this is magnified even further. It’s also important to note that the blame can be placed in several directions. From Josh Allen’s struggles to McDermott failing to go for it on fourth down multiple times, this is what cost the Bills Sunday evening at Arrowhead.

Dealing with a head injury and turf doe following last week’s win over the Browns, Mahomes was questionable heading into the AFC Championship Game. Once it became apparent about mid-week that he would play, we had no idea whether the reigning Super Bowl MVP would be 100%.

Mahomes answered that question and more throughout the game. The quarterback completed 29-of-38 passes for 325 yards with three touchdowns and zero interceptions in the 14-point win. Mahomes continues to play at an otherworldly level during the playoffs. Sunday’s game included, he’s tallied 21 total touchdowns against two interceptions in seven career postseason starts. It now has Kansas City one win from repeating at Super Bowl champs.

Despite dealing with an oblique injury heading into the AFC Championship Game, Diggs had performed extremely well thus far in the playoffs. Through two games, the NFL’s leading receiver from the regular season had hauled in 14 catches for 234 yards in two games.

For some reason, Diggs just did not have it for his Buffalo Bills against the Chiefs on Sunday. The talented receiver hauled in just four passes through the first 3.5 quarters before stat-padding in garbage time, failing to show up when Buffalo needed him the most. Sure his injury could have played a role here. Even then, the Pro Bowler just didn’t do anything of substance for a Bills offense that was relying on him.

In total, Kansas City’s defense hit John Allen 10 times and sacked the quarterback four times Sunday evening. It was a team-wide effort with eight different Chiefs defenders putting a hit on Allen. Even then, Clark is the one who stands out the most.

The Pro Bowl edge rusher pressured Allen a total of six times throughout the game and had two quarterback hits. He also took down Allen with a huge third-down sack and wrapped him up for another in the fourth quarter. It’s not easy going up against a dual-threat quarterback. Maintaining the edge was important for Kansas City. That’s exactly what Clark did in a 38-24 win.