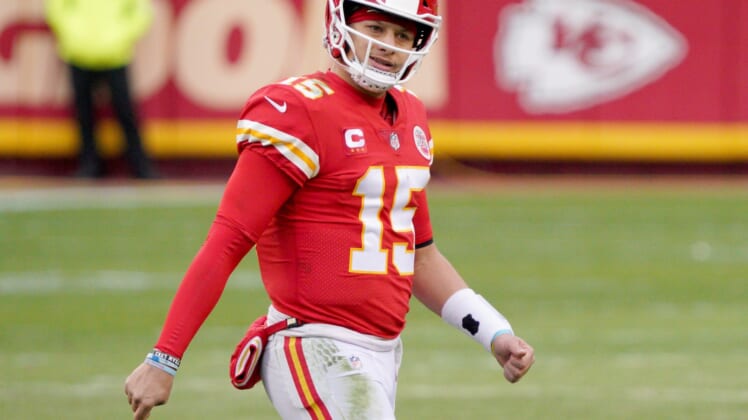 Kansas City Chiefs quarterback Patrick Mahomes cleared the concussion protocol after a scary moment against the Cleveland Browns. Still, he will be playing through a more painful injury in Sunday’s AFC Championship Game.

Before Mahomes was twisted around and taken to the ground against Cleveland, he was hobbled by a foot injury. After exiting the game and being ruled out due to concussion protocols, though, the issue became an afterthought. Now, with the reigning Super Bowl MVP cleared to play, more is known about the real issue that caused him problems this week.

According to NFL Network’s Ian Rapoport, the Kansas City Chiefs diagnosed Mahomes with turf toe in his left foot. While he wasn’t listed on the injury report with the issue and it isn’t expected to require offseason surgery, it was a problem for him against the Browns.

Mahomes didn’t look right after his left foot planted in the grass and moved awkwardly. Throughout the broadcast in the divisional round, multiple camera shots kept showing the 25-year-old quarterback grimacing in pain. He still completed 21-of-30 pass attempts for 255 yards and scored two total touchdowns, but he wasn’t quite the same throwing to his left.

Any time Mahomes had to plant his foot to put velocity on throws to his left side and landing on that toe caused him problems. Because of the alterations made to his mechanics, he threw several passes short of the receiver or put them in a position that limited opportunities for yards after catch.

It’s something the Bills likely took notice of during their film evaluation. For head coach Sean McDermott and defensive coordinator Leslie Frazier, that could mean finding more ways to pressure Mahomes with blitzes. While it’s risky against the NFL’s top quarterback, he might have more issues moving off the pocket and landing on that foot when pressured.

According to Pro Football Focus, Mahomes has thrown nine touchdown passes to the left side of the field this season. So, the Chiefs’ offense should be more than fine if more of their lays are designed to attack the middle of the field and the right side.

Even at less than 100%, expect Patrick Mahomes to still put up great numbers against Buffalo’s defense. With a trip to Super Bowl LV on the line, Mahomes is likely willing to play through anything for a shot at consecutive titles.