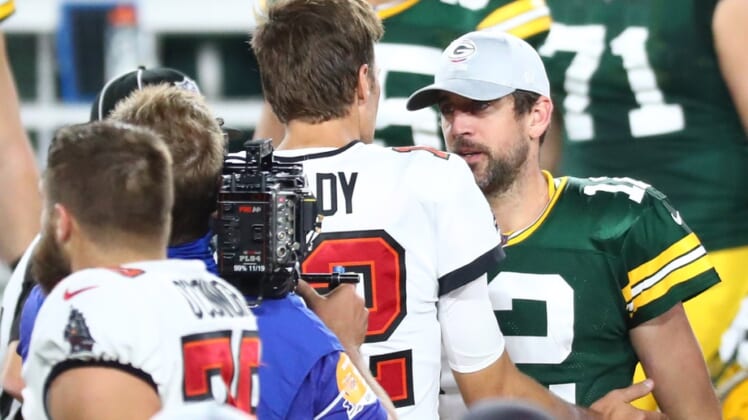 Championship Sunday is almost here and four teams will be putting it all on the line for the opportunity to play in Super Bowl LV. The AFC and NFC championship games offer fantastic battles this year, serving as the perfect way to cap off the NFL Playoffs.

In the blistering cold at Lambeau Field, Tom Brady and the Tampa Bay Buccaneers face Aaron Rodgers and the Green Bay Packers. It’s a clash between the greatest quarterback in NFL history and arguably the most talented passer the game has ever seen. After missing out on Super Bowl battles between these two, now the future Hall of Famers will meet to determine who represents the NFC in Super Bowl LV.

Later on Championship Sunday, we’ll see the Buffalo Bills duel the Kansas City Chiefs. Patrick Mahomes and Josh Allen are two of the league’s brightest stars, with the AFC Championship Game potentially serving as the spark for a new rivalry. There is plenty at stake for both sides, with the Chiefs seeking to defend their title and the Bills hoping to return to the Super Bowl for the first time in decades.

Let’s dive into our bold predictions for Championship Sunday.

The last time these two faced off, we saw a stunning outcome. After entering the fourth quarter with a 10-0 lead, Aaron Rodgers threw a pick-six and another interception returned inside the five-yard line on consecutive drives. It was one of the worst performances in his career and the lone stain on his NFL MVP resume. Meanwhile, Brady needed just 166 passing yards and two touchdowns in a 38-10 victory with his defense dominating.

Expect things to be a lot different on Championship Sunday. Tampa Bay’s defense can shut down quarterbacks, but we’ve also seen some ugly stretches from this secondary. Opposing passers averaged an 83.2 quarterback rating and completed 66.1% of passes from Week 1-8 against the Bucs, but a 105.3 quarterback rating and 72.6% completion rate in the second half of the season. Tampa Bay will certainly blitz, but Rodgers had a 15/1 TD/INT ratio and 123.5 passer rating, per NFL.com, against the blitz outside of the Week 6 game. Plus, this offense is far more in sync than we saw back then.

Green Bay’s defense has played a lot better as of late, with the pass rush stepping up and All-Pro corner Jaire Alexander locking down wide receivers. But this is Tom Brady we’re talking about. He’ll take the quick throws against the Packers’ soft coverage, allowing Chris Godwin, Rob Gronkowski and potentially Antonio Brown to make plays. Then, after racking up the quick shots, they’ll hit a play or two deep downfield.

Brady and Rodgers are two of the best quarterbacks in cold temperatures, so we’re not worried about the snow. Expect 300-yard performances from each of them and three touchdowns apiece, plus a fourth Rodgers’ touchdown added on.

So much of the spotlight for Buffalo’s explosion on offense this season centers on Josh Allen. It’s understandable. Any time a quarterback jumps from completing 58.8% of his passes and posting an 85.3 quarterback rating to a 69.2% completion rate and 107.2 rating, that is remarkable. Lost in all of that focus on Buffalo’s star passer is Stefon Diggs’s role in this ascension.

Make no mistake, Diggs is a top-five receiver in the NFL today and makes a strong case for the best route runner. According to Next Gen Stats, he ranks in the top five in receiving yards on five different receiving routes. He is especially lethal on hitch routes, per NGS, with a league-leading 50 receptions and 590 receiving yards.

Even if Bashaud Breeland (concussion protocol) plays on Championship Sunday, Buffalo sees a matchup to exploit. Kansas City’s cornerbacks are a weak point on this roster and they don’t have anyone capable of squaring off with Diggs in one-on-one coverage. Given this game is almost certain to be a shootout, the NFL’s most targeted receiver will have a monster game.

Clearly, we’re confident that Brady will perform well at Lambeau Field. While frigid temperatures generally mean bad things for an aging quarterback with declining physical talents, Brady continues to defy Father Time. As a result, we’re betting on him to put up some impressive numbers in this matchup.

With that said, Green Bay’s offense is better and this team carries home-field advantage. The Packers are the favorites in this game and for a good reason. Both quarterbacks should go shot for shot throughout most of Sunday’s game, taking the NFC title to the fourth quarter. This is routinely when Brady shines, we think he will for a while, but it all ends on the final drive.

Brady could get the football back down by one score with only a few minutes remaining and Tampa Bay’s season on the line. That’s when the Packers will really start sending Za’Darius Smith, Preston Smith, Rashan Gary and Kenny Clark. Brady, who had a 54.5 quarterback rating and five interceptions under pressure this season, will make an ill-advised throw to Mike Evans and Jaire Alexander will snag it. After that, the Packers kill the clock and punch their ticket to Super Bowl LV.

There aren’t many NFL teams with the firepower to match up with Kansas City’s offense. Allen can match some of Patrick Mahomes’ best throws and both of these teams can drop 30-plus points with relative ease. We expect to see a lot of that on Championship Sunday, making this game a delight for NFL fans.

A strong argument can be made for betting on the team with experience. Andy Reid has a Super Bowl ring, which means he can be willing to take more chances. We even saw that on his fourth-down call to seal the victory against the Cleveland Browns. But, for all of that in Kansas City’s favor, Buffalo has the edge on defense and regarding health.

It’s not just about Mahomes’ upper-body injury. In that same matchup against the Browns, he struggled with accuracy on throws to his left following a toe injury. If that injury proves to limit him on Sunday, that’s a significant edge in Buffalo’s favor. Just as important, getting hot at the right time is crucial during the playoffs and the Bills’ defense has played better than Kansas City’s unit as of late.

There’s real potential for the AFC Championship Game to end 38-35 or 41-35. In games like that, one turnover or a missed throw can make all the difference. We’re willing to bet on Buffalo’s defense to make one play, either creating a takeaway or taking advantage of Mahomes’ toe injury with pressure, to pull off the upset. If that happens, the Bills will head to their first Super Bowl since 1994.