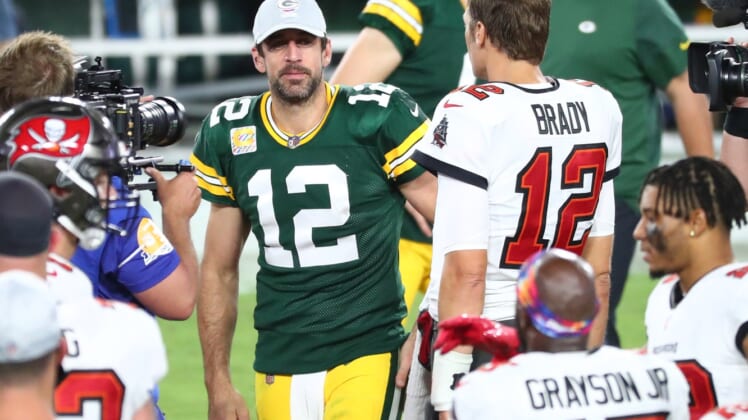 The NFL Playoff schedule has only three games remaining. The Tampa Bay Buccaneers and Green Bay Packers will do battle for the NFC title to kick off Championship Sunday. Meanwhile, the Kansas City Chiefs will host a game Buffalo Bills squad Sunday afternoon in the second of two conference title tilts.

There’s so many storylines and matchups to look at in these two games heading into Super Bowl LV. Can Tom Brady punch his ticket to a 10th big game? Standing between the all-time great is a Packers team led by likely NFL MVP Aaron Rodgers, who is playing at the highest level of his career.

Over in the AFC, a major question came out of the Chiefs’ divisional-round win over the Cleveland Browns. Throughout the next several days, the talk will surround the status of reigning Super Bowl MVP Patrick Mahomes, who suffered a head injury on Sunday.

It’s in this that we give you the NFL Playoff schedule with predictions for the two games on Championship Sunday.

Simply sensational. That’s the best way to describe what we’ve seen from Aaron Rodgers and the Packers through the first two games of the NFL Playoffs. Fresh off a blowout win over the Los Angeles Rams in the divisional round, these Packers are averaging a whopping 33.5 points per game. The likely NFL MVP, Rodgers has accounted for seven touchdowns against zero interceptions.

Rodgers’ success dates further back, too. He’s tallied 41 total touchdowns compared to three interceptions in his past 12 starts dating back to Week 7 of the regular season. It’s no surprise that Green Bay boasts a 10-2 record and is averaging 31.6 points during that span. Talk about some otherworldly numbers.

As for the Buccaneers, they are winning in unexpected ways. That included young defenders Sean Murphy-Bunting, Carlton Davis, Antoine Winfield and Devin White making an all-time great in Drew Brees look washed during the divisional round the NFL Playoffs.

Tom Brady did account for three total touchdowns against zero interceptions in that win. However, he’s not at the same level as Rodgers right now.

The biggest key for Tampa Bay will be for the likes of Murphy-Bunting and Davis to continue their lockdown ways against Davante Adams and Co. They performed well against the Brees-Thomas duo in the divisional round, but this is a different monster. Adams has caught 124-of-159 targets for 1,440 yards with 19 touchdowns in 15 games this season, playoffs included. Those are similar to the numbers Thomas put up for the Saints in 2019.

If Tampa Bay can somewhat limit Adams’ production, the onus will then be on Marquez Valdes-Scantling and Allen Lazard to pick up the slack. The bad news for these Bucs? Those two combined for 1,141 yards during the regular year. Noticing a theme here? Not even mentioning running back Aaron Jones and impressive tight end Robert Tonyan, these Packers are absolutely loaded. That should be enough to pull off a home win and a trip to the Super Bowl in a narrow contest.

At this point, it’s not even known whether reigning Super Bowl MVP Patrick Mahomes will be a go for the Chiefs. He suffered an ugly-looking head injury in the second half of Sunday’s win over the Cleveland Browns and did not return after being tested for a concussion.

Related: Winners/losers from Chiefs NFL Playoff victory over the Browns

While Chiefs head coach Andy Reid said that Mahomes was doing fine after the game, he’ll obviously have to go through the concussion protocol. To say that this would be a major swing against the Buffalo Bills in the AFC Championship Game would be a major understatement. Sure Chad Henne played well in relief of Mahomes in the divisional round. In no way does that make him anywhere near a threat should the veteran be forced to start this coming weekend.

As for the Bills, they are coming off wins over Indianapolis and Baltimore to open the playoffs. Buffalo’s defense yielded just three points in a two-touchdown win over the Ravens last week. It’s a game that saw Sean McDermott’s defense put consistent pressure on quarterback Lamar Jackson.

This is one of the primary things that makes Buffalo so dangerous against Mahomes and Co. If a defense that was middle of the pack during the regular season can continue to step up in the playoffs, these Bills can go into Arrowhead and take out the defending champs. After all, Josh Allen has followed up a brilliant regular-season performance by accounting for four touchdowns against zero interceptions thus far in the playoffs.

The biggest key outside of stopping Mahomes (should he play) for Buffalo will be to find some sort of a rushing attack. Running backs have attempted just 19 rushes through two playoff games. In fact, Allen is the Bills’ leading rusher during this span. A lack of balance could be an issue against a defensive front led by Pro Bowlers Chris Jones and Frank Clark.

As for the Chiefs, they were still able to get it going on the ground last week with stud rookie first-round pick Clyde Edwards-Helaire sidelined to injury. If Henne has to go in this one, that will be a major factor. Assuming Mahomes can play and isn’t limited, I expect a close game. Even then, look for the Bills to pull off the road upset and earn a shocking trip to the Super Bowl.