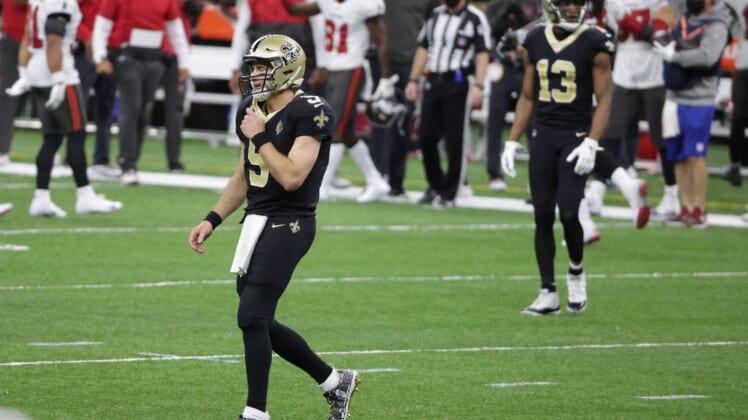 It was billed as GOAT going up against an all-time great. The Tampa Bay Buccaneers squaring off with the New Orleans Saints with a spot in the NFC Championship Game on the line.

Could Tom Brady and Drew Brees turn back the clock at a combined age of 85? Would youngsters step up in hopes of sending their teams to Lambeau Field to take on the Green Bay Packers next week?

These questions were answered big time as the Buccaneers went into the Bayou and handed New Orleans a 30-20 loss in what could very well be Brees’ final NFL game. Here, we take a look at the biggest winners and losers from the Buccaneers’ 10-point victory over New Orleans.

After missing last week’s win over the Washington Football Team with a quad injury, Ronald Jones toughed it out Sunday against the Saints. He was obviously nowhere near 100%. That did not stop Jones from putting up 62 yards on 13 attempts in the Buccaneers’ win. That was much needed with Tom Brady struggling early in the game.

One year after breaking multiple single-season reception marks, Thomas has dealt with myriad injuries and some major internal drama in New Orleans. Despite putting up five catches for 73 yards and a score in the Saints’ wildcard victory over the Chicago Bears, Thomas struggled big time against a youthful Buccaneers defense.

Primarily taking on Sean Murphy-Bunting, Thomas was held without a single catch on four targets. Drew Brees was also intercepted two times when throwing in his direction throughout the game. Sure Brees struggled big time (more on that later), but Thomas did not help his quarterback out at all. One now has to wonder what this might mean for Thomas’ future in New Orleans.

Related: Star NFL players who could change teams in 2021

We already knew second-year linebacker Devin White was a major force for the Buccaneers. As a top NFL Defensive Rookie of the Year candidate, Antoine Winfield Jr. has opened up eyes in Tampa Bay this season. It’s one of the primary reasons a previously inexperienced defense has stepped it up in recent weeks.

That did not change Sunday against the New Orleans Saints. Add in the brilliant performance from cornerback Sean Murphy-Bunting, and this unit was flying all over the field for defensive coordinator Todd Bowles.

Winfield forced a fumble with the Bucs down in the second, only to be recovered by White. That led to a game-tying touchdown from Fournette. Meanwhile, Murphy-Bunting had a huge interception to set up another score. If these youngsters can play like this in the NFC Championship Game, the Packers will be on upset alert.

Immediately ahead of Sunday’s game, Fox Sports NFL insider Jay Glazer reported that Brees would retire after the Saints’ playoff run. A veteran of 20 seasons, it has become increasingly evident that Brees’ skill set has taken a major hit. That includes serious injuries in each of the past two years.

Brees’ regression became all-too evident at home against the Buccaneers. His arm strength just isn’t there. His decision-making also took a major hit, as evidenced throughout the game. When all was sand and done in what will likely be Brees’ final game, he threw three ugly interceptions. The Saints turned the ball over four times, resulting in 21 points for the Tampa Bay Buccaneers. That was the difference in this one. And sadly, Brees’ career ends on a sour note.

After missing the past three games to an ankle injury, Smith returned for Sunday’s outing against Tampa Bay. Given the struggles we saw from Michael Thomas and others here, it was a good thing that the former third-round pick suited up.

Including a bomb from Jameis Winston, Smith caught three balls for 85 yards and two touchdowns. He joined Alvin Kamara in pretty much being the Saints’ only offense in this game. At just 25 years old, Smith has a bright future with the New Orleans Saints.