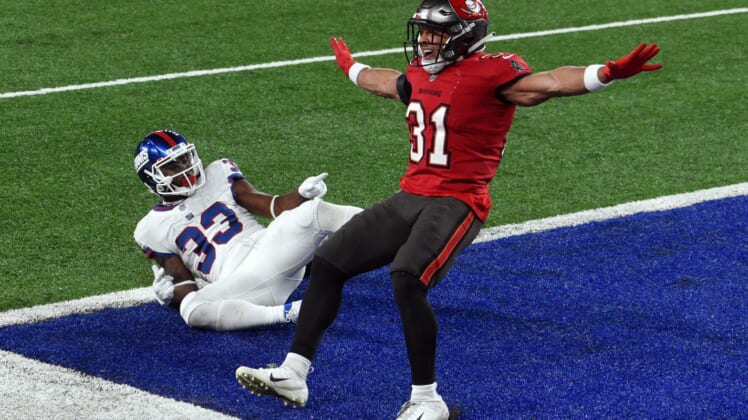 Tampa Bay Buccaneers safety Antoine Winfield Jr. (31) reacts as New York Giants running back Dion Lewis (33) looks to the official for the pass interference call on the Giants’ two-point conversion attempt late in the game. The Buccaneers defeat the Giants, 25-23, at MetLife Stadium on Monday, Nov. 2, 2020, in East Rutherford.Nyg Vs Tb

Underrated NFL players could very well dictate who makes an appearance in Super Bowl LV on Feb. 7. Sure the likes of Aaron Rodgers, Patrick Mahomes, Josh Allen and Tom Brady will be the talk of Championship Sunday. That’s fine and dandy.

But as we have learned throughout the years, it’s those players who are not household names who could step up and make a major impact.

For the Packers, that could include a former undrafted free agent wide receiver out of Iowa State going up against the Buccaneers in the NFC Championship Game. Over in the AFC, I am highly intrigued to see how a third-year back in Kansas City will perform against the Bills.

Rightfully, most of the focus when it comes to the Packers’ offense is on MVP favorite Aaron Rodgers and top battery mate Davante Adams. The two continue to make sweet music, resulting in Green Bay being one home win away from its first appearance in the Super Bowl since 2011.

With that said, the defending NFC North champs have some of the most underrated NFL players today. That includes this former undrafted free agent from Iowa State. Lazard, 25, caught four passes for 96 yards and a touchdown in last week’s win over the Los Angeles Rams. He’s also put up north of 450 receiving yards in each of the past two seasons.

With the likes of Sean Murphy-Bunting and Carlton Davis set to focus primarily on Adams after a strong performance last week against the Saints, I am expecting single coverage to go Lazard’s way. That’s especially true with Antoine Winfield Jr. likely to play over the top against Adams. Look for another big game from this unheralded pass-catcher.

Over the course of the past four seasons with the Carolina Panthers, this former undrafted free agent from Troy was among the most underrated NFL players on the defensive side of the ball. That span saw Addison record a combined 56 quarterback hits and 39 sacks.

Rejoining former Panthers defensive coordinator Sean McDermott in Buffalo this season, most expected Addison to play at a high level. That did not happen during the regular year. Addison recorded just eight quarterback hits and five sacks in 15 games. He did, however, come on strong with a sack in Buffalo’s divisional-round win over Lamar Jackson and the Baltimore Ravens.

Working with rookie A.J. Epenesa opposite Jerry Hughes and Trent Murphy, Addison will be a major key for the Bills as they look to stop Patrick Mahomes. If he can put consistent pressure on Mahomes’ blindside against left tackle Eric Fisher, it could loom large in this one.

A legit NFL Defensive Rookie of the Year candidate, Winfield’s performance against the Saints last week was nothing short of extraordinary. He put up great coverage over the top en route to limiting Michael Thomas to zero catches on four targets. Yeah, that was a real thing. Winfield also recorded six tackles and a game-changing forced fumble in the process.

As well as the Buccaneers’ group of corners played against New Orleans, it’s going to be a much different task going up against Davante Adams in this one. Playoffs included, Adams has caught 124 passes and 19 touchdowns in 15 games this season. He’s on a completely different level than any other receiver in the game.

That’s where Winfield Jr. comes into play. He will line up as a single-high safety in an attempt to limit what Aaron Rodgers can do when targeting Adams. It’s pretty much the most-important role on the field for the Bucs come Sunday outside of Tom Brady himself. Given what we’ve seen from him this year, the rookie second-round pick should be more than up to the task.

At this point, it’s not yet known whether stud Chiefs rookie running back Clyde Edwards-Helaire will be on the field for the AFC Championship Game. He’s missed the past three games with a high-ankle sprain. Remember, this is the same injury that sidelined Christian McCaffrey for six weeks during the regular season.

Even if CEH is able to go, the expectation is that Williams will get a bulk of the reps for Kansas City against Buffalo. The third-year back out of LSU put up a career-best performance in last week’s win over Cleveland, going for 94 total yards on 17 touches.

Given the questionable status of Patrick Mahomes, the importance of Kansas City’s rushing attack is taken to a whole new level. This takes on even more significance going up against a Bills defense that ranked in the middle of the pack stopping the run during the regular season and gave up a whopping 21 touchdowns on the ground.

Already one of the most underrated NFL players at the tight end position, Tonyan has acted the part of a safety valve for Aaron Rodgers. Undrafted out of Indiana State back in 2017, he jumped on to the scene during the regular season by hauling in a whopping 11 touchdowns on 52 catches. That’s a ratio.

Tonyan also caught all four of his targets for 60 yards in last week’s win over a Rams defense that fielded the best unit in the NFL during the regular year. Can the tight end keep up this strong performance against a talented, young Buccaneers defense? Tampa Bay did yield 86 receptions to tight ends in 16 regular-season outings. That could loom large in the NFC Championship Game.