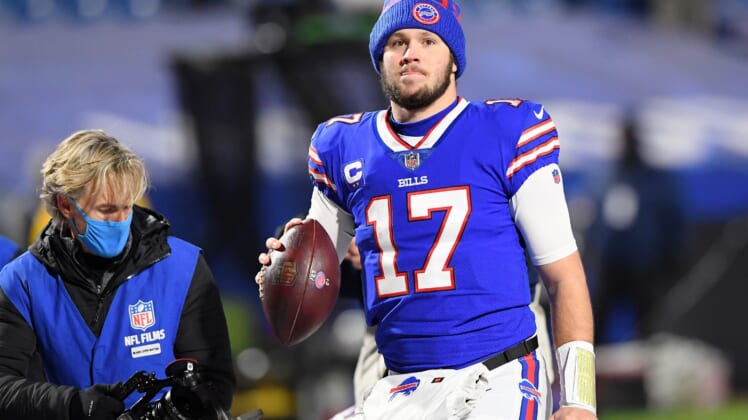 Jan 16, 2021; Orchard Park, New York, USA; Buffalo Bills quarterback Josh Allen (17) walks on the field after their win over the Baltimore Ravens during the second half of an AFC Divisional Round playoff game at Bills Stadium. The Buffalo Bills won 17-3. Mandatory Credit: Rich Barnes-USA TODAY Sports

We’re nearing Championship Sunday in the NFL Playoffs. A lot of the focus will be on the odds and point spreads for each game from a betting perspective.

Can Tom Brady earn a 10th trip to the Super Bowl as he leads his Tampa Bay Buccaneers into Green Bay to take on Aaron Rodgers and the Packers in the NFC Championship Game?

In the later matchup on Sunday, up-and-coming Buffalo Bills quarterback Josh Allen will attempt to lead his team to an upset win over the defending champion Kansas City Chiefs. How might Patrick Mahomes’ status impact the odds in this AFC Championship Game?

We check in on all of that below.

This is a rather interesting matchup with Tom Brady and his Buccaneers having to brave the cold of a Wisconsin winter at Lambeau Field. Green Bay finished with a 7-1 record at home during the regular season, outscoring its opponents by an average of 16 points in those seven victories. Two of those wins came against teams that earned a trip to the postseason.

As for the Brady and Co., they were actually better away from Tampa Bay. Brady threw 21 touchdowns against two interceptions in eight road starts, leading the Buccaneers to a 6-2 record in the process. Remember, he also scored three total touchdowns in last week’s road win over the New Orleans Saints in the NFL Playoffs.

This doesn’t seem to settle a whole lot from a betting perspective. However, the sample size is here for both Brady and Rodgers when it comes to their playoff careers. That’s what we should be focusing on given their statuses as all-time great quarterbacks.

Throughout a vast majority of his two-decades with the Patriots, Brady did most of his postseason damage at home. Focusing solely on road playoff games, the six-time Super Bowl champion posted a 4-4 record away from Gillette Stadium with nine touchdowns against 10 interceptions.

Related: Winners/losers from Packers win over Rams in NFL Playoffs

Aaron Rodgers’ ascension to all-time great status has come in a completely different manner in January. Each of his first four career starts in the NFL Playoffs were on the road. Since then, Rodgers boasts a 5-2 record at Lambeau in the postseason. He’s a mere 2-5 on the road during this very same span. The advantage seems to be in favor of Rodgers and the Packers. That’s the way it should be with them earning home-field advantage throughout the NFL Playoffs.

It is all about the status of reigning Super Bowl MVP Patrick Mahomes after he exited last week’s win over the Cleveland Browns with a head injury. Thus far, things seem to be pointing in the direction of the Chiefs’ star quarterback being able to go in the AFC Championship Game.

That’s no small thing from a betting perspective given that the alternative is career backup Chade Henne. Including the NFL Playoffs, Mahomes has led Kansas City to a 24-1 record in his past 25 starts.

Since the start of last season, Mahomes has also posted a 13-3 record at home with 43 total touchdowns against five interceptions at Arrowhead Stadium. He’s a perfect 3-0 with 11 scores and zero picks in three postseason home games during that very same span. Again, it’s all about the quarterback’s status for the AFC Championship Game.

Related: Winners/losers from Chiefs victory over Browns in NFL Playoffs

As for the Bills, there’s an interesting piece of historical information here. Their last road playoff win came against the Pittsburgh Steelers back in January of 1993. How long ago was that? Bill Clinton would be sworn in for his first term as President 11 days later. Current Bills quarterback Josh Allen wouldn’t be born for another three years.

While it is somewhat rudderless to focus on history from more than a quarter-century ago, history itself does have a way of being repeated.

With that said, Allen and Co. have more than proven themselves on the road this season. He posted a 6-2 record away from Western New York, tallying 23 total touchdowns against four interceptions.

Much like the Brady note above, Allen was actually better on the road than at home. Buffalo also averaged nearly 31 points per game during these road dates. If nothing else, and you’re against betting on the upset here, definitely take the over. I guess, that’s the moral of this story.