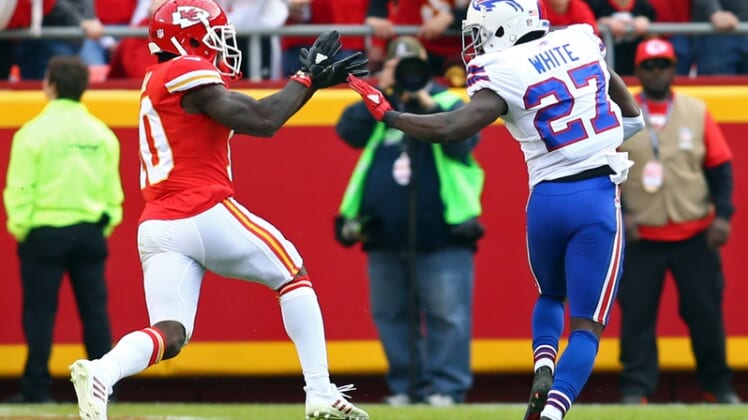 Championship Sunday is almost here with trips to Super Bowl LV on the line in the AFC and NFC Championship games. While plenty of the spotlight falls on the quarterbacks squaring off, these games will be decided by specific head-to-head matchups that could determine the course of NFL history.

Everyone is excited about Aaron Rodgers and Tom Brady kicking off Sunday’s action with their first playoff matchup. As both quarterbacks have said, though, they aren’t actually facing one another. Instead, the likely NFL MVP will face a Buccaneers’ defense that forced four takeaways in the divisional round. Meanwhile, the greatest quarterback in NFL history faces an opponent that has gotten a lot better as of late.

Individual matchups are going to be even more crucial in the AFC Championship Game. We’ll see one of the NFL’s best receivers matched up with a shutdown cornerback. At the same time, an All-Pro tight end should see a lot of attention from one of the most unique linebackers in the NFL.

Let’s dive into the key matchups to focus on throughout Championship Sunday,

If a cornerback makes even the slightest mistake against Tyreek Hill in coverage, he is off to the races. The moment the NFL’s fastest player is given even an inch of separation, he puts his 4.29 40-yard time on display and creates separation like few others. We saw it constantly this season, with eight games of 70-plus receiving yards and a brilliant three-game stretch that saw him rack up 494 receiving yards.

However, Hill’s worst game of the season came against the Buffalo Bills. In that entire game, per Pro Football Focus, Tre’Davious White didn’t see a single pass thrown in his direction on 34 coverage snaps. Unsurprisingly, Hill finished with a season-low 20 receiving yards on three targets.

Patrick Mahomes will certainly try to give his Pro Bowl receiver more opportunities on Sunday. But White is playing stellar football right now, the same level of play we saw in 2019 when he earned All-Pro honors. If we see that same kind of performance in the AFC Championship Game, the Bills might punch their ticket to the Super Bowl.

If you want to contain Tom Brady, make him feel the intensity of pass rushers breathing down his neck and leave him seeing ghosts. He ranked 21st among starting quarterbacks this season with a 54.5 passer rating under pressure and completed just 43.8% of his attempts when under duress. Of course, getting to the future Hall of Famer isn’t easy.

Tristan Wirfs, the No. 13 overall pick in the 2020 NFL Draft, has been one of the best pass-protecting tackles in the NFL this season. While left tackle Donovan Smith is inconsistent, he thrived the past two weeks against some outstanding competition. Now, they’ll both be put to the test on Championship Sunday.

Za’Darius Smith earned second-team All-Pro honors for his phenomenal play in the regular season. He recorded 51 total pressures and 13 sacks, his second consecutive year with 50-plus pressure and double-digit sacks. On the other side, Preston Smith could also make an impact. He looked slow to begin the year, but is playing his best football as of late.

If the Smiths get to Brady early, that could be a wrap for the Buccaneers. We’ve seen TB12 be impacted by pressure, with it influencing his play later in the game. But, if Wirfs and Donovan Smith keep playing at a high level, Brady can move the ball with ease and earn his first trip to the Super Bowl with an NFC team.

When healthy, there isn’t a better NFL player on the planet better than Patrick Mahomes. Unfortunately, he will come into Championship Sunday dealing with a toe injury. It occurred in the divisional round, limiting his ability to throw to his left throughout the game. While he will play in the AFC Championship Game, that toe clearly isn’t at 100% right now.

Buffalo’s defense is also playing much better than we saw earlier in the season. Opposing quarterbacks completed 677% of their passes and posted a 97.7 passer rating with a 12/4 TD/INT ratio in the first eight games. Since then, the Bills have allowed just an 80.9 average quarterback rating, generated eight interceptions and limited passers to a 61.8% completion rate.

Sean McDermott has a brilliant defensive mind and he’ll likely have a solid plan to try and contain Kansas City’s offense. If Mahomes can sit back in a clean pocket and a few deep shots open, either down the sideline or over the middle, he won’t miss. Buffalo certainly has a chance in this one, but will take at least one takeaway to pull this off.

These are the kinds of matchups everyone should really get excited about. An All-Pro defensive back, arguably the best cornerback in the NFL, squaring off against one of the game’s top offensive weapons. Mike Evans brings the size at 6-foot-5, but Alexander has the athleticism, length and instincts to shut down elite receivers.

According to PFF, quarterbacks had a 126.8 passer rating when targeting Evans. He averaged 14.4 yards per catch and finished with 13 touchdowns, another year with phenomenal numbers. On the other end of the spectrum, throwing in Alexander’s direction rarely worked out for opponents. He allowed just a 68.3 passer rating, with only 35 catches allowed on 69 targets across 563 coverage snaps. If Alexander locks up Evans, with Antonio Brown already out, Brady is in trouble.

Travis Kelce made NFL history this season, shattering the single-season record for receiving yards by a tight end (1,413). With so much defensive emphasis placed on stopping Tyreek Hill and trying to find a way to contain Mahomes, Kelce destroyed opponents. He finished with six 100-yard games this season and eclipsed the 90-yard mark in two other games. He is, quite simply, the best at what he does.

But don’t look past Matt Milano. According to PFF, he allowed just a 66.7% reception rate when targeted in coverage this season. This isn’t a one-year fluke, either. Quarterback throwing his way in coverage have just an 83.2 passer rating in the past four seasons, one of the lowest marks against a linebacker over that span.

Just as we highlighted with White, these individuals matchups will be key on Championship Sunday. Taking away the deep shots to Hill and blanketing Hill will go a long way. Mahomes loves his All-Pro weapons and if they are taken away, forcing him to take short throws, he’ll get frustrated.