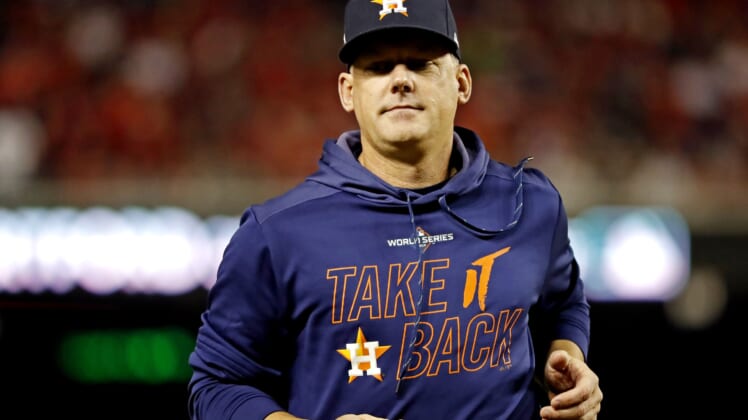 Oct 26, 2019; Washington, DC, USA; Houston Astros manager A.J. Hinch runs back to the dugout after a pitching change during the seventh inning against the Washington Nationals in game four of the 2019 World Series at Nationals Park. Mandatory Credit: Geoff Burke-USA TODAY Sports

The Detroit Tigers head into 2020-’21 MLB offseason looking for changes to help the team take a big step forward, which could include taking a chance on A.J. Hinch or Alex Cora as their next manager.

Following Ron Gardehnhire’s retirement, Tigers’ general manager Al Avila is beginning an extensive search to find the team’s next skipper. Speaking to reporters on Friday, he made it clear Detroit’s list of managerial candidates is extensive and even includes two controversial names.

On his resume alone, Hinch’s accomplishments would make him one of the top managers in MLB. He posted a 481-29 record in the regular season with the Astros, winning a World Series and an AL pennant. However, he is coming off a one-year suspension for his role in the Houston Astros’ cheating scandal.

It’s a similar story for Cora. Beloved in Boston before his role in the electronic sign-stealing scandal was exposed, the Red Sox ultimately fired Cora before the 2020 season. While the cheating tactics hurt his reputation, he posted a 192-132 record in Boston and won the World Series in 2018.

Now, with both available for managerial openings, Avila is keeping his options open. While the search is in its early stages, Cora and Hinch are both in consideration to become the Tigers’ manager.

Both could also be candidates in Boston, with the Red Sox looking to replace Ron Roenicke. While both candidates carry significant baggage and hiring them might cause a PR nightmare, their skills and success as a manager will make them attractive options to multiple teams.

The Tigers would also benefit from adding a younger manager who could potentially be with the organization for years to come. Gardenhire’s days were always numbered as a 62-year-old, but Hinch (46) and Cora (44) likely have decades ahead of them in MLB if allowed to return.

Detroit is a team on the rise, especially coming off a season that saw top pitching prospects Casey Mize and Tarik Skubal make their MLB debuts. Spencer Torkelson, the No. 1 pick in the 2020 MLB Draft, is also on the way with right-handed pitcher Matt Manning also a candidate to debut in 2021.

The Tigers’ future is bright and this offseason will be crucial for this organization to take a huge step forward. Whether that’s taking a risk on a controversial managerial hire or choosing a rising name, like Tampa Bay Rays bench coach Matt Quatraro, the right skipper can make a huge difference.