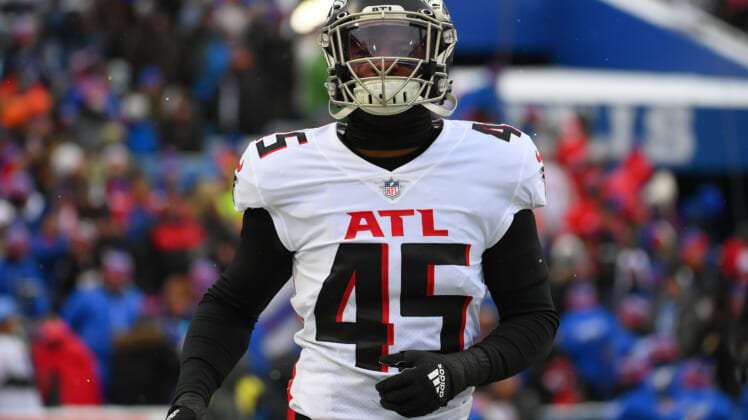 In his first year in the NFL, Atlanta Falcons linebacker Deion Jones became a household name. A second-round pick out of LSU in 2016, Jones finished third in Defensive Rookie of the Year voting after leading the NFL in interception yards and defensive touchdowns, while racking up 108 tackles.

By his second year, Jones made the Pro Bowl, thanks to amassing 138 more tackles, three interceptions, and a sack.

Not only was Jones a tackling machine, but he also became recognized as one of the top coverage linebackers in football. From 2017 to 2019, Jones had an average grade of 82 per Pro Football Focus coverage grades.

After Dan Quinn was fired in 2019, Jones saw his coverage grades drop drastically. In 2020 Jones finished with a coverage grade of 70.6, which was still above average and certainly respectable.

But in 2021, the bottom fell out completely, with Jones finishing with a 33.6 coverage grade. His overall PFF grade wasn’t much better at 34.6. Clearly, this was not the same player we’d seen during his first four to five seasons in the league, and at age 27, it’s unlikely his athletic abilities suddenly fell off the map.

So what’s the explanation for his suddenly poor play?

It was reported late in the season that Jones was experiencing shoulder issues, which caused him to miss Week 12. It’s possible those shoulder issues were worse than initially believed, as Jones is still battling the injury.

As Falcons head coach Arthur Smith announced on Thursday, Jones is expected to miss the rest of the offseason as he rehabs from shoulder surgery.

Yet, his recent struggles on the field may lead the Falcons to move on from Jones altogether.

No one expects the Falcons to make the playoffs this season, and it’s possible the team would prefer to part ways with Jones as they embark on their rebuild.

With Mykal Walker seemingly ready to step into a bigger role, along with new draftee Troy Andersen and free agent signee Rashaan Evans, it appears the Falcons have already planned for life after Jones.

So why not move on from Jones, saving some money in the short term, while seeing what their other pieces can do?

Here are three ideal landing spots for Deion Jones, should the team decide to cut or trade him. Keep in mind, teams may not be inclined to trade for a player who may very well be released anyway.

As mentioned above, Deion Jones was at his best under coach Dan Quinn, and now that he’s coordinating the Dallas defense, it’s possible the two will look to rekindle their old relationship. If Jones signed with the Cowboys, there would be less immediate pressure to get him on the field right away, allowing him to get back to 100% in the hopes he could become a contributor late in the season.

The Cowboys still have Leighton Vander Esch, whose play has also slipped as of late, and having Jones around might create a friendly competition between the two, bringing out their very best. Jones would be closer to his Louisiana birthplace and would once again have a coach who fully believes in his abilities.

If Jones feels he’ll be ready to play sooner than later, maybe the New York Jets make the most sense. C.J. Mosley hasn’t looked like the Pro Bowl player we saw in Baltimore, and he could be on his last chance to make an impression in the Big Apple. Having Jones on hand gives coach Robert Saleh another experienced body to rotate in should Mosley continue to struggle.

Jones might even be able to quickly reclaim the starter role he’s grown accustomed to since 2016. With the Jets’ linebacking corps in shambles, they could do a lot worse than bringing in a player who was once among the best at his position, maybe with coach Saleh’s assistance, he can return to top form.

Deion Jones heads back to NOLA

The place Deion Jones may want to be most, is with the New Orleans Saints. It would continue the homecoming offseason they’ve enjoyed, bringing in fellow Louisiana natives with Tyrann Mathieu and Jarvis Landry coming aboard, and add a capable middle linebacker to pair with Demario Davis.

2021 second-round pick Pete Werner didn’t inspire anyone with his coverage abilities as a rookie, and having Jones on hand could present more unique sub-package options to keep offenses on their toes.

Not to mention, for Jones, the chance to face his old team twice per season in the NFC South has to be enticing, especially when that means heading back home.