The Dallas Cowboys are the current home of one of the most explosive and promising young defenders in the NFL. We’re talking about linebacker Micah Parsons. It’ll only be his second year as a professional, but there’s already chatter about him being an NFL Defensive Player of the Year candidate.

Parsons has joined the upper echelon of NFL pass rushers right from the outset. As the 12th overall pick in the 2021 NFL Draft, Parsons exceeded expectations after falling out of the top 10. Being in the running for such a prestigious accolade isn’t far-fetched. In fact, there are a few reasons why he’ll likely be in the conversation this upcoming season.

As a rookie, Parsons showed off plenty of athletic ability and put the rest of the league on notice. Whenever he was used as a defensive end off the edge, the results spoke for themselves. He recorded 4.5, six tackles for a loss, 13 QB hits total. That was based on Parsons playing the position full time in four games.

However, the former Penn State Nittany Lion won’t be limited to just a singular role. That’s what makes him such a special talent. It’s his ability to get to the quarterback from virtually any position, whether it be the WILL linebacker slot or on the defensive line.

As stated before, even though a full-time move to the edge is unlikely, Parsons made the most of his snaps at that slot. According to NFL Next Gen Stats, Parsons caused seven pressures and led the NFL with a 19% pressure rate at one point, which was based on at least 100 pass rush attempts. Looking at such a small sample size, Parsons will likely build on his sack total from last year (13) and that could propel him to another level. 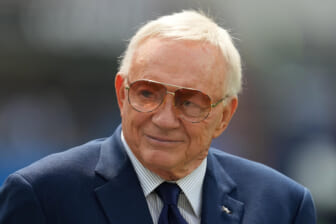 Parsons was recently listed by Pro Football Focus as one of the top seven players in a position to be in the running for DPOY. One disadvantage, arguably, is that some of the players ranked above Parsons are strictly pass rushers. They have one job; get to the quarterback. Parsons has more than just one duty as he needs to be able to cover everything, which he did a solid job of in 2022. Per PFF, he was graded 69.4 in the coverage department for his efforts.

A closer look at his productivity reveals that when Parsons was picked on in coverage, he usually held his own. Pro Football Reference shows that Parsons was targeted 36 times, surrendering 22 completions for a total of 160 yards. Regardless, the linebacker can make plays in coverage as well, totaling three forced fumbles and three pass deflections. Simply put, he’s a playmaker and, barring an unforeseen development, that will continue in 2022.

Another reason that Parsons could end up topping last year’s numbers and earning serious recognition will be the addition of second-round pick, Sam Williams. The edge rusher from Ole Miss was a steal in the second round because of his upside and raw athletic ability.

Williams is a physical freak that recorded eye-popping numbers in college, totaling 12.5 sacks and 15 tackles for a loss. He has notable explosiveness and bursts through the line of scrimmage on film. Pairing him with Parsons is going to give NFC East quarterbacks nightmares before game day.

Defensive coordinator Dan Quinn can line up Micah Parsons behind Williams (assuming he’ll be the right defensive end) and that could lead to an explosive pass rushing attack. Look for Parsons to pile up plenty of sacks.