As NFL teams prepare for the start of training camps later this month, they are certainly going to be checking around the free agent market to see who might be able to help them moving forward.

The past month-plus has been pretty quiet on this front. Don’t expect that to remain the case moving forward. From a former Pro Bowl receiver in Dez Bryant to a future Hall of Fame running back, there’s some notable free agents available heading into camp. We take a look at some of them here. 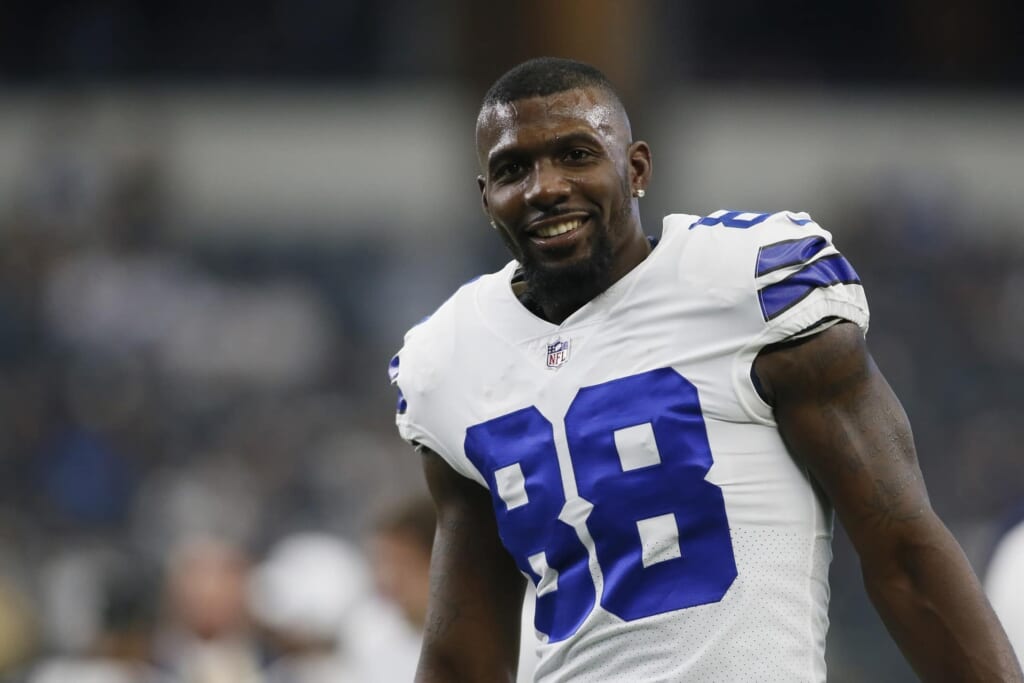 Released by the Cowboys back in April, it’s somewhat shocking to see Bryant still on the open market. At 29 years old, the former Pro Bowler seemingly has a lot left in the tank. Despite this, he’s coming off a disastrous two-year stretch with the Cowboys that saw him average just 60 receptions for 817 yards.

With NFL teams acquiring a better understanding of where their rosters stand heading into training camp, we fully expect Bryant to sign here soon. Among the teams he’s been linked to, the San Francisco 49ers are reportedly prohibited favorites. That would certainly be an interesting match with Jimmy Garoppolo tossing the rock in Northern California. It would also fulfill Bryant’s wish of playing with a Cowboys rival.

Hankins was among the best interior defensive linemen in the entire NFL last season. In his first and only year with Indianapolis, the 320-pound behemoth recorded 44 tackles and two sacks. Pro Football Focus also graded him out as the third-best run-stuffing defensive tackle in the game. Surprisingly, Hankins was released by the Colts because they didn’t see him as a scheme fit under new defensive coordinator Matt Eberflus.

There’s no reason to believe that teams who run a 3-4 defensive scheme won’t show interest in Hankins moving forward this summer. He is limited in what he can do from a scheme standpoint. Even then, last year’s production speaks for itself.

Having started all 39 games in which he’s appeared over the past three seasons, Pacman provides experience that a ton of teams will end up coveting during camp. Given that he’s still a plus level return man, that’s magnified even further. He’s the perfect late summer addition for a contending team in need of depth in the secondary and on special teams.

Common logic seems to suggest that Cincinnati will entertain the idea of re-signing Jones when all is said and done. Though, he’s also received interest from a New York Giants squad that’s razor thin at cornerback. It will certainly be an interesting dynamic to check in on once camps get going later this month. 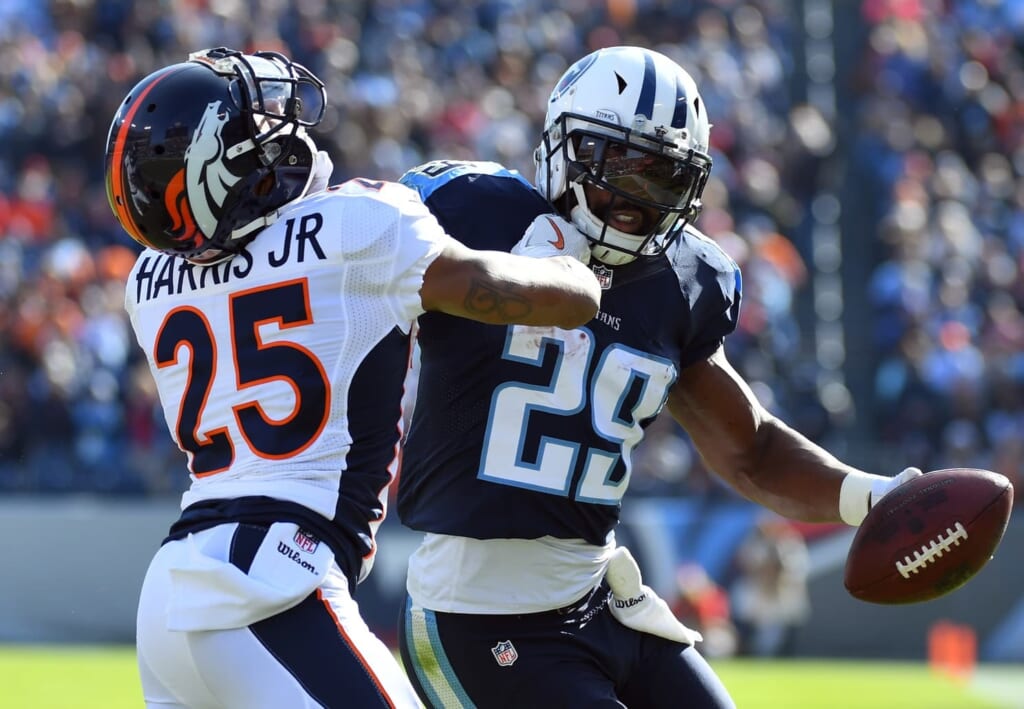 One year removed from putting up 1,664 total yards and earning a Pro Bowl nod with Tennessee, the market for this former NFL Offensive Player of the Year just hasn’t been there. It’s understandable given that Murray will turn 31 this coming season. That’s about the age running backs tend to hit a wall.

Even then, it’s not like Murray hit said wall last season. He still recorded over 900 total yards and caught 83 percent of the balls thrown in his direction. Murray has also received interest from multiple teams in free agency. Expect that to continue once summer camps get going. He might not be a three-down back, but the veteran can provide a lift in the backfield. That’s for sure.

There’s some questions about whether Cutler himself is officially retired. Certainly, it seems that he’s headed in that direction after an average season in South Beach. But with Cutler, we can never be too sure. Remember, he retired last offseason to join the Fox broadcast booth, only to return to the NFL as a replacement for the injured Ryan Tannehill.

Who is to say Cutler wouldn’t jump at the opportunity to sign with a team should a starter go down during the summer? Coming off a 2017 campaign in which he surprised to the tune of 19 touchdowns and 14 picks, interest will definitely be there from teams around the NFL. 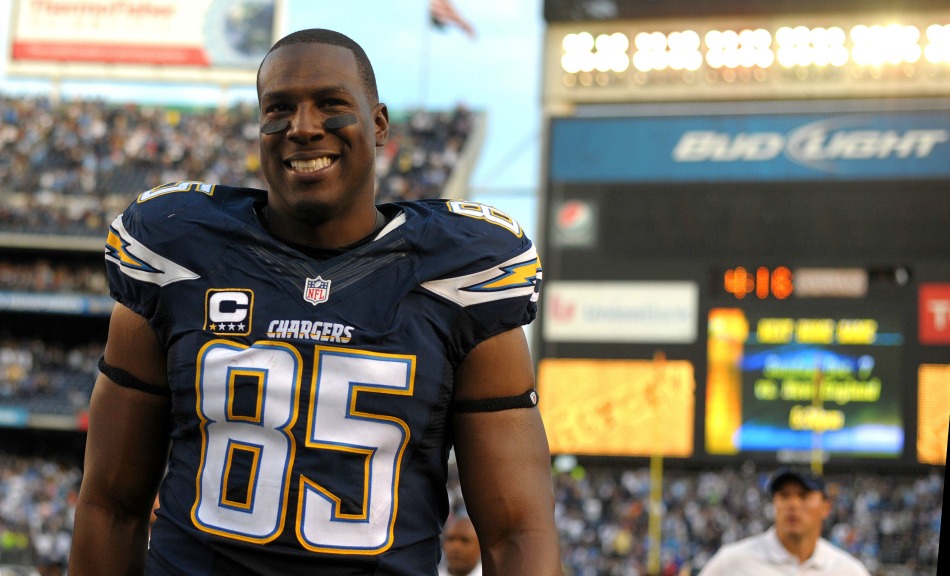 There’s a decent chance that Gates returns to Los Angeles after initially being told that the team had no interest in retaining him. Obviously, the season-ending injury to starting tight end Hunter Henry has played a role in this. It makes a ton of sense. Having suited up for the Chargers throughout his 15-year NFL career, it would be weird watching this future Hall of Fame tight end play on another team.

Gates, 38, is in the back end of his career. He recorded just 30 receptions for 316 yards and three touchdowns last season. It was the worst performance of the eight-time Pro Bowler’s career since his rookie campaign. Even then, he’s an intriguing name to keep an eye on moving forward.

Much like with Cutler, we have no real idea if Cushing is officially retired. It was reported earlier in the offseason that he had called quits on his career. Almost immediately after that, Cushing was slated for a free agent meeting with the Oakland Raiders. While nothing came to fruition on that front, it wouldn’t be a shock if he attempted to latch on with a team this summer.

A former NFL Defensive Rookie of the Year, Cushing’s career has been in a downward spiral due to numerous injuries and multiple suspensions since. This doesn’t mean that he’s not a valuable contributor when on the field. From 2014-16, the former USC standout started all 43 games in which he appeared, recording 247 tackles, six passes defended and two forced fumbles during that span.

When New Orleans signed Fleener to a five-year, $36 million contract back in March of 2016, the team expected him to play a huge role with Drew Brees tossing the tight end the rock. That never came to fruition. In two seasons with the Saints, Fleener recorded just 72 receptions for 926 yards. Talk about not getting any bang for your buck.

Since released, Fleener has not drawn a ton of interest on the open market. That could very well change with training camp getting going and if his concussion issues are proven to be behind him. Still just 29 years old and boasting previous success with the Indianapolis Colts (103 receptions, 1,382 yards and 12 scores in 2013-14), we expect some team to take a chance on him.

Mitchell was clearly upset with Pittsburgh’s decision to move on from him after four seasons. But as we’ve seen with other players at his position, it’s certainly been a cold market for safeties. Given Mitchell’s advanced age (31) and struggles in coverage, it’s no surprise that he remains unsigned.

Should the nine-year NFL veteran decide that he’s okay with switching to strong safety, there’s a darn good chance he’ll be signed here soon. He’s still a vicious hitter and can be an imposing figure in a secondary with a true free safety. That’s where Mitchell’s value will be moving forward. 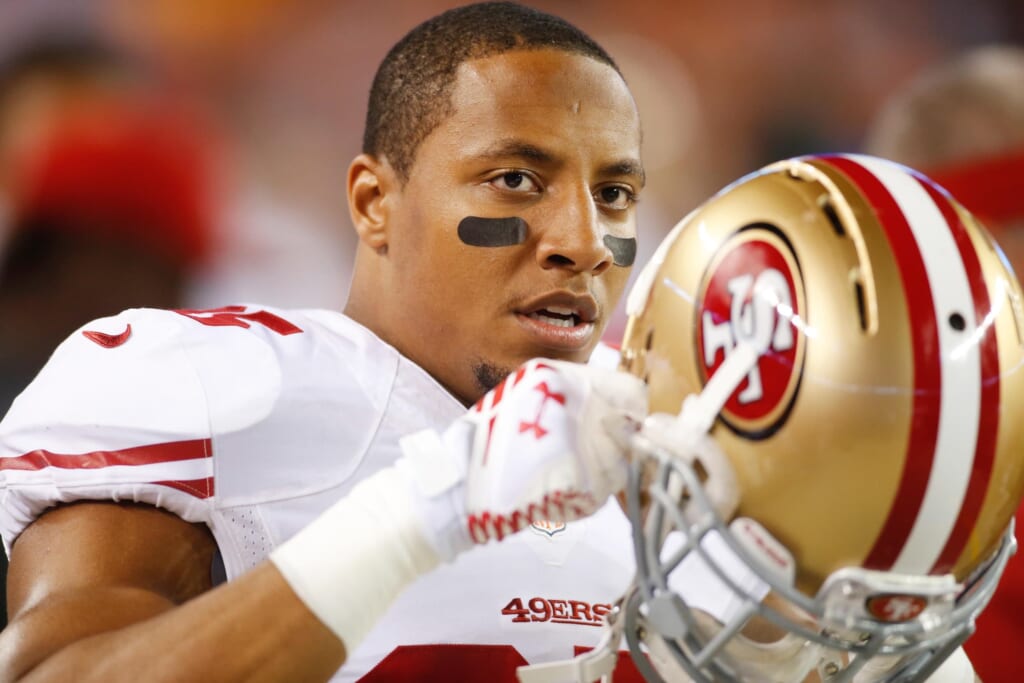 Much like his former teammate, Colin Kaepernick, the primary reason for Reid’s unemployment is the national anthem protests he took part in. Realistically, there’s no other way to explain why the former Pro Bowler is unsigned at this point in the summer. A former first-round pick of the 49ers back in 2013, Reid is coming off a 2017 campaign in which he recorded 66 tackles and four passes defended while playing four different positions.

It’s this type of versatility that should intrigue teams moving forward. Reid can play both safety positions and showed himself well playing linebacker at times last season. If an organization can get over his politics, this former Pro Bowler would certainly be a good get.

Is Peterson in the back end of his career? Certainly. Is he completely washed? We’re not entirely too sure. The future Hall of Famer has played a grand total of 10 games over the past two seasons, recording 601 yards in the process. He’s also 33 years old and has north of 2,800 touches under his belt.

In no way does this mean Peterson can’t provide something of substance for a contending team. During a three-game stretch with the Cardinals prior to suffering a neck injury last season, he recorded 313 yards. That might be enough for one of the game’s greatest running backs to get another shot.

At 31 years old, Decker is well removed from his prime. His last solid contribution came as a member of the New York Jets back in 2015 when the eight-year vet recorded 1,027 yards and 12 touchdowns. But as we have seen with other slot receivers in the past, career longevity could be the name of the game here.

Decker is still someone who can provide a consistent target underneath. Last year with the Titans, he recorded 54 receptions and put up a team beast 65.1 percent catch rate. That’s certainly going to be intriguing to contending teams heading into camp.