Whether preparing to cook, play a game or ace an interview, it’s always best to devise an intended plan of action but be ready to adjust. NFL free agency is no different.

A handful of teams are interested in adding quarterback Kirk Cousins, but only one franchise will secure him. Until he’s signed elsewhere, front offices will focus on their top choice. That’s why Cousins is the biggest domino of the offseason.

But there are several free agents poised to have a substantial impact on the hectic stretch of negotiations. Once these key names are secured, it’ll be a scramble to attract the remaining players.

The Arizona Cardinals, Denver Broncos, Minnesota Vikings and New York Jets all need a quarterback. They all want Kirk Cousins. Although league insiders and teams themselves feel Minnesota is the most likely destination at this point, the Broncos are invested in chasing the veteran. Plus, the Jets have enough room on the salary sheet to offer Cousins an annual salary around $30 million and guarantee several years of the contract. When he’s officially off the market, most of these teams will shift their attention to Case Keenum.

Thanks to an impressive season with the Vikings, the 30-year-old is due for a considerable raise. Keenum completed 67.6 percent of his passes for 3,547 yards and 22 touchdowns to only seven interceptions. That performance has made him the clear prize behind Cousins. While the Jets probably aren’t a player in the chase for the Houston product, whichever two of the Cardinals, Broncos and Vikings remain involved after Cousins will pursue Keenum. His eventual decision will leave one last marquee free agent at the position. 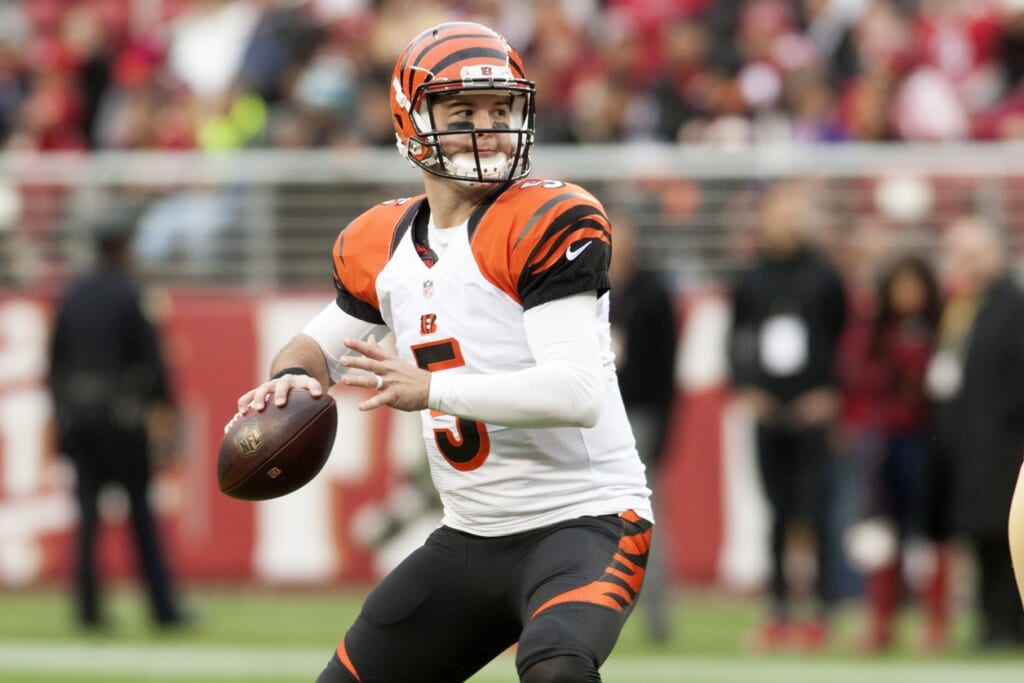 Regardless of whether we believe AJ McCarron merits the attention, it seems he’s the No. 3 option in free agency despite having little experience as a starter. Though the Browns were expected to heavily pursue him, the addition of Tyrod Taylor now appears to close that possibility. Nevertheless, as soon as McCarron is signed, the remaining quarterback-needy teams — perhaps the Buffalo Bills, Cardinals and Jets — will shift their focus to the NFL draft and/or the third tier. That includes Teddy Bridgewater, Sam Bradford and Josh McCown.

After effectively missing the entire 2017 campaign due to a knee injury, Allen Robinson is the premier wideout on the market. He collected 80 catches for 1,400 yards and 14 touchdowns in 2015, then totaled 883 yards and six scores the next season. Heading into his age-25 season, Robinson could be a fixture of a team’s receiving corps for a half-decade. Provided his medical checks are satisfactory, the Penn State product should field several high-dollar offers because of that potential plus a thin group at the position.

Over the last two years, Sammy Watkins has flashed his enormous potential yet only built a decent free-agent case. He managed 28 catches and 430 yards in a half-season of work for the Buffalo Bills in 2016 before providing 39 receptions, 593 yards and eight touchdowns with the Los Angeles Rams last year. Also entering his age-25 campaign, Watkins is still young enough that his talent outweighs concern about production. That’s what separates him from a group of non-star contributors in Paul Richardson, Albert Wilson and Donte Moncrief. 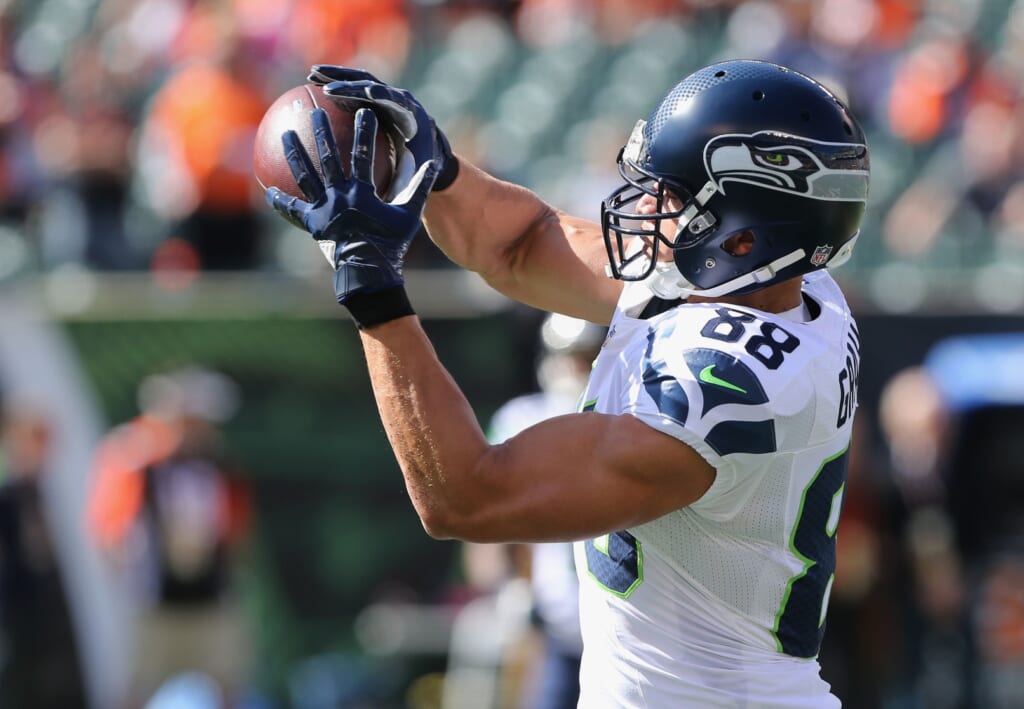 The Seattle Seahawks were a poor fit for Jimmy Graham, but he still attracted a pace of 90-plus targets in all three seasons. Most importantly for his value, Graham reemerged as a dominant red-zone option in 2017. All 10 of his touchdowns happened inside the opponent’s 20-yard line. Every team wants that type of efficiency, and Graham is unique among his free-agent peers in that regard. Tyler Eifert has similar top-end potential but comes with a serious injury risk, and Trey Burton is unproven as a starter.

Finding a franchise quarterback is priority No. 1. Once a team acquires that caliber of player, the chief goal turns to protecting him. For the last seven years, Nate Solder has blocked for Tom Brady — the NFL’s most accomplished quarterback of all time. But the New England Patriots might not be able to afford Solder. While not the best lineman on the market, he’s undoubtedly the top tackle. Front offices will be fighting for his signature before moving on to Justin Pugh, Cameron Fleming and Chris Hubbard.

Ryan Jensen finally became a full-time starter in 2017, and he didn’t disappoint. As a result, the soon-to-be 27-year-old can demand a long-term contract. But his draw isn’t totally based on performance; rather, the other free-agent centers either have injury or age concerns. Concussions have limited both Weston Richburg and Travis Swanson, and Spencer Long dealt with knee injuries last season. Additionally, John Sullivan turns 33 in August. They’ll all be waiting to see where Jensen signs, since Andrew Norwell is reportedly off the table. 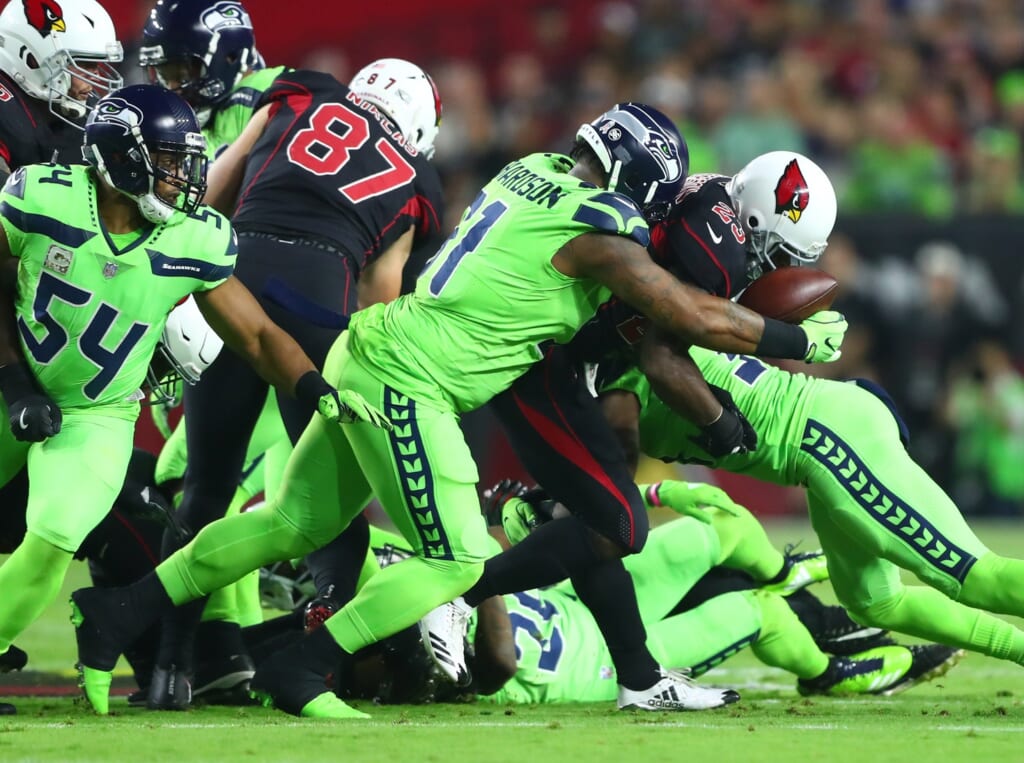 Seattle elected not to slap the franchise tag on Sheldon Richardson, so the intriguing 27-year-old will be an unrestricted free agent. It’s possible he decides to stay with the Seahawks, but Richardson will probably set the market. His combination of top-end potential and versatility are unmatched in the class, even though his sack numbers have dropped in recent years. Part of that issue is a result of how the Jets deployed Richardson, so the hope is that effect lingered in Seattle but can be overcome in the future. He’ll certainly be paid like it, anyway.

He’s probably not going to headline a defensive front, but Star Lotutelei sure can finalize a great one. The 6’2″, 315-pounder demands extra attention in the middle, plugs running lanes and creates opportunities for linebackers to fill gaps. Those contributions are not reflected on the stat sheet but are just as important. While his performance dipped slightly in 2017, he’s a reliable starter who has a higher ceiling than Dontari Poe. And at 28 years old, Lotulelei’s youth is a draw over Kyle Williams and Haloti Ngata.

After spending six seasons with the Rams organization, a pair of trades bringing Marcus Peters and Aqib Talib to Los Angeles signal the end of Trumaine Johnson’s tenure. And there won’t be a shortage of interest for the 28-year-old. During the last three seasons, he racked up 193 tackles, 42 pass defenses and 10 interceptions. Now that former Seattle Seahawks star Richard Sherman is going to the San Francisco 49ers, Johnson is the highest-regarded corner. The veteran is close to securing his first massive payday.

Getting benched in Super Bowl LII is both fresh and something that may affect the perception of Malcolm Butler, but he’s a definite starter elsewhere. The 28-year-old should have a wide range of suitors, including the Houston Texans, Seahawks, Jets Indianapolis Colts and Tampa Bay Buccaneers, among others. Butler posted 44 pass defenses and eight interceptions over the last three seasons. Front offices will be focused on Johnson and Butler before looking at Kyle Fuller, E.J. Gaines, Bashaud Breeland, Morris Claiborne and Rashaan Melvin.