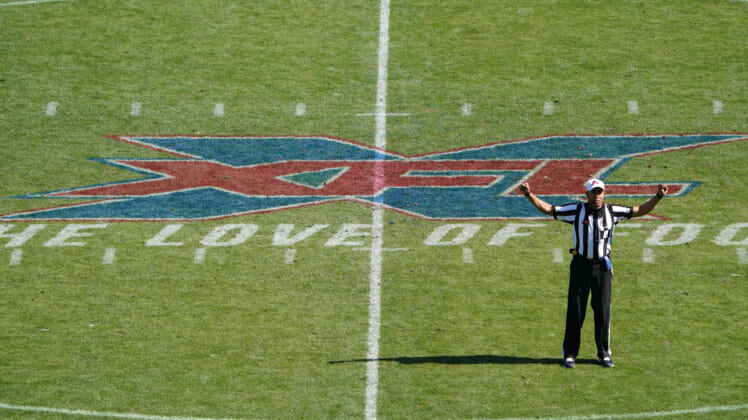 The XFL is returning in 2023 with Dwayne Johnson bringing the spring football league back in a matter of months. While there is plenty more information set to be announced regarding the 2023 XFL season, we do know about the coaches and teams who will be taking part.

It’s been a long road towards this happening. The XFL originally relaunched in 2020 but its first season back was shut down by the COVID-19 pandemic. Soon after, the league filed for bankruptcy and was purchased by a group led by Dwayne “The Rock” Johnson, Dany Garcia and RedBird Capital.

League officials initially planned to hold a 2022 season, but it later announced a delay thanks to the desire to be in a better position to launch next year. The wheels are now in motion towards the 2023 XFL season, with everything coming together to make the new spring football league happen.

Here’s everything you need to know so far about the people and teams involved in the 2023 XFL season.

While the XFL teams haven’t officially been announced, with that official news coming later this summer, we do have some idea of where the eight teams will be located.

Dallas mayor Eric Johnson won’t get his wish for a second NFL team in the city, which makes Jerry Jones happy. However, Dallas will host an XFL team in 2023. While a team name hasn’t been announced, the coaching staff is already being assembled. They could reclaim the Dallas Renegades name, which played at Choctaw Stadium.

Once the home of the Houston Roughnecks, football fans in one of the largest cities in Texas will get their own football team this spring. The team will likely stick by its name as the Roughnecks, which remains owned by the XFL, and could play at TDECU Stadium next year.

San Antonio, Texas has wanted an NFL team for years. They likely aren’t on the radar with NFL expansion years away from happening. However, football lovers will get a taste of the sport with the XFL heading to Houston for the 2023 season.

Already home to the Las Vegas Raiders, spring football is now headed to Sin City. This won’t be the first time Las Vegas partners with the XFL, going back to the Las Vegas Outlaws in the original XFL. It’s unclear where this team will be playing its home games.

Seattle showed strong support for the Dragons in 2020 and the league is returning to Washington. It’s undetermined if Lumen Field will be used as their home site, but it seems like a realistic option.

The St. Louis Battlehawks drew huge crowds in 2020, with football fans in Missouri proving they can support a team when it commits to them. St. Louis. The Dome has reportedly reserved five dates for spring 2023, a strong sign there will be pro football in St. Louis.

The DC Defenders were a popular team and the city can once again take pride in a football team. It’s very possible the name is reclaimed, which could prove to be a popular decision. Either way, Washington, D.C. should have a pro football team worth rooting for in 2023.

While we are months away from a draft and finding out what players will be involved, here are the XFL coaches, per Pro Football Network.

The legendary coach and defensive guru finally returns to the sidelines. Phillips, who will be 75 at kickoff next year, last coached in 2009 as the Los Angeles Rams’ defensive coordinator. It’s a fitting landing spot for the Texas native, especially since he worked as an NFL coach in Houston with the Oilers (1976-’80) and Texans (2011-’13). This time around, he likely won’t be able to coach alongside his son as Wes Phillips is the Minnesota Vikings’ offensive coordinator.

The Oklahoma Sooners coaching legend and college football icon is returning to Texas. Afer overseeing the Sooners’ football dynasty (1999-2016), Stoops took over as the Dallas Renegades coach in 2020. He later returned to Oklahoma to serve as interim coach when Lincoln Riley left for USC.

After an outstanding career with the Pittsburgh Steelers, the former NFL wide receiver is now making a smooth transition into coaching. He first served as an offensive assistant with the New York Jets (2019-’20) and most recently coached wide receivers at Florida Atlantic under Willie Taggart. The 46-year-old now gets to coach San Antonio’s team.

In a rare instance of coach poaching, the XFL pulled Reggie Barlow away from Virginia State. The 50-year-old Alabama native will take over Washington, D.C’s franchise with the goal of enjoying the same success he found at the college level (83-58 record).

The former NFL assistant coach is getting another shot to serve as the head man for a team. Jim Haslett last served as inside linebackers coach for the Tennessee Titans (2020-’21), before that serving in the same role for the Cincinnati Bengals (2016-’18). He brings decades of coaching experience, serving in a variety of roles including as head coach. June Jones will serve as Seattle’s offensive coordinator.

Former player and position coach Terrell Buckley is finally getting his shot in the big chair. The fifth pick in the 1992 NFL Draft, the Florida State alum and 1991 Jim Thorpe Award winner will take his years of experience leading a secondary to the sideline as Orlando’s head coach.

One of the best players in his era, a member of both the Pro Football Hall of Fame and College Football Hall of Fame now gets his dream job. Woodson last coached cornerbacks in 2017 with the Oakland Raiders, before that serving as an assistant on the staff. This will prove to be a huge opportunity for the 57-year-old and on a huge stage.

Anthony Becht heads to St. Louis with a limited resume compared to his peers. A first-round pick in the 2000 NFL Draft, the former tight end is one of the younger coaches in the new league. The only coaching experience on his resume is a stint as tight ends coach for the San Diego Fleet of the AAF in 2019.

When does the XFL start?

The 2023 XFL season will kick off on February 18, 2023 with the first game of regular season broadcasted on ESPN.

How to watch XFL games

TV contracts are already in place with the 2023 XFL season scheduled to air on ABC, ESPN, Disney+ and FX in 2023. More information about the game broadcasts and where to watch them can be found here. The league will run opposite of the USFL, broadcasted on Fox, NBC, USA Network and Peacock.