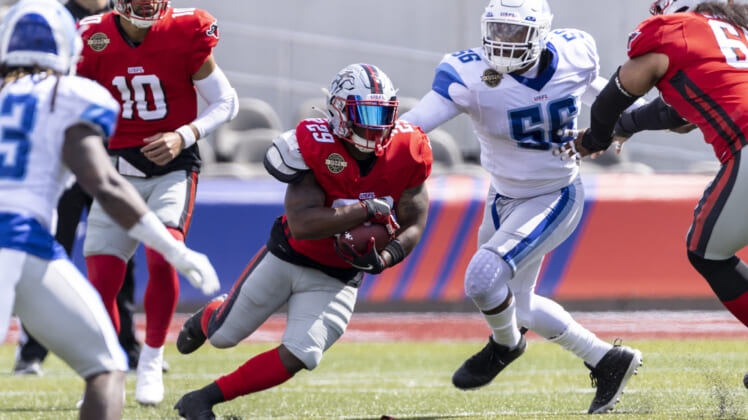 The United States Football League launched its inaugural season in 2022, partnering with Fox and NBC to broadcast spring football. It’s another effort to tap into the market for football during the NFL’s downtime. The latest USFL TV ratings will provide a look at how the league is faring.

Plenty of things are being done in an effort to make spring football more entertaining. the USFL is using drones and helmet cameras to provide unique camera angles for viewers. Additionally, the league includes live audio from coaches’ communications and there are a few relatively known players and coaches in the USFL.

The 2022 UFL season comes two years after the XFL ceased operations midway through its first season due to the COVID-19 pandemic. Prior to that, the Alliance of American Football lasted for a few weeks in 2019 before it folded and went bankrupt.

After experiencing some positive growth with the ratings and average viewing audience in Week 4, USFL Week 5 delivered some troubling numbers. Even with three of the four games broadcasted on major networks (Fox and NBC), the final numbers came out worse than expected.

There’s another factor to keep in mind moving forward. This is a crucial season for the USFL that is all about building a TV audience, attendance at games was never a priority and it’s getting worse. However, the XFL is launching in 2023 and is already partnered with ESPN. It’s very unlikely that two spring football leagues can survive simultaneously and that’s even assuming one makes it to 2024.

While the USFL is still competing against the NBA Playoffs, things are looking a bit better for the league as the 2022 season progresses and viewership holds steady. While Week 4 wasn’t the most exciting slate, it proved to be worthwhile for the league’s TV partners.

Here are the USFL. TV ratings for Week 4.

While there is a dip in viewership for the game on Fox Sports 1, Fox saw its viewership hold steady and NBC will surely walk away fairly pleased with its 1.159 million average viewers. For comparison, NBC’s coverage of the Chicago White Sox vs Boston Red Sox game on Sunday morning (11:30 AM EST) drew 1.295 million viewers

When the USFL launched in the spring, it knew the time would come when it had to compete against the NFL Draft. While plenty of hardcore football fans tuned in to see who their teams would select in Rounds 4-7, the USFL still fared decently with its Week 3 slate. While the afternoon game didn’t crack 1 million, the Saturday night game did.

The average total viewers marked an increase from the Saturday night USFL broadcast a week earlier on FOX, a meeting between the Philadelphia Stars and Pittsburgh Maulers that drew 1.056 million average viewers for the network.

As for the second Sunday USFL game between the New Jersey Generals vs Philadelphia Stars, it aired on Peacock and ratings were not made available.

Week two in the USFL offered a couple of high-scoring shootouts on Saturday, April 24, sandwiched in between a pair of less exciting outings from the league’s teams on Friday and Sunday. In the game of the week, the Birmingham Stallions moved to 2-0 with a 33-28 win over the Houston Gamblers. While on the same day, interstate rivals the Pittsburgh Maulers and Philadelphia Star duked it out in a closely contested 30-23 game won by the Stars.

The high offensive output actually led to some solid TV ratings for the league on Saturday. The Maulers vs Stars game earned 1.056 million viewers on Fox. Those numbers, combined with the USFL’s other games this weekend were actually better than Premier League coverage on NBC and NHL action on ABC this past weekend.

The Sunday, April 25 afternoon matchup between the New Orleans Breakers and Tampa Bay Bandits only pulled in 812,000 for NBC. While the Saturday action offered decent numbers, it was still the peak of viewers for the league over the second week of the season.

The 2022 USFL season kicked off on Saturday, April 16 with a matchup between the Birmingham Stallions and New Jersey Generals. It turned into a captivating game with big plays early and it came down to the wire with a game-winning touchdown in the final seconds.

This game also marked a rare moment for sports television. For the first time since 2007 – when CBS and NBC broadcasted a Week 17 contest between the New England Patriots and New York Giants – two major TV networks televised the same sporting event. Because of the split distribution, Fox and NBC split the USFL TV ratings.

According to Programming Insider, the Stallions vs Generals game averaged 2.95 million viewers with a 0.4 rating in the 18-49 demographic. NBC came out slightly ahead in terms of total viewership, but each network received a 0.4 rating.

It’s important to put those numbers in context against competition from other pro sports. According to Sports Media Watch, the largest audience for the 2022 NBA Play-in Tournament came on Thursday, April 14 when TNT averaged 2.7 million viewers for an elimination game between the Los Angeles Clippers vs Minnesota Timberwolves. Meanwhile, the play-in game matchup between the Cleveland Cavaliers vs Brooklyn Nets averaged 2.48 million viewers. 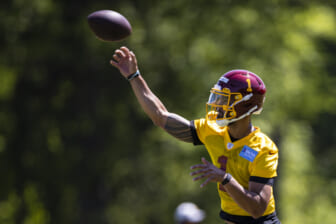 Collectively, the USFL’s kickoff game performed better and seemingly shows potential for a market in the spring for live football. However, the ratings being split across two networks and a comparison to the CFL isn’t favorable for the USFL.

While the USFL Week 1 ratings were touted by the league, there is a different issue regarding interest in spring football. According to WBRC 6, the USFL distributed approximately 40,000 tickets for its opening game with the hope fans would come in droves for some live football in April.

Instead, roughly 17,500 people showed up to watch the game in person. It was apparent during the broadcast with cameras angles catching sections of open seating and gaps in aisles between spectators. Competitive games helped keep fans inside the stadium, but that only lasts for so long.

In the Week 1 Sunday doubleheader, things looked even worse with huge portions of the stands just vacant chairs. On the opening weekend, the USFL’s popularity in its host city doesn’t seem to be there right now.

Needless to say, there’s a lot of work to be done. The USFL ratings were acceptable for an opening weekend, but they ended up dipping, unfortunately. If it isn’t balanced with improving attendance, that spells trouble considering what happened to the AAF and XFL as we explain further.

Viewership is always high when a pro league debuts. We’ve seen that on full display with the XFL, AAF and it’s very likely the USFL fits into that category.

The XFL kicked off its 2020 season days after the Super Bowl, wanting to take advantage of fans still hungry for more football. It received strong ratings in its debut with 3.3 million viewers tuning in for the kickoff game on ABC, per Pro Football Talk.

While the AAF didn’t have as much fanfare as the XFL, given it was a startup without a brand name people recognized, it performed well in 2019. The AAF kickoff game drew 2.9 million viewers for CBS in February 2019. In both instances, like with the USFL ratings, it competed with the NBA.

Unfortunately, these leagues often see a dip in viewership after the first weeks. Many fans check it out and with players they don’t recognize competing with teams they have no connection with, it becomes an easy decision to turn off the game and wait elsewhere.

In Week 5 of the XFL season, ratings dipped below 1 million average viewers. It proved to be the final games for the league thanks to the COVID-19 pandemic.

As for the AAF, which partnered with CBS Sports Network and NFL Network after Week 1, ratings steadily plummeted before the league folded.

Fox is invested in the USFL right now, which provides the network with an incentive to keep the league going. There is also a heavier dependency on the television audience because all eight USFL teams are playing in Birmingham, Alabama. With crowd sizes likely to decline, USFL TV ratings need to be high for the league to survive. We’ll see if they find a way to avoid the audience dip that sunk those before them.