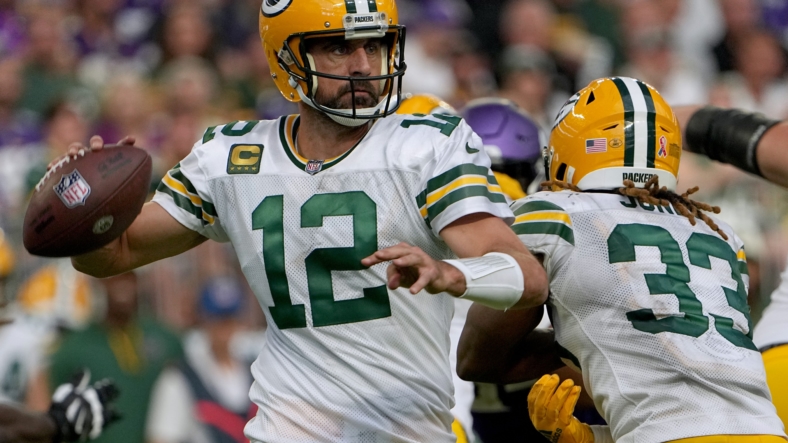 The Green Bay Packers are making a habit of starting slowly in the regular season under Matt LaFleur. In three of Green Bay’s four Week 1 games under LaFleur, they have put up 10 points or less. LaFleur is 2-2 with Green Bay in Week 1 and 37-9 outside of that first week.

Now, it obviously starts and ends with signal-caller Aaron Rodgers. He would be the first person to tell you he could have played better. However, the team’s loss in Minnesota on Sunday was not his fault. One of his key rookie receivers in Christian Watson dropped a would-be 75-yard touchdown on the first offensive play for Green Bay.

The defense allowed Vikings All-Pro receiver Justin Jefferson to run wild on them (9 receptions for 184 yards and 2 touchdowns). It is also important to note that Rodgers didn’t have his No. 1 receiver in Allen Lazard and both of his tackles in All-Pro David Bakhtiari and Pro-Bowler Elgton Jenkins. All three were inactive. In other words, No. 12 was running for his life and he didn’t have his most important receiving option.

Despite the rough performance from Rodgers, a short-handed offense, and a should-be better defense, a rebound is due for the team. That is especially true for the four-time MVP.

The Packers are 9-0 in the LaFleur era after a loss in the regular season. That is an outstanding mark. Obviously, a lot of that has to do with Aaron Charles Rodgers. Last season, the California native threw six touchdowns and just one interception with a very solid QBR of 106.1 in the team’s three wins after a loss. This team does not play poorly after a loss.

They know how to respond almost immediately the next week. It starts with arguably the greatest quarterback of all time in Rodgers, who, very rarely, has back-to-back poor performances. So don’t expect another dud in Week 2.

Related: Robert Tonyan could be the key to success for Aaron Rodgers and Packers offense this season

Green Bay is the best bounce-back candidate this week among teams that lost in Week 1. A big reason for that is because they are hosting a rebuilding division rival in the Chicago Bears, who are coming into Lambeau Field riding high off of a 19-10 win against the San Francisco 49ers on Sunday.

Certainly, the most lopsided rivalry over the last decade has been the Bears vs Packers matchups. Chicago has not beaten the Packers in the Matt LaFleur era (last win came in 2018), and Green Bay has not lost at home to Chicago since 2015. The Packers have won 10 of their last 11 games against the Bears and are on a six-game winning streak.

And we all know Aaron Rodgers still owns the Bears. The legend is a dominant 22-5 in his storied career against ‘Da Bears, having thrown 61 touchdowns and just 10 interceptions in his 27 career games against Chicago. His QBR is a very solid 109.2, and he’s thrown just two interceptions in his last 15 games against them. He is the Bear killer, but he is an efficient Bear killer at that.

The moral of the story is that coach LaFleur has always had his team ready to go after a loss and his quarterback almost always responds in a massive way. The start to the season was disappointing for the Packers. However, it was just one game. Hope should not be lost at all. Chicago is very beatable, especially at Lambeau Field. Packers fans should see a better showing from their team on Sunday night.