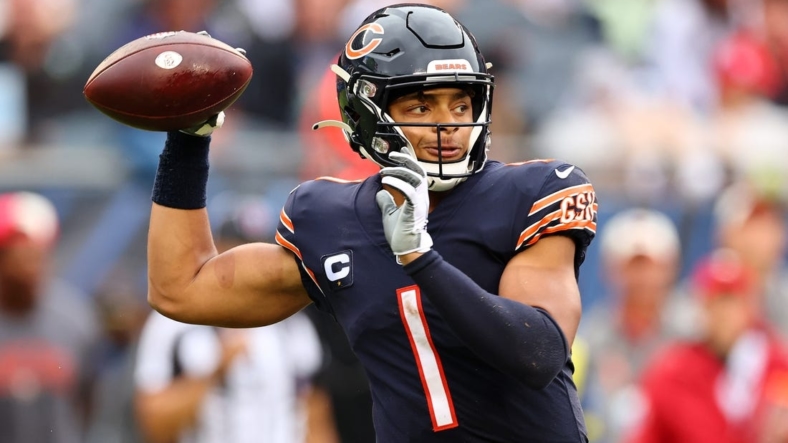 Justin Fields passed for two touchdowns, including the go-ahead score with 12:45 remaining, and the defense forced a pair of turnovers to boost the host Chicago Bears to a 19-10 victory against the San Francisco 49ers on Sunday afternoon.

The Bears fell behind 10-0 but Fields overcame early struggles to upstage 49ers counterpart Trey Lance, finishing 8-for-17 passing for 121 yards, two touchdowns and an interception in a soggy season opener.

Chicago took its first lead early in the fourth quarter, as Fields connected with Equanimeous St. Brown for an 18-yard TD. The Bears created a valuable cushion after Eddie Jackson intercepted Lance on the following possession, as Khalil Herbert capped a five-play, 21-yard scoring drive with a 3-yard TD run with 7:21 to go.

San Francisco turned the ball over on downs on its last two possessions and committed 12 penalties in the game.

The 49ers went up 10-0 when Deebo Samuel rushed for a 6-yard touchdown with 10:11 to play in the second quarter. Robbie Gould, a former Bear, connected on a 25-yard field goal with 8:22 left in the third.

Chicago responded on the ensuing possession for its first points of the season. On 3rd and 10 from near midfield, Fields scrambled to escape pressure and found Dante Pettis open on the right side of the field for a 51-yard touchdown.

Lance was 13-for-28 for 164 yards and an interception. He also led the 49ers in rushing with 53 yards on 12 carries following the exit of Elijah Mitchell (knee) in the second quarter. Jauan Jennings had four catches for 62 yards. San Francisco tight end George Kittle (groin) was inactive.

Herbert rushed for 45 yards for Chicago.

Footing loomed as an issue throughout the game, the first for the Bears under new coach Matt Eberflus and general manager Ryan Poles. Steady morning rain saturated the Soldier Field turf, a Bermuda grass that recently was installed.

Rain returned during the game, when a penalty related to the elements took the Bears out of field goal range. With Santos set to attempt a 47-yard field goal, holder Trenton Gill was whistled for unsportsmanlike conduct for bringing a towel onto the field to dry the kicking area. The penalty forced a Chicago punt in the final minute of the second quarter.