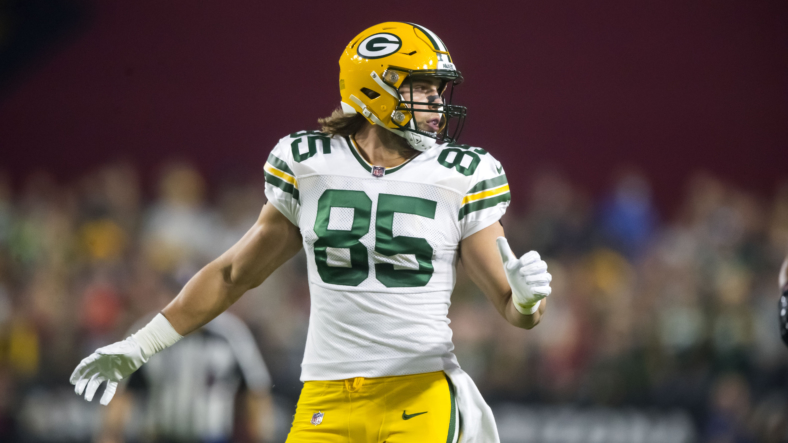 The Green Bay Packers are getting one of their top skill-position players back at the right time. Starting tight end Robert Tonyan will play in the team’s Week 1 matchup against the Minnesota Vikings on Sunday.

Tonyan is just over 10 months removed from a torn ACL that ended his 2021 season. An ACL recovery taking roughly 10 months doesn’t happen very often, yet Tonyan will be a full-go for this Packers offense to begin the year. History has proven that the former Indiana State star has come up big for Aaron Rodgers in recent memory, and he will be relied upon a whole lot on Sunday and for the rest of the season.

Let’s look at why the Packers can expect a big year out of Tonyan in 2022.

Robert Tonyan’s 2020 season is proof of his reliability

Before an injury-shortened season took place for No. 85 in 2021, he had a coming-out party in 2020. Tonyan led all tight ends with 11 touchdown catches that season. He also set career-highs in receptions (52) and receiving yards (586). The former undrafted free agent also set a career-high in catch percentage (88.1%). In other words, he does not drop passes. His catch percentage was perfect (100%) in the postseason, and he had eight receptions for 82 yards with a touchdown in that span.

Aaron Rodgers’ passer rating during the 2020 season when targeting Tonyan was 147.6. In the four years that Rodgers has been throwing to Tonyan, his passer rating is 127.6. These two guys do not disappoint when they connect for big plays.

Tonyan should have been selected to go to the Pro Bowl but was not. However, he played incredibly well and had a good start to 2021, which inspired Green Bay to sign him to a one-year deal to keep him in the fold for 2022 as he returns to health.

Related: Looking at Aaron Rodgers’ success against the NFC North under the microscope

How Rodgers will rely on Tonyan this year

Davante Adams and Marquez Valdes-Scantling are now in the AFC West. Green Bay’s offense is going to continue to integrate rookies Christian Watson and Romeo Doubs as the season moves along. Now with No. 1 receiver Allen Lazard doubtful for Sunday’s game against the Vikings, Tonyan is going to be a huge piece of Green Bay’s offense from start to finish.

He is going to have to be Rob Gronkowski to Tom Brady, Travis Kelce to Patrick Mahomes, or even Jermichael Finley to Aaron Rodgers.

Look for the fifth-year pass-catcher to line up a lot in the slot a lot. Tonyan’s spent the previous few seasons learning from veterans Jimmy Graham and Marcedes Lewis. The latter is a fantastic run-blocker and will do just that while Tonyan is in the pass-catching role. They are great complements to each other.

Tonyan’s career 11.5 yards-per-reception average just shows how he can be a huge threat down the field. Think of him as a stretch-four in basketball, someone who can be a versatile option for Rodgers. His 6-5, 240-pound frame allows him to play bigger than defenders, but he has the speed to shake defenders too. It’s a strong skill set.

This 2022 season is a contract year for Tonyan. He is fully healthy and ready to contribute to this offense in a big way. In his fifth season catching passes from Rodgers, No. 85 has played in Green Bay longer than Lazard, Sammy Watkins, Amari Rodgers, Doubs, and Watson and has a proven track record of reliability. Rest assured, Packers fans, he is going to be a big-time option for this offense.