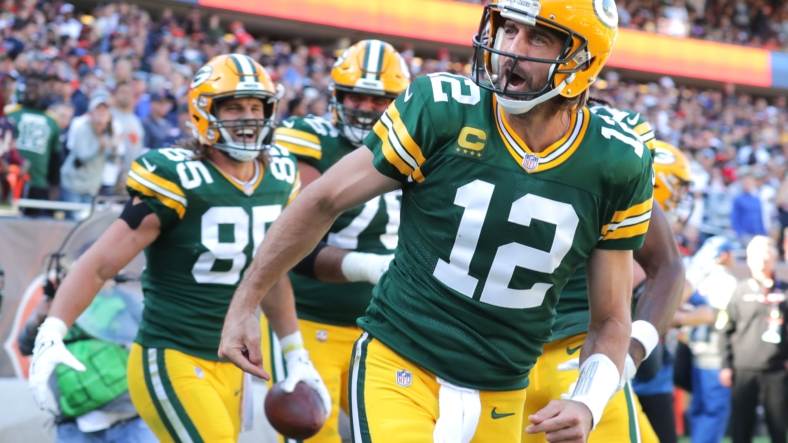 The Green Bay Packers are heading into their 28th matchup against the Minnesota Vikings with quarterback Aaron Rodgers at the helm. Although the Vikings have not gotten the brunt of Green Bay’s abuse on the field with Rodgers leading the way for a decade-and-a-half, the Packers have been the predominant leader in the division.

With No. 12 under center, Green Bay has won the NFC North eight times in Rodgers’ 14 seasons as the starting quarterback. His dominance in the division is one of the best marks in history. Let’s take a closer look at how well the former California Golden Bear in Rodgers has fared against his own division in his storied career.

Starting with the team that the Packers and Rodgers will be facing on Sunday afternoon, the Vikings have played them the toughest during the storied quarterback’s career. The Cheeseheads are 16-10-1 against the Vikings. The team from the Twin Cities has certainly been a whole lot more competitive than the Chicago Bears and Detroit Lions.

However, when the Packers have lost, it has not been the fault of Rodgers. His stats in this rivalry are ridiculous. Rodgers has an otherworldly TD-INT ratio of 8-1. He has thrown 56 touchdown passes to just seven picks for an interception percentage of just 0.8%. That means he has thrown an interception against the Vikings on less than 1% of his throws when the two teams meet. Absurd.

His career passer rating against Minnesota is 110.4. Out of 27 starts, Rodgers has had just one game against the Vikings in which he has thrown multiple interceptions. Yet, that game took place way back in October of 2010. The team might not be as dominant against the Vikings as they are against the Bears and Lions, but Rodgers certainly is.

Out of their 27 career meetings, Rodgers has thrown 61 touchdowns and thrown just 10 interceptions. His passer rating against the team from the Windy City is 109.2. This is supposed to be one of the best rivalries in all of sports, yet with arguably the best quarterback of all-time leading the way in Rodgers for Green Bay, it has been anything but that.

The former Butte Community College star, Rodgers has just been just as dominant and efficient against the Lions in his career. In the 24 matchups between Green Bay and Detroit when Rodgers has started, the Packers are 18–6. One of the things that makes No. 12 one of the best throwers of the football ever is his talent. More specifically, his arm strength.

No one understood that better than the Detroit Lions on December 3rd, 2015. With no time left, Rodgers broke the hearts of all Lions players and fans with a 65+ yard breathtaking Hail Mary to win the game.

Rodgers has a passer rating of 108.8 against the Lions with 52 touchdown passes to just eight interceptions. He has another ridiculous TD-INT ratio of 6.5-1. Absolute dominance. That is the only way to describe Aaron Rodgers when he takes the field against his own division.