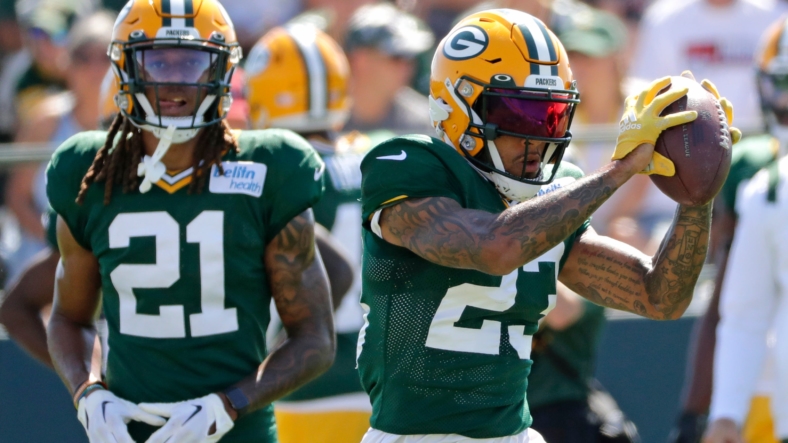 The prime NFC matchup in Week 1 of the 2022 NFL season is an old NFC North rivalry that has heated up recently. The Green Bay Packers will travel to Minnesota to face the arch-rival Vikings. Green Bay has won the NFC North each of the last three seasons and is 16-10-1 in games that quarterback Aaron Rodgers starts. Looking to dethrone the Cheeseheads, Minnesota will be taking more of a pass-first approach under new head coach Kevin O’Connell.

Minnesota Vikings offense will be hard to stop on Sunday

O’Connell has inherited a very talented offense with Pro-Bowlers all over the field. Kirk Cousins is back playing for his old QB Coach in O’Connell, who was with him in Washington. Dalvin Cook has had three consecutive 1,000-yard seasons. Tight end Irv Smith Jr. is a young athletic pass-catcher looking to prove he belongs after missing all of 2021 with a knee injury.

But perhaps the most important piece of the offense in Minnesota is the receiver position. Justin Jefferson and Adam Thielen are one of the best receiving duos in the NFL. They also have K.J. Osborn, who tacked on 655 receiving yards a season ago. The team’s recent trade for former Eagles starting receiver Jalen Reagor provides Minnesota with a solid No. 4 option if need be.

All of this goes to say, the Vikings have an offense that can put up points in a hurry. But how do they matchup up against the Packers specifically?

However, if there is a defense that can stop a talented wide receiver trio, it would be the one in Green Bay. The Packers appear to have one of the best cornerback trios in the league. Jaire Alexander is an All-Pro fresh off of a four-year extension he signed this offseason. Last year’s mid-season acquisition, Rasul Douglas, led the team with five interceptions a year ago. Talented second-year cornerback Eric Stokes had a very impressive rookie season too.

This Packers defense also finished tied for fourth in the league in interceptions with 18. There is no doubt that Green Bay has the defensive backs to not only run with the Vikings, but they have the defensive backs to run with any team. The Buccaneers with Mike Evans, Chris Godwin, and Julio Jones. The Rams with Cooper Kupp, Allen Robinson, and Van Jefferson. Neither should be a problem when Green Bay faces both of those NFC giants later this season.

Staying with the NFC North rivalry in Week 1, this game within the game between Green Bay’s cornerbacks and Minnesota’s receivers is going to be special.  It will be interesting to see how confident both sides are considering what state they are in. The Vikings offense is still trying to grasp this new offense that coach O’Connell is bringing in. The Packers defense is on the road in a place where they have only won twice in the six years of U.S. Bank Stadium’s existence (once with fans in attendance). It will be arguably the best positional matchup in that particular game on Sunday.

The Packers have finished top 10 in total defense (yards) each of the last two seasons. The Vikings finished 11th in pass offense last season. Sure, stars like Aaron Rodgers, Harrison Smith, Aaron Jones, Eric Kendricks, etc. will be taking the field on Sunday.  However, the key matchups in the game will take place on the outside when Jaire Alexander faces Jefferson and Stokes faces Jefferson. Buckle up. Week 1 in the NFC North is almost here.