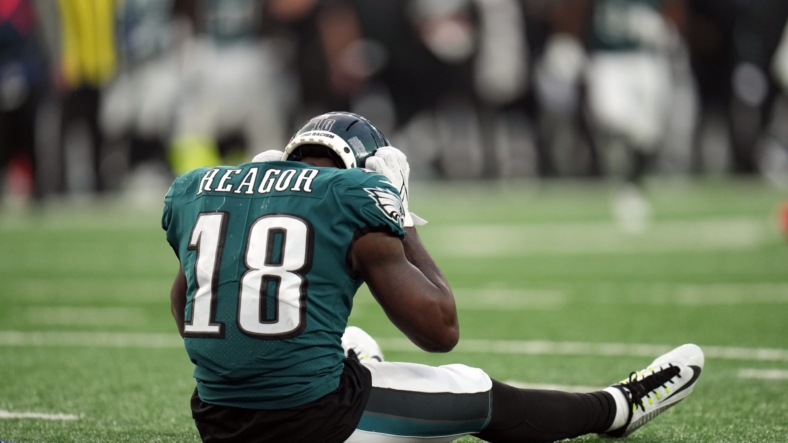 The Philadelphia Eagles have traded wide receiver Jalen Reagor to the Minnesota Vikings, parting ways with the 2020 first-round pick just a few years after selecting him ahead of Justin Jefferson.

Reagor entered the league with significant buzz as a dangerous vertical threat with a 4.47 40-yard dash, enticing the Eagles. In desperate need of playmakers, Philadelphia drafted the TCU wideout one spot ahead of Jefferson and four selections ahead of San Francisco 49ers receiver Brandon Aiyuk.

The decision backfired immediately. Reagor missed a significant portion of training camp with a shoulder injury then landed on injured reserve in late September due to a ligament tear in his thumb. He finished with 396 receiving yards and one touchdown in his first NFL season, while Jefferson racked up 1,400 yards in 14 games with the Vikings.

Philadelphia brought in a new coaching staff and made quarterback Jalen Hurts its starter, hoping it would help turn things around. While the Eagles’ offense saw significant improvement and the team made the playoffs, Reagor failed to make a positive impression on the coaching staff and quickly fell out of favor in the organization.

Offered a final opportunity to prove himself in training camp, Reagor spent the majority of his time with the backups. While he made the initial 53-man roster on Tuesday, Adam Schefter of ESPN reports that Minnesota acquired Reagor for a seventh-round pick in 2023 and a conditional draft pick in 2024.

After losing Bisi Johnson to a torn ACL, the Vikings needed a receiver. Reagor, who the team scouted before the 2020 NFL Draft, will receive a fresh start with his new team and should receive a few chances as the No. 4 receiver behind Jefferson, Adam Thielen and K.J. Osborn. However, he’ll also likely find himself behind Dalvin Cook and Irv Smith Jr. for targets. The 2024 fourth-round pick will become a fifth-round pick if Reagor fails to reach specific stats.

Wednesday’s trade serves as the Eagles waiving the white flag on a disastrous pick. The decision to draft Reagor over Jefferson will prove to be one of the biggest NFL Draft whiffs in recent memory, but the organization is still in a great position to compete this season.

Philadelphia acquired A.J. Brown during the 2022 NFL Draft to improve its offensive weaponry. Following the Reagor trade, Zach Pascal and Quez Watkins will step into more prominent roles as secondary wide receivers when the Eagles either rotate out Brown or DeVonta Smith.