What the Greg Monroe Signing Means for the Bucks

The Milwaukee Bucks signed an upper-echelon free agent. While you let that last sentence settle in for a second, let’s look at what the signing of big man Greg Monroe means for the previously downtrodden franchise.

By adding the former lottery pick on a three-year, $50 million contract, Milwaukee made it known that it will continue to be players for top-end free agents in the coming years. After all, Jason Kidd and company did beat out both the New York Knicks and Los Angeles Lakers for Monroe. Go ahead, wrap your brain around that.

This signing also comes just a day after Milwaukee ponied up a five-year, $70 million contract to re-sign Khris Middleton, who averaged 13.4 points per game while shooting 41 percent from three-point range last season. It also comes at a time when the Bucks have a tremendous amount of young talent.

Coming off a 2014-15 campaign that saw the team win 41 games and earn a playoff spot, the Bucks’ trajectory is pointed nowhere but up.

With Middleton locked up, the Bucks backcourt now consists is a solid young pass-first point guard in the form of Michael Carter-Williams, who was picked up from the Philadelphia 76ers during the 2014-15 campaign. Williams averaged 14.1 points, 4.0 rebounds and 5.6 assists per game after being sent to Milwaukee. Though, he is putting up nearly seven assists per outing during his career. Having a pass-first guy handle the rock in the same backcourt as a sharp-shooter in the form of Middleton is huge for the Bucks. 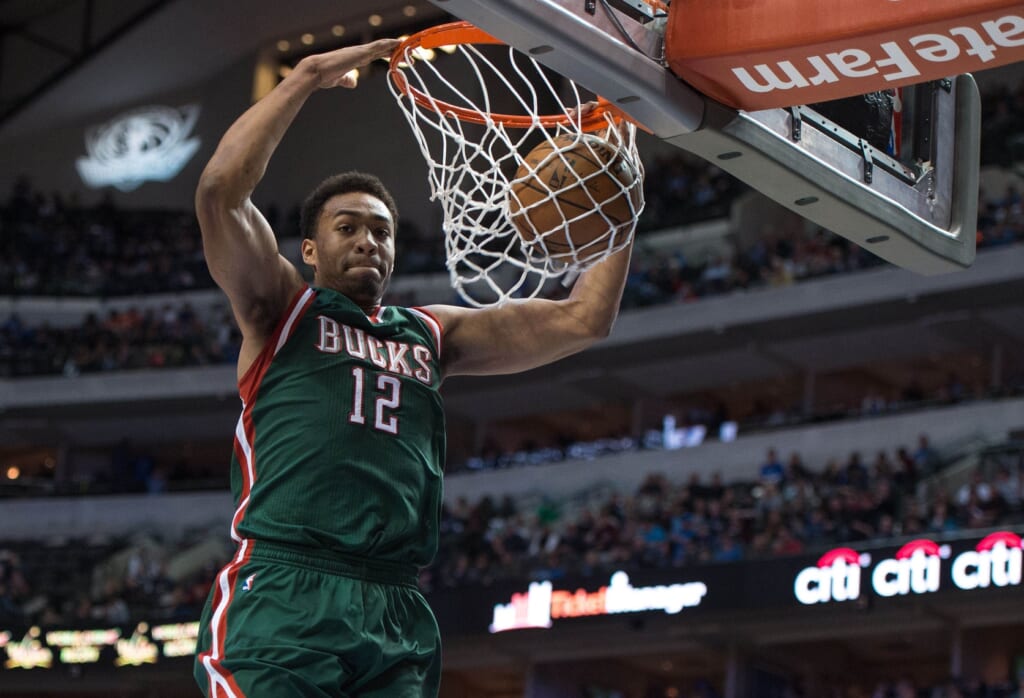 Courtesy of USA Today Sports: Parker and Monroe is not a bad one-two punch moving forward.

Monroe now joins a frontcourt already consisting of Jabari Parker, Giannis Antetokounmpo, John Henson and Zaza Pachuli. It remains to be seen where he will fit in, but it wouldn’t be surprising to see Antetokounmpo play small forward off the bench with Monroe at his natural power forward position and Henson/Pachulia competing for time at the five. Then again, Milwaukee could decide to play Monroe at center with the Greek Freak at power forward.

You also have this rather freakish possibility:

With the addition of Greg Monroe, the @Bucks will potentially have a tall starting lineup next season: pic.twitter.com/4rIJkb4d7P

Either way, it’s a great problem to have.

Monroe brings that toughness and solid inside scoring threat to the team. He averaged 15.9 points and over 10 rebounds per game while shooting 50 percent from the field for the Pistons last season. The veteran really is Milwaukee’s only low post figure that can create his own shot on a consistent basis. And depending on matchups, opposing teams may have to send a double his way, which would open up the outside for the likes of Middleton and Parker.

The Bucks' talented young core just became even scarier. I love the Greg Monroe addition and I can't wait to watch this team develop.

Even in the mediocre Eastern Conference, it’s a necessity to have two top-end players. While Monroe hasn’t exactly been that guy during his career, a lot of that had to do with a lack of fit in Detroit. He’s a talented big man. As it relates to Parker, it’s also too early to call him an upper-echelon player. Considering the former No. 2 overall pick missed the final 57 games of his rookie campaign, it’s going to be interesting to see how he rebounds and what type of progression he has made.

There are still some major question marks here. What does the team do with O.J. Mayo? How will the frontcourt rotation play out? With an ample amount of time to answer these questions, Milwaukee finds itself in the best position it has been in since George Karl was coaching Ray Allen and Vin Baker at the turn of the century.