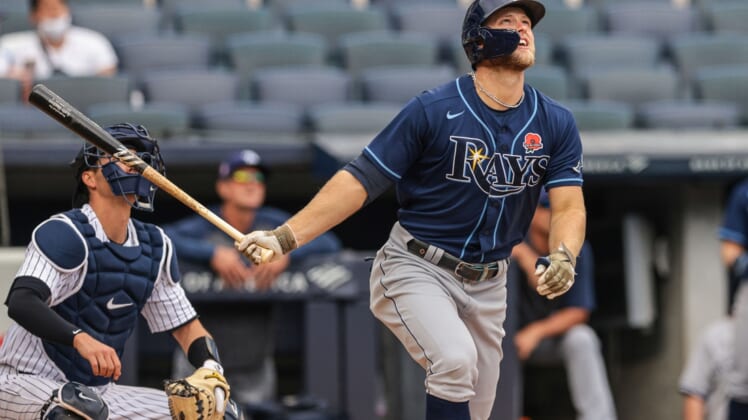 Rich Hill pitched five sharp innings, Kevin Kiermaier scored twice and the red-hot Tampa Bay Rays continued their dominance over the New York Yankees with a 3-1 victory Monday afternoon in the opener of a four-game series at Yankee Stadium.

The Rays won their fifth consecutive game and improved to 16-1 in their past 17 games since a 1-0 loss to the Yankees on May 12.

Hill (4-2) allowed three hits and beat the Yankees for the third time this season. He struck out two, walked two and needed just 56 pitches to face 19 hitters.

None of Hill’s pitches were over 90 mph, including 16 curveballs that were not thrown faster than 74.5 mph.

Kiermaier factored into two Tampa Bay runs off Jameson Taillon (1-4). He opened the third with a single and then scored on Manuel Margot’s double to the right field corner when New York second baseman Rougned Odor could not cleanly field the relay throw from Aaron Judge.

Austin Meadows opened the fourth by hitting Taillon’s first-pitch slider into the first row of the right-field seats for his 12th homer of the season.

The Rays added their third run in the fifth. Kiermaier opened the inning with a double over center fielder Brett Gardner’s head, moved to third on Brandon Lowe’s groundout and scored on Randy Arozarena’s single to left.

After Hill encountered little difficulties with New York’s scuffling lineup, Michael Wacha got five outs before the Yankees’ Miguel Andujar homered into the right-center field seats. Pete Fairbanks struck out Gardner with a runner on first to end the seventh.

Ryan Thompson fanned two in a perfect eighth. J.P. Feyereisen allowed a two-out single in the ninth to Odor but fanned Andujar for his third save since joining Tampa Bay on May 21 in a trade with the Milwaukee Brewers.

Taillon allowed three runs on five hits in five-plus innings. He struck out five, walked three and exited after the first two hitters of the sixth reached on a throwing error by Gleyber Torres and a walk.

The Yankees lost their fourth straight and fell to 1-6 in their past seven games following a 17-5 tear.