The Washington Wizards are in store for what promises to be a franchise-altering offseason. Star guard Bradley Beal will likely opt out of his contract and become a free agent.

While there were reports that Beal has already decided to re-sign with Washington on a deal that would make him the highest-paid player in NBA history, it’s no longer a foregone conclusion.

Assuming for a second that front office head Tommy Sheppard convinces Beal to re-sign, there’s still a lot of work for the Wizards to do. They are coming off a disastrous 35-win season and have the feel of a bottom-end playoff contender.

According to this report from NBA insider Marc Stein, the Wizards are one of several teams looking to trade a top-10 pick for a proven star.

Washington has the assets in terms of both future draft capital and young players to find another star to team up with Beal and Kristaps Porzingis. Below, we look at three ideal Washington Wizards trade scenarios for the 2022 NBA Draft.

Beal has had his fair share of running partners in the backcourt. Neither Russell Westbrook or Spencer Dinwiddie seemed to work out well in that role. In lieu of attempting to find a point guard of the future with the 10th pick, Washington opts to go big-game hunting. Murray was special a season ago for San Antonio. He is still only 25 years old and is just now entering his prime.

A core three of Beal, Porzingis and Murray would definitely have a nice feel to it in the nation’s capital.

As for San Antonio, it adds another top-10 pick in the 2022 NBA Draft and a fourth first-round selection altogether. Coming off a third consecutive non-playoff season, it’s time for the Spurs to build for the future. Adding a former top-10 pick in Deni Avdija would be a nice start. The Spurs could then flip Kuzma for more draft capital down the road. It’s a win-win. 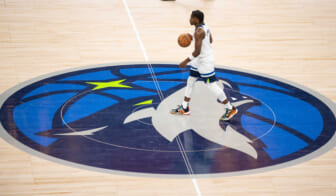 We go against the grain here and have Washington actually adding another first-round pick to the mix. The idea would be to pull off a separate trade with those two selections for another star player.

As for what Russell would bring to the table, he’s fallen out of favor in Minnesota and could be moved. With one more season on his current contract, Russell would also offer Washington financial flexibility moving forward. It’s not like he’s a bad player, either.

Minnesota’s inclusion in this deal is rather simple. Patrick Beverley can take over as its starting point guard next to stud youngster Anthony Edwards. The contending Wolves also add two valuable veterans to the mix in the frontcourt, retooling their depth chart in the process.

Related: NBA Draft trades we could see this month

Coming off a brutal 25-win season, Indiana is building for the future via a young backcourt of Tyrese Haliburton and Chris Duarte. The team now needs to find more help in the frontcourt. This trade would do just that.

Hachimura, 24, is one of the more underrated youngsters in the game. Through three seasons, the former top-10 pick from Gonzaga is averaging 13.0 points and 5.2 rebounds on 48% shooting. He’d be a great addition for the Pacers. The same thing can be said about the aforementioned Avdija.

As for the veterans heading to Indiana in this hypothetical trade, both KCP and Kuzma could net future draft capital in separate deals. Picking sixth overall, the Pacers also add another top-10 selection later this month.

Now, this would be a lot for the Wizards to give up. With that said, bringing in two All-Star caliber players at positions of need would round out Washington’s roster pretty darn well. In particular, Turner teaming up with Porzingis inside would be all sorts of fun.

For his part, Brogdon has been brilliant over the past couple seasons, too. He seems to be a perfect fit with Beal in the backcourt.