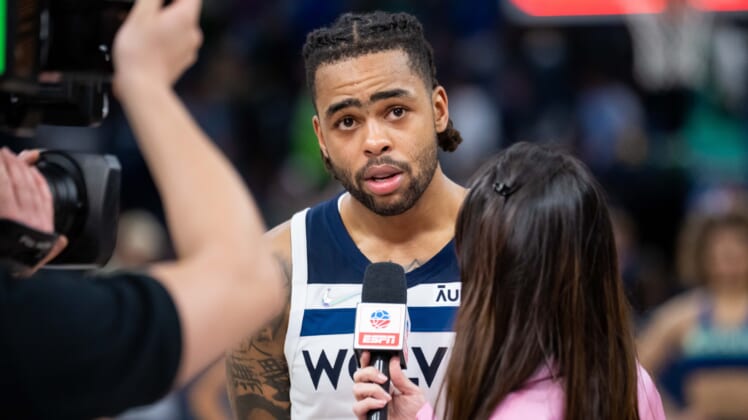 When the Minnesota Timberwolves pulled off a D’Angelo Russell trade with the Golden State Warriors about midway through the 2019-20 season, the expectation was that he’d form an elite pairing with best bud Karl-Anthony Towns.

While Minnesota had a tremendous amount of success in their second full season together, Russell himself now might be on the outs.

According to NBA insider Marc Stein, “numerous rival teams” expect Minnesota to try to trade Russell during the summer.

If true, this is a rather interesting development. Minnesota made its way through the play-in tournament and took the Memphis Grizzlies to six games in the first round of the NBA Playoffs. It’s just the second time these Wolves have earned a spot in the postseason since the end of the 2003-04 season.

However, Russell struggled big time in said playoff series. The former No. 2 pick of the Los Angeles Lakers averaged 12.0 points on 33% shooting in six games. He was also benched late in Minnesota’s Game 6 loss to the Grizzlies after shooting 3-of-7 with four turnovers in 27 minutes of action.

While front office head Sachin Gupta did work under former Timberwolves President Gersson Rosas when they made the trade for Russell back in February of 2020, he was not the ultimate decision-maker. Said trade, included the Wolves giving up All-Star Andrew Wiggins and a draft pick that the Warriors ultimately used on stud young forward Jonathan Kuminga.

For Minnesota, it might make sense to pull off a D’Angelo Russell trade this summer. There’s no telling how well he’s going to work with electric young guard Anthony Edwards moving forward. Finding a better piece to go with Edwards could be the thought process.

Below, we look at two ideal scenarios that would send Russell from the Twin Cities this coming summer.

We’ve known for some time that the Wizards have been looking to get Bradley Beal that perfect fit at point guard. Russell Westbrook proved that he wasn’t that during the 2020-21 season. It took less than a full season for Washington to realize Spencer Dinwiddie wasn’t an option before they moved him to the Dallas Mavericks back in February for Kristaps Porzingis.

For Washington, the Porzingis’ acquisition is interesting. It has the team set up pretty darn well in the frontcourt with youngsters Rui Hachimura, Deni Avdija aand Corey Kispert. Being able to add Russell to the mix for two forwards would round out this roster pretty well assuming Beal re-signs in free agency.

From Minnesota’s perspective, getting more frontcourt help for Karl-Anthony Towns (assuming he’s not traded) makes a ton of sense. Caldwell-Pope would provide even more defense out on the perimeter to go with Patrick Beverley, who would then replace Russell in the starting lineup. Kyle Kuzma is a capable four next to Towns, too.

Minnesota would be more than fine having Beverley take a bulk of the reps as the team’s starting point guard. After all, he did start 54 of 58 regular-season games a season ago. However, he might be better suited to bring that juice from the second unit.

If so, acquiring Brogdon as the centerpiece in said deal would be a coup for Minnesota. The cost of doing business here would be taking on Hield’s disastrous contract and ther remaining years of McConnell’s deal. Either way, a core group of Brogdon, Edwards, Towns, Jalen McDaniels, and Jarred Vanderbilt would be nice for Minnesota.

The Pacers have been linked to Russell Westbrook and his bloated contract as the team looks to free up cap space moving forward. Westbrook is likely to opt into his contract in 2022-23 — the final year of his deal. Moving players with multiple years left on their deals would help from a rebuilding and financial perspective.

Doing the math here, this could make perfect sense for Indiana. Russell and Beasley have roughly $47 million remaining on their deals. The trio of Brogdon, Hield and McConnell have $133-plus remaining. Adding two draft picks also helps expedite said rebuild.