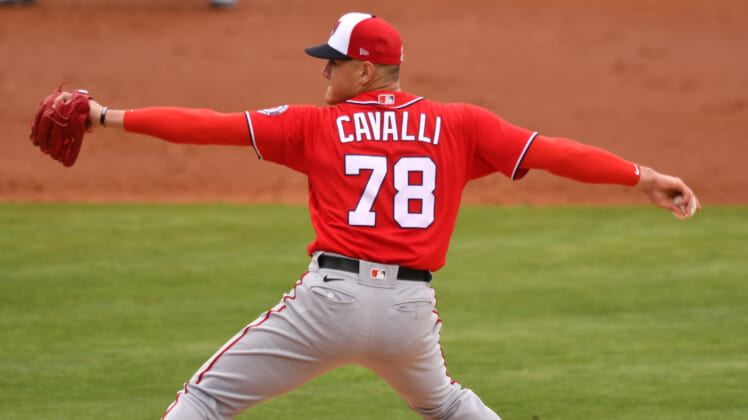 The Washington Nationals find themselves in another disappointing season, prepared to be sellers at the MLB trade deadline with fans simply hoping for a better future. While there are some promising pitchers in Washington’s farm system, several of the biggest names are currently sidelined.

Oftentimes, a young arm being shut down midseason suggests there is an injury. In many cases, the decision can be attributed to soreness in the elbow or shoulder. Given the amount of wear and tear that pitching arms experience, it’s always a reason for concern with young hurlers this early in their careers.

Because of it, fans have noticed what is going on in the Nationals’ farm system. Cade Cavalli and Cole Henry, two of the best arms in the minor leagues, have been kept off the mound in recent weeks.

Related: Why Armando Cruz can become one of the Washington Nationals’ best prospects

Cavalli, currently pitching at the Triple-A level, typically made a start every six days. But he hasn’t appeared in a game for the Rochester Red Wings since June 16.

The 23-year-old isn’t the only one not playing right now despite landing on the injured list. Henry, Washington’s 22-year-old righty and a borderline top-100 prospect, currently isn’t throwing. The Nationals promoted him from Double-A Harrisburg to Triple-A Rochester in June and he made two starts, but hasn’t been spotted by fans since June 11.

Related: 4 trades to help the Washington Nationals build for the future

On Friday, Nationals’ general manager Mike Rizzo provided an explanation to The Washington Post. Henry and Cavalli aren’t hurt, their arms are holding up nicely thus far. Instead, the organization is keeping them out of game action for maintenance and to keep them available all year.

It’s worth noting that the front office isn’t taking this approach exclusively with its pitchers. Brady House, the 19-year-old shortstop selected with the 11th pick in the 2011 MLB Draft hasn’t played a game in A-ball since June 11.

In some ways, the approach makes sense. Fans remember what happened in 2012, when the Nationals shut down Stephen Strasburg in September before the MLB postseason chase. Many criticized the move and it seems the organization is taking a new approach.

It’s possible that shutting down Cavalli and Henry midway through the season, it clears a path for them to pitch in September. While the Nationals won’t be competing for the playoffs, both pitchers could get a chance to make their MLB debut to close out the 2022 season.