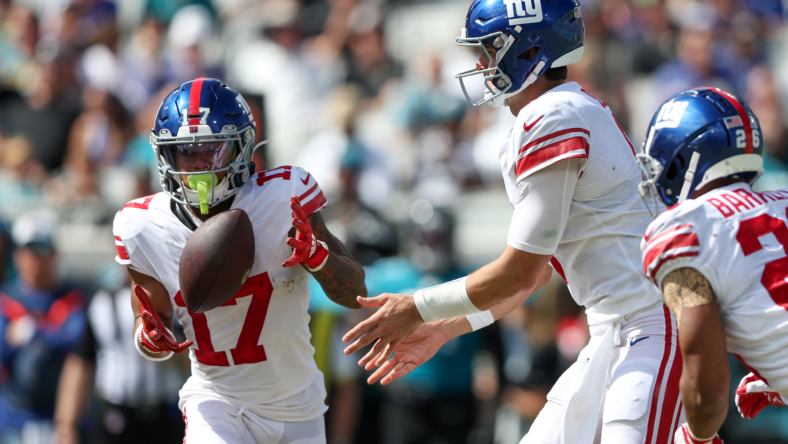 Sunday’s 31-18 loss to the Detroit Lions was by far the worst day of the Brian Daboll era with the New York Giants. Not only were the Giants sloppy and undisciplined in all three phases of the game, they suffered a rash of injuries.

One of those injuries was to rookie wide receiver Wan’Dale Robinson. Robinson was having the best day of his young career as he had a career-high nine receptions for 100 yards. This is the first time all season that a Giant had reached the century mark in receiving yards.

But the rookie receiver left the game in the fourth quarter with a knee injury and was helped back to the locker room by two members of the training staff.

While the severity of the injury is not known at this time, head coach Brian Daboll said that Robinson was in a lot of pain.

Even prior to Robinson’s injury, New York was thin at the receiver position and lacked a dynamic playmaker at the position.

Now with a cloud over Robinson’s availability for the remainder of the season, this might lead to contract negotiations with Odell Beckham Jr. to intensify.

It was reported over the weekend, that Beckham Jr. will make a decision to sign with a team after Thanksgiving. The two teams that were favored to land the 30-year-old wide receiver are the Giants and Dallas Cowboys.

As fate would have it, these two teams will play each other on Thanksgiving, leading some to speculate he might sign with the team that wins.

However, with the Giants being without Wan’Dale Robinson for at least the immediate future, this could prompt general manager to be more aggressive in trying to lure OBJ.

The biggest hurdle preventing a reunion with Beckham is that the Giants have just over $2 million in cap space. But there is one scenario where this could work, and that’s if Beckham is willing to sign with a team for the remainder of the season to show that he’s healthy.

After missing the first 11 weeks of the season, it’s highly unlikely a team would sign OBJ to a lengthy contract until he shows he’s fully recovered from his second ACL tear. So this bodes well for New York in trying to acquire its 2014 first-round draft pick.

If he can come back and be the player he was last year when he helped the Rams win a Super Bowl, he would easily be the most-talented receiver on New York’s roster.

If the Giants hope to make the playoffs and make noise in the playoffs, they’re going to have to make an upgrade at the receiver position in order to compete with prolific offenses.

New York has yet to score 30 points in any game this season, and if it stands pat it’s doubtful this will change.

It would take him time to build a rapport with quarterback Daniel Jones, but there’s still enough time left in the season for this to happen as the Giants get ready for a stretch run that they hope will land them in playoffs.

After the way things ended with Beckham and the Giants when they traded him to the Browns in March of 2019, it seemed unfathomable that a reunion would ever happen.

But now both need each other and a reunion makes sense for each party. We should find out sooner rather than later if Beckham will be back home with Big Blue.